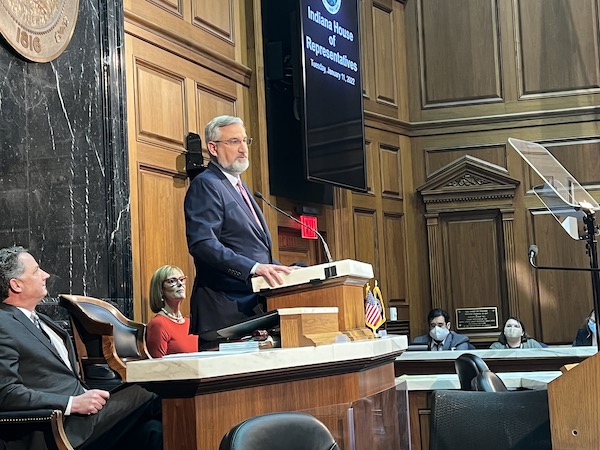 Indiana Gov. Eric Holcomb painted a rosy picture of the state’s accomplishments in his sixth State of the State address, and he outlined steps he wants to take to keep up that momentum while acknowledging lingering challenges from the pandemic.

The Republican governor’s speech offered a progress report on the state’s economic advancements and focused on his already-announced plans to improve the state’s quality of life through economic development, workforce development, improving public health and investing in infrastructure.

Holcomb touted the state’s strong economy, mentioning its nine straight balanced budgets, which he said had led to record reserves. Indiana ended the last fiscal year with $3.9 billion in reserves, triggering an automatic taxpayer refund of $545 million that will go back to Hoosiers.

“When it comes to our strong economy, we’ve earned it,” Holcomb said Tuesday night to a joint gathering of the Indiana House and Senate at the Statehouse.

Before the speech was even delivered, Indiana Democratic Party Chairman Mike Schmuhl criticized the governor’s take, saying it was federal aid from President Joe Biden’s American Rescue Plan that is a large reason for the state’s healthy financial condition.

Holcomb also detailed accomplishments of the Indiana Economic Development Corp., which he said secured $8.7 billion in new capital investments in the state and more than 31,000 in new job commitments.

A top priority on Holcomb’s agenda is cutting the 30% business personal property tax floor on new equipment, which he said would ensure Indiana is more competitive with surrounding states and maintain its status as a top manufacturing state.

The governor also is calling for revisions to the IEDC toolkit to customize tax incentives to each business and create an incentive program to attract more remote-worker jobs.

Holcomb touted Indiana’s population growth of 20,000 people in 2020, outpacing other Midwestern states that lost population. And while the state did grow, it lost population in more than half of its rural communities.

He referenced those population losses in his speech and trumpeted the READI regional grant program as a remedy. The program doled out $500 million in grants to 17 regions across the state to make investments to foster economic growth and  improve quality of life and place.

He said interest in the program, with local leaders requesting more than $1.5 billion in state dollars for nearly 800 projects, is enough reason to add more money to the program in 2023 when state lawmakers draft the next budget.

Another need for 2023, Holcomb said, is investing in public health. He said the newly-formed Indiana Public Health Commission will submit a report this summer with recommendations for the 2023 budget session.

Holcomb also heralded the state’s recent investments in education and workforce training, from the $1.9 billion in new dollars added to the state budget last year for K-12 education to the Workforce Ready and Employer Training grant programs.

Additional accomplishments noted during the speech were the state’s investments in infrastructure and capital projects, including $3.6 billion in planned road projects this year, $350 million in broadband expansion, and a $150 million investment in the expansion of walking, hiking and bike trails.

Holcomb avoided the more controversial topics that are dominating discussions this year in the GOP-controlled legislature.  The governor’s fellow Republicans are considering bills dealing with limiting employer vaccine mandates, prohibiting the teaching of certain subjects in schools and allowing more parent oversight on teachers’ lesson plans.

House Democratic Caucus Leader Rep. Phil GiaQuinta, of Fort Wayne, applauded the governor for leaving those divisive issues off his agenda, but added that he should use his influence as governor to exert some sway over legislators in his own party on those matters.

GiaQuinta also said it does not appear Holcomb has a road map for what he wants to do in 2022, based on his modest agenda and speech.

“I know it’s a short session, but I kind of have to ask then, you know, what’s our purpose here? Is it to continue on with these sort of divisive social issues?” GiaQuinta said.

He added that Holcomb should use his bully pulpit as governor to have some sway over what members of his own party do in the Legislature, instead of remaining largely silent on controversial issues.

Republican leaders in the House and Senate said that they share the optimism Holcomb painted in his address, saying they will work to pass the items on his agenda.

“It was wonderful to hear the governor’s message outlining all the tremendous things being placed across Indiana economically, in population growth, and so many other areas,” House Speaker Todd Huston, R-Fishers said.

Holcomb wrapped up his speech by asking Hoosiers to get vaccinated against COVID-19. He noted that two years into the pandemic, hospital emergency rooms are often full and try to divert ambulances to other locations and that the number of ICU beds in use is almost at an all-time high.

He thanked health care workers and other residents who are vaccinated, saying the vaccinated are a big reason the hospital network hasn’t collapsed.

Indiana’s COVID-19 death toll since March 2020 is approaching 20,000 people, which Holcomb pointed out is more than the populations of Indiana communities such as Huntington, Crawfordsville and Jasper.

“If you haven’t been vaccinated, I encourage, I plead, I even beg you to speak with your doctor and do so,” Holcomb said. “I say this, even if you’ve disagreed with every position I’ve taken. I just want us both to be around to continue those disagreements.”

While Holcomb asked for more to get vaccinated, House Republicans continue to push for legislation to restrict employer vaccine mandates. Huston said he did not think the bill was sending a conflicting message meant to discourage vaccination.

“Our bill tries to find that middle ground between respecting individual rights and business concerns. I don’t think it’s anything more than that,” Huston said.

Senate Democratic Caucus Leader Greg Taylor of Indianapolis said the governor’s rosy picture of Indiana left out the realities Hoosiers continue to face at home with the pandemic, specifically pointing to parents at home with sick children, or parents trying to find child care because of the pandemic.

“The governor’s address was alarmingly silent on the realities,” Taylor said.