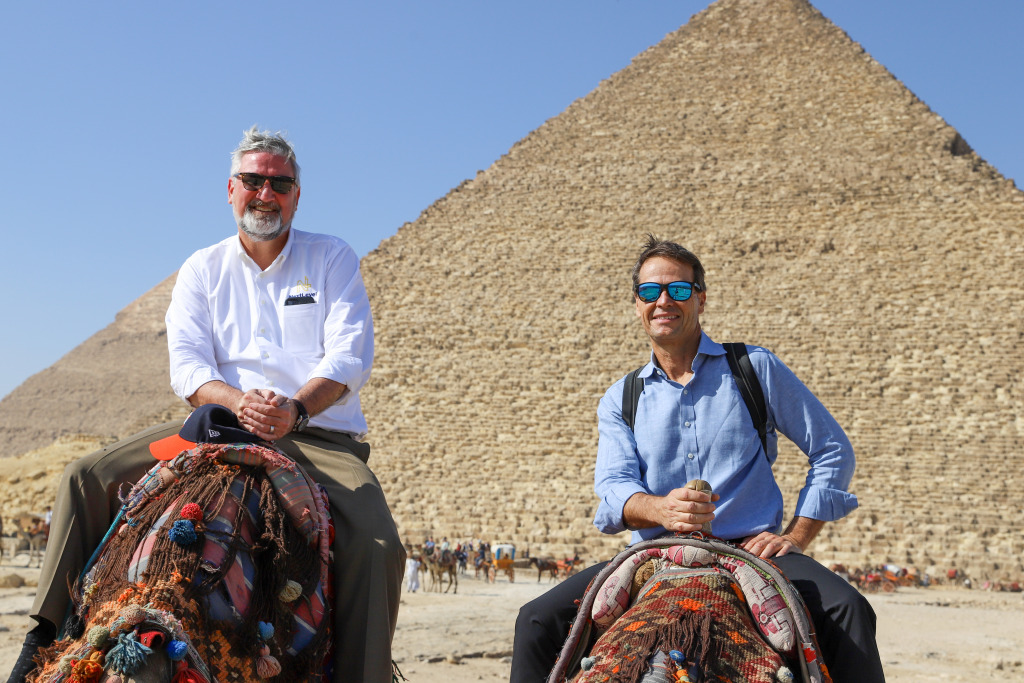 Gov. Eric Holcomb, left, and Secretary of Commerce Brad Chambers are in Egypt this week for the U.N. Climate Change Conference (photo courtesy of the governor's office).

Gov. Eric Holcomb attended the U.N. Climate Change Conference in Egypt this week, where he met with government officials, foreign dignitaries and business leaders to pitch Indiana as a state poised for green energy growth.

Holcomb and Secretary of Commerce Brad Chambers participated in a corporate roundtable at the conference, known as COP27, with energy companies and manufacturers doing business in Indiana, including General Motors, BP, and AES Corp. and other utility providers. Holcomb also delivered two keynote addresses in which he promoted the state’s clean energy initiatives.

While Indiana is making significant investments in solar energy—including a planned $1.5 billion, 13,000-acre solar farm in northwest Indiana, expected to be the largest solar energy operation in the country—the state still relies on coal for half of its energy needs and is the Midwest’s biggest emitter of carbon per capita. It ranks eighth in the country in carbon emissions per capita, according to the U.S. Energy Information Administration.

Holcomb declined to say whether he would support reintroducing net metering, believing that a balance needed to be struck between consumer affordability and cost-effectiveness for companies.

“We want to make sure that we’re not falsely goosing the market, but that the market is responding to consumer demand,” Holcomb told reporters in a Zoom call on Friday.

Indiana is also working with a Midwest coalition to try to land federal funding for a regional hydrogen hub. Holcomb said he listened with interest about a hydrogen energy project that was shelved in the United Kingdom before taking off in the Netherlands.

“It’s projects on the [hydrogen] front that we’re very interested in the northwest corner of our state,” he said.

The trip also comes as the state looks to recruit companies to a planned 7,000-acre innovation district in Boone County. When asked by a reporter about a possible electric vehicle manufacturer locating there, Holcomb said he “couldn’t disclose anything right now.”

“I will tell you, I’m bullish on the future,” Holcomb said. “I’m in the land of Egypt, where folks used to worship the Sun God, and the light of the sun is definitely shining down on Indiana right now.”

The governor has made several international trips this year, the costs of which have been paid for through private donations to the Indiana Economic Development Foundation, according to the the governor’s office. In August, he toured Taiwan and South Korea, and last month he traveled to Germany and Switzerland to advance business discussions with medical device companies in Indiana.

President Joe Biden addressed global leaders at the climate conference on Friday, saying that the United States “must lead by example” to avert a “climate hell.” His comments come as his administration ramps up efforts to force oil and gas companies to reduce their methane emissions.