Home » How to pick, prepare and enjoy cantaloupe, honeydew, watermelon and other melons 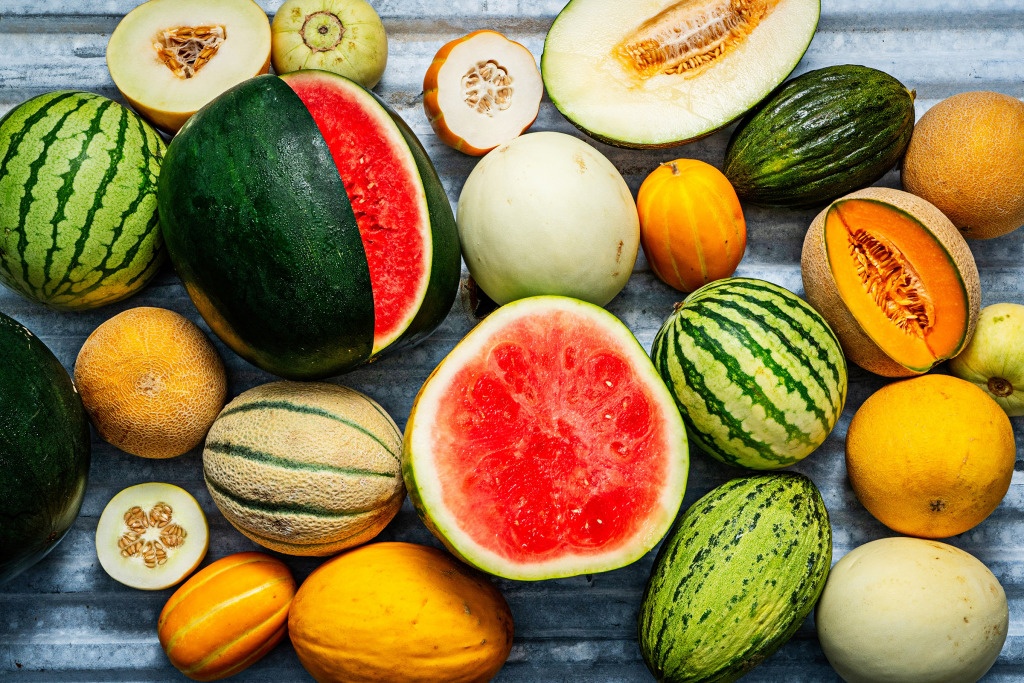 So many summer fruits and vegetables take on iconic status for the season. Tomatoes! Corn! Peaches! Summer squash! Do I need to put one on a pedestal above the others? Certainly not. Let’s just say they’re all great, but for this post, we’re going to train our lens on melons.

“They’re just coming into their glory,” says author, gardener and heirloom produce advocate Amy Goldman from her home in New York’s Hudson Valley. “There’s nothing in the world like an heirloom ripened on the vine in full sun with maximum sugar content. . . . They are so refreshing.”

Melons are no passing fancy for Goldman. She has been growing them for most of her life and in 2019 published a gorgeous, info-packed and coffee-table-worthy book simply called “The Melon,” featuring 125 varieties. (The portraits by photographer Victor Schrager alone are worth the price of admission.) “I’m trying to proselytize and sing the praises of these many-splendored fruits,” she says. Not that we need much convincing. Melons have a long, global history of cultivation and admiration. Here’s what you need to know to understand, pick and appreciate them.

A little background. Melons and watermelons are members of the gourd family, or Cucurbitaceae. They may be referred to as cucurbits, too. That means they share much in common with such relatives as cucumbers and summer and winter squash. Goldman says that cucurbits likely originated in Asia. Different varieties were cultivated and domesticated as they spread around the world, with Africa pinpointed as the most probable origin of watermelon. (If you’re really looking for a deep dive into the plant history, this article from New Phytologist, is a fascinating, if dense, read.)

What’s out there. Doing justice to the entire breadth of melons is impossible here. Particularly exciting are the heirloom varieties that people like Goldman are propagating to “bring back some of the simple culinary pleasures of the past and introduce them to a new generation of eaters and growers.” Beyond the commonly available varieties in the United States, there’s a wealth of melons, some sweet and some not, from around the world that you may be interested in growing or seeking out at specialty markets and farms. Here’s a quick glimpse:

– Cantaloupe. The melon Americans refer to as cantaloupe is actually a misnomer, though for the sake of clarity and common usage I’ll use it here. Technically, they’re muskmelons, part of a group characterized by the raised ridges, netting or corking on their skin. Some also feature deep grooves running from end to end. The vast majority of cantaloupe are orange-fleshed, though there are green-fleshed varieties, too, including Jenny Lind and Fordhook Gem. “True cantaloupe” are more common in Europe, Goldman says. They often have thicker, smoother skin and, at first blush, some more closely resemble pumpkins. Most true cantaloupe are orange-fleshed, such as the famed French Charentais.

– Honeydew. This favorite is one of the sweetest melons around. When harvested at the right time, it’s sublime, but an unripe honeydew is worse than a bad specimen of almost anything else. Honeydews are winter, or casaba, melons, which are less fragrant (hence the group name inodorus) and more storage-friendly than cantaloupe. Generally, honeydew is green-fleshed, though there are orange varieties. If you like honeydew, try expanding to close relatives including Santa Claus, an elongated, wrinkled melon (see the melon cut open in the top right and the smaller, dark green one to right of it, in the accompanying photo); Canary, another elongated and wrinkled melon that tends to pop up at farmers markets (second from left in the bottom row of the photo); and Crane, a soft-skinned winter melon carefully maintained by one California family since the early 20th century.

– Watermelon. These juicy summer classics are a more distant relative to the melons above. Known for bright flesh and sweet flavor, watermelons come in a variety of shapes, sizes and colors. Goldman is fascinated with the rind color patterns. One highlight is the Moon and Stars, whose skin and leaves are speckled with small and large yellow spots. Other than red or pink, watermelon interiors may be white (Cream of Saskatchewan), yellow (Early Moonbeam), orange (Orangelo) or a mix (Colorado Striped Tarahumara). Some may have even been cultivated more for their seeds for culinary or medicinal purposes, such as Killy Edible-Seeded and Arikara. Seedless varieties are, of course, available – and contentious. Count Goldman among the many who favor seeded varieties. Spitting the seeds is “half the fun,” she says.

– Others to consider. The three genres you find most in American markets are just the tip of the iceberg when it comes to melons. Goldman mentions snake melons, long specimens that resemble cucumbers and can similarly be used in salads or pickles. The Makuwa group of melons are staples in Asia and can be extraordinarily sweet when mature. At your local Asian market, you may be able to find Korean melons (Chamoe), which sport a yellow grooved skin (bottom left of the photo above), and Sakata’s Sweet (second from left in the top row). Some varieties are sheer novelties. Goldman loves to talk about the Queen Anne’s Pocket Melon, which makes for insipid eating but has an enticing aroma that prompted women in the past to carry them around in their pockets as a type of perfume.

– Picking a good one. Choosing a melon that is ripe when you buy it is key, Goldman says. Melons don’t have starches that will convert to sugar after they’re picked, so to get the best flavor, you want to choose a melon at its peak sweetness. Texture and aroma can improve after harvest, though even those won’t necessarily salvage bland flesh.

Much depends on how the melon was grown and harvested. The fact that some melons are harvested while not fully ripe to ensure they survive shipping means there are plenty of mediocre specimens for sale. That’s one reason melons are prime candidates for buying locally when and if you can. Still, whether you’re buying them at the farmers market or supermarket, there are things to look for when shopping.

Watermelon may be the one with the most lore attached to it. Slap it and listen for a hollow sound? Goldman and others don’t think this subjective test is a reliable indicator, though if it sounds sloshy, it’s overripe. Instead, Goldman suggests looking for a yellow, not white or light green, spot on the underside of the melon where it rested on the ground. If the darker green stripes or spots are tinged too yellow, that’s an indication of sunburn and a sign that the melon has sat outside too long. A good watermelon should be gently rounded on the ends with a dull, not overly shiny, skin. It should be heavy for its size.

American cantaloupe has more tells. These muskmelons should have a pleasant aroma and will yield but not break to gentle pressure applied at the blossom end, Goldman says. When the raised netting on the skin is dense and evenly distributed, the melon will have better flavor. Skin color more yellow than green is another sign of maturity.

Skin color on honeydew can be useful, too. Look for a creamy instead of green tinge. Honeydews don’t give off a telltale aroma. The blossom end pressure test can help. According to Goldman, “Knowing how to judge a ripe winter melon is an art.”

Regardless of what you’re buying, avoid melons with bruises, soft spots or other signs of damage.

– Storing. Melons in general are sensitive to ethylene, a hormone in the form of gas that hastens ripening and eventually rot. (Again, this will affect texture and possibly aroma more than flavor.) That’s why you want to store them away from other ethylene-producing food, such as apples and bananas.

Some melons, including summer melons such as cantaloupe, are climacteric, meaning they respond to the presence of ethylene by producing more ethylene themselves. That makes them particularly perishable, as well as problematic when stored near other ethylene-sensitive produce, such as tomatoes, peaches, summer squash and greens. The shorter shelf life means they will only last a few days whole on the counter, after which they are best stored at 36 to 41 degrees Fahrenheit. They also like a high relative humidity, so try placing cantaloupe in the refrigerator crisper drawer, the University of California Division of Agriculture and Natural Resources says, where they should last about five days, give or take depending on the degree of ripeness.

Watermelon and winter melons, such as honeydew and canary, are non-climacteric, so they ripen more gradually and have a longer shelf life, as long as several months with some varieties. Goldman says watermelon can last 2 to 3 weeks at 60 degrees and winter melons 3 to 4 weeks at 45 to 50 degrees. For many of us in summer, that’s warmer than the fridge but much cooler than ambient room temps, unless you happen to have access to a nice, chilly root cellar. Otherwise, realistically you’re looking at perhaps a week whole, uncut on the counter and then no longer than a week cut in the refrigerator.

The more melons are cut, the more rapidly they deteriorate, so consider leaving them as intact as you can in the fridge (and in the case of honeydew and cantaloupe, leaving the seeds in the uncut portion).

– Preparation. Because they grow so close to the ground, melons can be a source of bacterial contamination, which is why you want to take care to wash the outside. Cutting into an unwashed melon can drag harmful bacteria into the flesh. Wash melons under cool running water, ideally scrubbing with a clean vegetable brush. Don’t use soap or bleach. University of California Division of Agriculture and Natural Resources notes that the netted surface of cantaloupe provides an ideal hideout for bacteria, so pay special attention to scrubbing those spots. Dry well with clean dish towels before cutting.

There is no wrong way to cut a melon. For cantaloupe and honeydew, I tend to rest them on their longer side and just cut wedges as I need them. If you’re worried about wobbling, you can cut the stem end off and set it face down on the counter and then cut wedges vertically from end to end, as the University of California folks suggest. Large watermelons are particularly versatile, with plenty of ways to turn it into wedges, cubes and sticks. Feeling fancy? You can ball any melon, with a tool designed for the job or even a small disher.

– Serving. You’ll get no argument from me if all you want to do is have melon in its raw, unadulterated form. Still, there are plenty of ways to expand your repertoire should you so choose. If you’re stuck in a gazpacho rut, try chilled melon soup, such as Coconut Melon Soup. Other ways to slurp: Two-Melon Shake, Summer Watermelon Punch and Watermelon-Basil Agua Fresca. Prosecco-Spiked Melon With Basil is an elegant, light dessert. For an equally elegant, light appetizer, make Watermelon With Herbed Goat Cheese Whip. Melons are naturals in slaws or salads, especially when paired with their cucumber cousins.