Home » Q&A with Paul Mendenhall: ‘I can’t believe anybody actually hired me’ 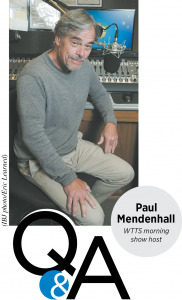 Hoosiers have been hearing Paul Mendenhall’s your-buddy-next-door voice for more than 40 years over a long string of radio frequencies. His early career as a DJ included stints at WXLW-AM 950, working for legendary marketer Bill Shirk, and midday host for WNAP-FM 93.1 during its free-wheeling days as “The Buzzard.”

Bloomington-based WTTS-FM 92.3 hired him in 2001 for weekend work, and he quickly shifted to the prime morning spot, becoming the first voice many Hoosiers hear when they wake up. In May, he was inducted into the Indiana Broadcasters Association Hall of Fame. Now 65, he plans to retire from radio in January.

Just yesterday, I was asking myself the same thing. I’ve been around radio studios all my life. But I just feel like it’s time. I’ve done this for nearly 20 years here at WTTS. I’ve been getting up at 3:00, 3:30 in the morning. I get tired, honestly, by the end of the day, and I just felt like it was time to maybe do something else.

Do you have some projects?

I bought an old bank building in Gosport, Indiana, and there’s a million projects there, and new ones are created every day. I have an investment partner who shares the building with me. And she lives upstairs; I live on the main floor. And we’re just kind of slowly rehabbing this building. And it is a weird, charming little town.

How do you think you’re different as a broadcaster today than you were when you first started?

I listen to those old tapes and I can’t believe anybody actually hired me. I hear a guy that tried too hard, that forced his voice to talk like a radio guy. Bill Shirk helped me get out of that. He gave me a very simple trick. In radio, we have to wear headphones to hear what’s going on. He says, “Just take one headphone off and you’ll hear yourself talking. If you’re not talking like you normally would talk to a close friend or somebody 2 feet away from you, then you’re forcing it.”

Do you have a favorite song, about Indiana or that mentions Indiana?

John Mellencamp, for many years, was my favorite artist. I think he really nailed it as far as the experience of living in the Midwest or the state of Indiana. He had a song called “Peaceful World” that mentions Indiana. That one came to mind right away. I also tremendously enjoy John Hiatt.

What should you be remembered for?

I think what I may be remembered most for will be a reassuring voice, a comfortable voice. It’s like, “Hey, you’re starting a workday, things are messed up, things are weird. We’re in this COVID-19 thing. The presidential election is not decided. We don’t know what’s gonna happen. But, hey, I’m here for you. And we’re gonna muddle through this.”

The last feature I’ll be part of is “WTTS: A to Z.” We’re playing 2,500 songs and some really, really deep stuff. There’s talk that they’re going to let me pick a song in each letter that will be my song, and there might be prizes involved. And on my last day, what are they gonna do, fire me? Maybe I’ll do something crazy.•

One thought on “Q&A with Paul Mendenhall: ‘I can’t believe anybody actually hired me’”