Home » Indianapolis’ next reservoir ‘an insurance policy’ for dry periods 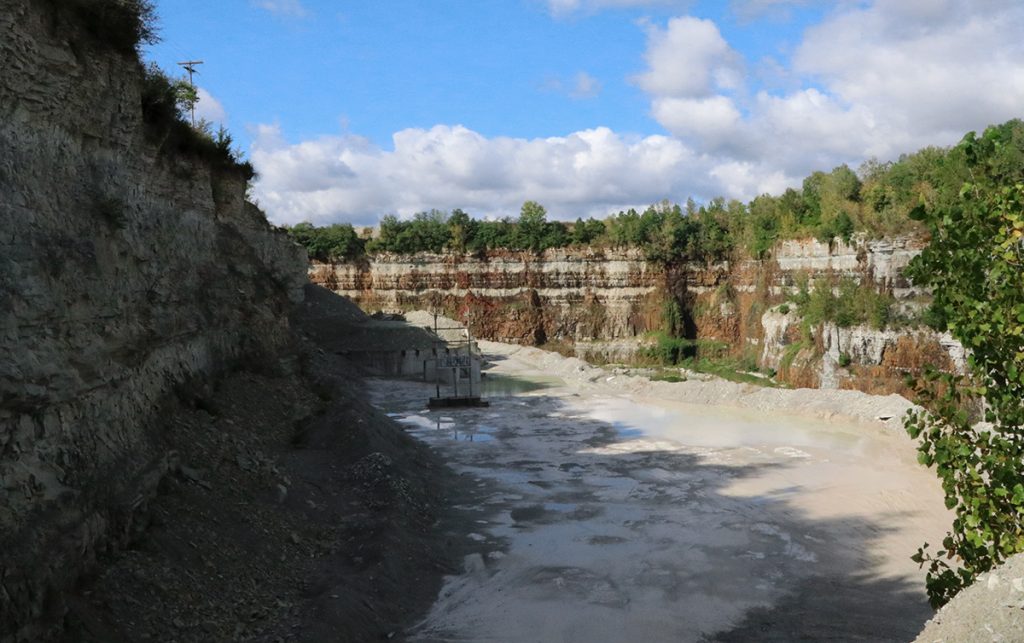 Citizens Reservoir will occupy a fraction of the acreage of neighboring Geist Reservoir, but it will be about 20 times deeper. (Photo courtesy of Citizens Energy)

It’s not much to see yet—just a deep, empty pit with rocky walls and a few puddles on the bottom. But in a year or so, the 230-foot-deep former limestone quarry in Fishers will be outfitted with pumps, pipes and tunnels, and filled with 3 billion gallons of water, making it the newest reservoir in central Indiana.

Indianapolis-based Citizens Energy is constructing the reservoir as a backup water supply during droughts or periods of high water consumption. When completed, the 88-acre project, called Citizens Reservoir, will be able to pump up to 30 million gallons a day of captured rainwater into nearby Geist Reservoir. From there, the water will flow over a dam into Fall Creek and Citizens’ water-treatment plants in Indianapolis.

“It’s really an insurance policy,” said Dan Considine, spokesman for Citizens Energy. “The water will be there when we need it.”

The utility is spending more than $20 million to convert the quarry into a reservoir. The construction project is the latest and perhaps most visible sign that Indiana is trying to keep up with growing demand for water from households, stores, factories, farms and golf courses—even as its aging water infrastructure allows tens of billions of gallons to seep into the ground annually.

So far, Indiana has largely avoided the water crises faced by states such as California, New Mexico, Arizona and Colorado, where droughts and global heating have lowered the water level in lakes and rivers as people use water faster than it is replaced. California suffered an extended drought from 2011 to 2017, and is expected to see continued population growth at the same time warming temperatures decrease snowpack, according to the not-for-profit research organization World Resources Institute, based in Washington, D.C. 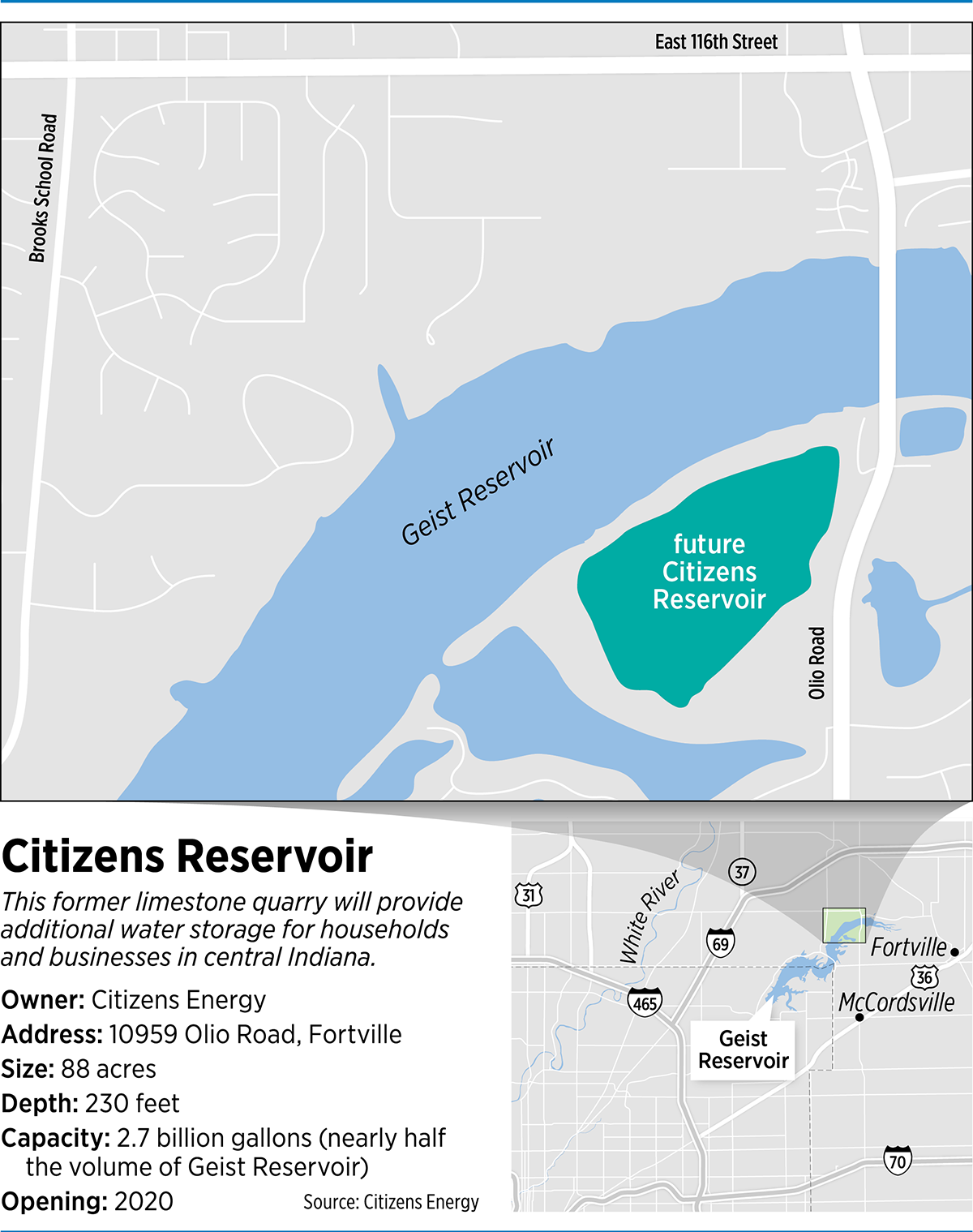 But even in Indiana, water experts have been pushing the state to increase its water supply. Over the past three decades, Indiana’s population has grown 21%, and water consumption by households and businesses has increased 9%. Water consumption for farm irrigation has surged 158%.

And Indianapolis, the state’s population center, is one of the largest U.S. cities not located on a major lake or deep river.

The U.S. Environmental Protection Agency forecasts that Indiana’s population will grow another 12% over the next 30 years. “With competing demands on limited water resources, more and more ground and surface water sources may be used beyond their ability to replenish themselves,” the agency warns on its Indiana Water Fact Sheet.

Also, the state’s water infrastructure is in need of billions of dollars of modernization. Environmentalists say water quality here is threatened from overstressed sewage systems and inadequate treatment of animal waste on farms.

Meanwhile, the Indiana Department of Environmental Management has 12% fewer employees than it did a decade ago, and its Office of Water Quality is struggling to keep up with the workload of enforcing water-quality rules. That means fewer people are checking groundwater, lakes, rivers and wetlands to make sure surrounding homes and businesses are not contaminating important water sources.

That’s not to say no one is paying attention. Five years ago, the Indiana Chamber issued a groundbreaking report that said the state had to do a better job managing its water supplies to make sure businesses and residents have ample availability in the decades ahead. It said the central part of the state has diverse water supplies, but population growth projections show as much as an additional 50 million gallons per day will be needed by 2050.

“The goal was to raise awareness and get some investment in Indiana’s water supply,” said Greg Ellis, vice president for energy and environmental policy for the Indiana Chamber. “Citizens Energy is ahead of the game and is acting on this need. Others need to do the same.”

The issue is critical for Indiana, a state deeply dependent on water, despite its fairly modest size. Indiana ranks first in the nation in the percentage of its economy that depends on water, largely due to the state’s concentration in manufacturing, which uses huge amounts of water for fabricating, processing, washing and cooling products, according to a 2014 study by the University of Michigan.

The quarry where Citizens Energy will construct the reservoir formerly was owned by Irving Materials Inc., which used it to supply limestone for more than five decades before shuttering the operation last year.

At 88 acres, Citizens Reservoir pales in comparison to nearby 1,800-acre Geist Reservoir. But at 230 feet deep, it is nearly equivalent to the height of the Soldiers and Sailors Monument downtown. Geist Reservoir, which was made in 1943 by damming Fall Creek, is only 10 to 12 feet deep.

The backup reservoir is to be called into action in severe droughts like the one that hit central Indiana in 2012. By early summer that year, Indianapolis had set a record for the highest temperature in June, hitting 104 degrees. Temperatures continued to sizzle, hitting 105 degrees on July 7, making the month the warmest on record for the city.

Meanwhile, weeks went by without rain. By the end of June, much of central Indiana was classified as having severe drought. The heat and 6- to 10-inch rainfall deficit across the state dried up many creeks and shallow lakes.

Officials issued burn bans in every county, and many communities imposed mandatory water restrictions. Farmers in nearly half of Indiana’s counties were declared eligible for federal disaster relief because of the toll the drought took on crops and livestock.

By July, Morse Reservoir, in northern Hamilton County, fell 3 feet, closing the beaches and putting a stop to boating. Geist Reservoir was down 18 inches and Eagle Creek was down a foot.

“With a new reservoir, we hope we can avoid these kinds of problems when the next drought comes,” Considine said.

The Indianapolis area normally receives about 42 inches of rain a year, but the water supply is not always available when needed, the utility said. Heavy rain in excess of Geist Reservoir’s storage capacity now flows downstream over the dam that leads into Fall Creek. Dry periods can strain stream flows and reservoir supplies.

Citizens hopes the new reservoir will address both problems. When rainfall exceeds Geist’s capacity, an intake structure will be able to divert 100 million gallons a day of otherwise unused water into Citizens Reservoir.

During dry periods, up to 30 million gallons a day of the stored water can be pumped from Citizens Reservoir back into Geist Reservoir.

Weather extremes in either direction can create danger to the water supply. Tens of thousands of Hoosiers get their drinking water from private groundwater wells, and severe storms and flash flooding could contaminate the groundwater with bacteria from septic systems and overworked sewers.

“The biggest challenge in Indiana to clean water is the changing climate,” said Dr. Indra Frank, water quality director for the Hoosier Environmental Council. “We’re seeing much more precipitation, more extreme storms, and it will mean more problems with flooding.”

Despite not sitting on a major lake or deep river, Indianapolis is rich in other water sources, experts say. That includes several drainage basins and reservoirs “and seemingly plentiful and inexhaustible groundwater,” said Clarke Kahlo, program director of Protect our Rivers Now, an Indianapolis-based not-for-profit conservation advocacy group.

“Generally, it appears that water supply is being prudently managed,” said Kahlo, a frequent critic of Citizens Energy.

Yet, even if Indiana water utilities manage to regulate supply and demand perfectly, another challenge looms: the decrepit state of much of Indiana’s water and wastewater infrastructure—chiefly the underground pipes that carry water to households and businesses. Some pipes are more than a century old and leak water into the ground at an astounding rate.

According to the Indiana Finance Authority, the state faces an immediate need for $2.3 billion in water system repairs, and a long-term need for another $815 million a year for maintenance to protect health and cut the loss of 50 billion gallons of water leakage a year.

For the past year, a state task force composed of four legislators, six water industry experts and the Governor’s Office has been analyzing the condition of the state’s water and wastewater system and looking for a way to pay for repairs. This summer, Gov. Eric Holcomb signed two bills to address the situation.

One law encourages a regional water planning approach to work with local utilities to examine water loss caused by deteriorating infrastructure. The other law creates a Water Infrastructure Assistance Fund. The fund will take $20 million out of the state’s general fund each year and put it toward a loan program and other financial assistance for communities doing water infrastructure projects.

“The cost to repair the water infrastructure is going to be enormous,” said Ellis of the Indiana Chamber. “It’s such a high cost that most businesses and residents cannot take the entire impact. The next big challenge will be finding a way to pay for reliable water that is available to all who need it, and can make Indiana attractive to new businesses that are considering moving or expanding here.”•