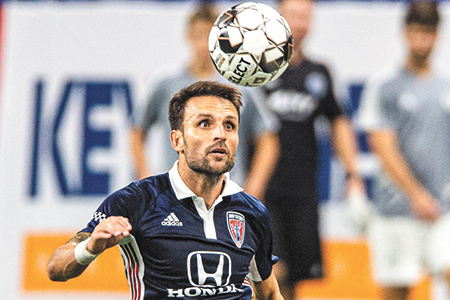 With its chances of joining Major League Soccer in question, Indy Eleven is considering significantly cutting the number of seats with which its new stadium would debut.

The shift—which could see the venue open with about 12,000 seats, rather than the 20,000 originally planned—comes as the franchise works toward a construction, ownership and management agreement with the city of Indianapolis and the Capital Improvement Board.

Serious discussions between the parties began late last year, several months after the Indiana General Assembly approved a funding mechanism for a soccer stadium that would use tax revenue generated from a related development.

But the city says any deal is on hold until the team answers a few major questions, including where the stadium would be located and when it would open, whether the franchise expects to be part of MLS by the time it opens, and how Indy Eleven would pay for its portion of the stadium.

The team says it is actively working on answers to all the questions.

Greg Stremlaw, CEO of the Eleven, told IBJ the franchise recently narrowed its list of potential locations to three, with hopes of announcing a decision “in the coming months.” But the team isn’t willing to say where it’s still looking.

“While the site selection process is still ongoing, Indy Eleven has been working diligently to secure a final site … and has narrowed [it] down to three locations in Marion County,” Stremlaw said.

The city and the CIB—the quasi-governmental Marion County entity that would own the stadium—in mid-October requested a stack of information from the team, including:

◗ A timeline for when play will begin in the venue and whether the team will be part of the USL Championship league (as it is now) or MLS, along with a commitment to remain in Indianapolis long term. The Indiana Pacers and Indianapolis Colts have made similar commitments.

◗ Details on funding the team will use to pay for its 20% share of the stadium’s estimated $150 million to $200 million in construction costs, as required in the Legislature’s funding bill.

The request, part of a letter authored by CIB outside counsel Mary Solada, included an attachment titled “Soccer Fiscal Matters” that discussed the economic structure required for a deal.

“While we are happy to discuss further with you … the concepts set forth in the attached are essential from the City/CIB view,” Solada wrote in the letter.

The CIB would not release a copy of the attachment, saying it was not required to do so because the information is pertinent to an open economic development matter, which is an exemption in the state’s public record law.

In addition to Indy Eleven’s construction contribution—expected to be $30 million to $50 million—the team’s principal owner, Ersal Ozdemir, is working to finalize financing for a $400 million mixed-use venture called Eleven Park that would surround the stadium.

Tax revenue generated within Eleven Park is the primary funding source for the stadium, making the development’s construction and success essential to the stadium.

Up to $9.5 million per year in tax revenue generated at the site would be used to pay off bonds issued for the stadium’s development, with payments sunsetting after 32 years.

Both the team and public officials have declined to estimate when a deal might be executed and stadium construction could begin.

When the Eleven Park concept was announced last January, Ozdemir said he hoped to start playing in a new stadium in the 2022 season. It’s now likely that date will be pushed back at least one season as talks continue, sources said.

Indy Eleven officials have met at least six times since September (including at least once this month) with the Mayor’s Office and the CIB, according to public records obtained by IBJ. Most of those meetings have been to discuss the information requested by the city in October—including which sites are on the team’s radar.

The city deferred questions about the substance of the meetings to the franchise and Keystone.

“Indy Eleven and Keystone continue to meet with the city regularly to provide updates as they continue to work to finalize a development plan,” Taylor Schaffer, the mayor’s deputy chief of staff, said in an email to IBJ.

Indy Eleven made a bid in 2017 to join Major League Soccer but the league chose several other cities for expansions scheduled over the next several seasons.

Now, with its prospects of joining MLS diminished—at least for the next few years—the Indy Eleven is considering a stadium design that would let the team open play with fewer seats than originally planned.

Stremlaw said the team is eyeing no fewer than 12,000 seats, adding it “will be built to ensure we can properly accommodate the fan base associated with leading the USL Championship league, but also be able to expand to all MLS specifications if and as needed.”

The possibility of fewer seats has been on the table since the Legislature removed a stipulation tying funding for the stadium to an MLS deal—but Stremlaw’s comments mark the first time the team has publicly acknowledged the possibility.

The 12,000-seat mark is the upper threshold for most USL Championship stadiums, including the one Louisville City FC will call home starting this spring.

The figure is also a small step above where Indianapolis finished in average home attendance in the 2019 season—at 10,734 fans per game. Its largest-ever home crowd came during last season’s opener, which drew 20,251 fans to the 67,000-seat Lucas Oil Stadium.

MLS will have 30 teams by the end of 2023: Nashville, Tennessee, and Miami will join this season; Austin, Texas, and Charlotte, North Carolina, in 2021; and Sacramento, California, and St. Louis in 2022.

Indianapolis would face stiff competition if the league were to continue expanding, as other locales vying for a spot include Detroit; Las Vegas; Phoenix; Raleigh, North Carolina; San Antonio; San Diego; and Tampa, Florida.

One industry source told IBJ that Indianapolis is widely viewed as a long shot, because of an already-crowded Midwest market that includes MLS teams in Chicago, and Cincinnati and Columbus in Ohio.

The source said the league isn’t sure Indianapolis has enough fans of top-tier soccer or enough businesses interested in higher-price tickets and suites. It is also concerned about whether the team would be able to score—and retain—bigger and better sponsorship deals if it moved up a rung.

While Stremlaw said the team still considers its MLS bid in play, the league’s commissioner, Don Garber, told The Athletic in December that Indianapolis is one of six cities from that bid cycle that does not have an active application to join the league.

A spokesperson for MLS did not return an IBJ call requesting comment.

Before the team can finalize how many stadium seats to build, it must decide where to put the stadium.

CIB Executive Director Andy Mallon said the city and the board have a vested interest in the stadium’s location, but that neither party has dictated location demands. The law authorizing the stadium funding requires that it be within Marion County.

Mallon said he could not share which locations are still under consideration.

“Our role has been as a facilitator of sorts, with respect to the stadium—what it looks like and how it operates,” he said. “We certainly have an interest in where it goes, but as far as the real estate and where development itself is going to be viable, that’s more of a question for” the team.

The former Valspar site just west of downtown was long thought to be the odds-on favorite—with Ozdemir himself previously saying it’s his top pick—but sources told IBJ the property is now likely out of contention.

The Indiana Finance Authority, which owns the site, does not plan to sell it. And even if the state were open to selling, the price might be prohibitively high for the Eleven, one source said.

Stephanie McFarland, a spokeswoman for the authority, said the group has “not been in discussion with anyone specific to this property” and that questions “related to any future sale of the property [are] speculative, and it’s inappropriate for us to hypothesize.”

The former Broad Ripple High School is also no longer believed to be under consideration. The Eleven, which once asked questions about the site, has had little contact with Indianapolis Public Schools. Also, the district is not ready to put the site on the market—and when it does, it will be sold through a competitive bid process.

Indy Eleven has also ruled out the former GM stamping plant property—a 91-acre site across West Washington Street from the Indianapolis Zoo. That site is now entangled in a bitter legal dispute between local owner Ambrose Property Group and the city.

Real estate experts said the team likely still views downtown as the logical option, given its proximity to other major sports venues, highways and entertainment.

Convention and sports leaders have previously touted the ability to program the venue outside of the team’s home games, bringing in concerts, other sporting events and conventions.

“There are all kinds of events out there for us to be thoughtful about,” Indiana Sports Corp. President Ryan Vaughn said last year. “This would create yet another amenity, another opportunity for us.”

A year ago, the franchise added eight minority partners—each an Indiana business leader with a slim financial stake in the team. And Indy Eleven is open to adding more as part of a push to raise money for its development and team operations.

Also in 2019, the team filed with the Securities and Exchange Commission its intent to raise $7.5 million in equity. Then, this month, it reported to the SEC that nine investors contributed a little more than $3 million in 2019, with each putting up at least $100,000.

The team did not say whether those investments came from existing shareholders or new investors.

Stremlaw said the SEC filing was required by law, but he declined to further share how the money will be used, noting the team does not publicly disclose its business plans.

Little is known about how much Ozdemir and the minority investors have put into the team since it began,. Butmoving forward, tens of millions of dollars will likely go toward the franchise’s operations, stadium efforts and any future MLS bid.

“Indy Eleven may have additional investment from our current investors and potentially new selective investors who are passionate about what we are doing as an organization, share our common goals for our city and community, and support our vision for Eleven Park,” the team said in an emailed statement.•