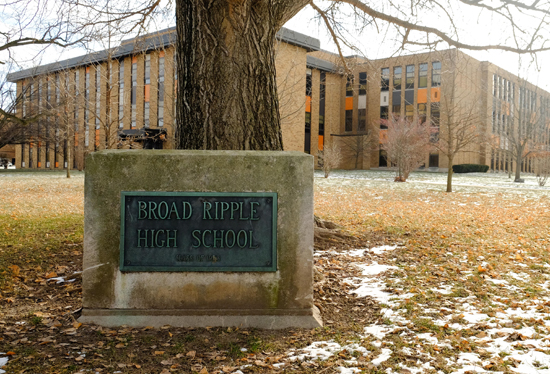 Seven schools will close or merge and 39 others will change the grades they serve in an extensive shake-up of Indianapolis Public Schools unveiled during the superintendent’s annual State of the District address on Tuesday night.

The plan, which still must be approved by the school board sometime in late fall, overhauls a district struggling to compete for students with its charter schools and neighboring township districts. The initiative changes the grade configuration of the vast majority of district-run schools. It does not affect most innovation schools within IPS, largely run by charter operators, which could opt to change their grades levels. The proposal also doesn’t directly affect independent charter schools.

“Twenty miles from here, there are communities that act on the knowledge that all their kids deserve unlimited futures — where all the schools have offerings rich enough to stir a child’s imagination,” Superintendent Aleesia Johnson said at her annual State of the District speech on Tuesday night. “It’s time for us to not just talk about it, but act like our kids, here in Indianapolis Public Schools, have infinite possibilities too. Because they do.”

Johnson  proposes reconfiguring K-6, K-8, and 7-8 schools into K-5 and 6-8 buildings. Another seven schools will close, three of which will merge with existing schools.

In addition, some other previously closed buildings, including Broad Ripple High School, will reopen to students once more.

“This is not a recommendation I make lightly. Every one of our schools is a neighborhood institution, with traditions and memories attached,” Johnson said. “I know this will cause disruption, and as your superintendent, I own that. None of this is easy. But it’s what it takes to align resources and values.”

By that, Johnson means that spending must better match expected revenue. While district coffers have been flush with federal pandemic relief funds for two years, those resources will expire and likely not be renewed. The district has estimated that it faces a structural deficit that could grow to $25 million annually by 2027.

The majority of district changes will occur in the 2024-25 school year.

The district estimates 328 staff members will be impacted by the change, meaning their roles will be changed through a school merger, closure or grade reconfiguration. The proposal does not recommend reducing staffing.

Here are the seven biggest changes outlined in Rebuilding Stronger, and how your school is affected:

Nearly every district-run school will reconfigure its grades in the 2024-25 school year.

Sixteen K-6 schools and 17 K-8 schools will convert to K-5s. The district’s four 7-8 middle schools will expand to serve grades 6-8. Two K-8 schools — William Penn Elementary and the Edison School of the Arts — will change from K-8 to 6-8.

The district will create feeder schools for those choice schools that are losing grades, such as Edison School of the Arts or Sidener Gifted Academy.

The reconfiguration is meant to address declining enrollment at many of the district’s K-8 and 7-8 schools. The drop in numbers has left some neighborhood schools with tight budgets, stretched to run an entire building while also serving all grades. That takes money away from programs.

“There are some of our schools in our neighborhood K-8 schools where there is no foreign language. Students do not have opportunities to take Algebra I, or they’re not even able to offer music or art,” Chief Academic Officer Warren Morgan told reporters at a briefing before the speech. “And so that’s a problem. We’re setting up inequities currently.”

Officials hope the change will allow all elementary and middle school students to have the same academic experience.

Every elementary and middle school student will be able to choose a school with one of several specialized programs: an inquiry-based program such as Montessori or Center for Inquiry, visual and performing arts, dual language, STEM, or “high ability” schools for academically gifted students.

Seven schools will close their buildings after the current school year. Three of those schools will merge with other schools.

“We have to make some really intentional decisions about how we maximize our resources to invest in that student experience,” Johnson told reporters at a briefing. “And how we think about facilities that are not in great shape.”

Under the proposal, Francis Bellamy PreK Center and the Step Ahead Program, George Buck School 94, and Floro Torrence School 83 would close at the end of this school year.

The schools face a variety of challenges, including declining enrollment and poor facility conditions.

Johnson said the district wants to make sure that the abandoned buildings remain assets in the community. She said she will continue to lobby the state legislature for flexibility in how it may use its empty buildings.

State law requires that districts offer their unused school buildings to charter schools at a purchase or leasing price of $1. IPS has pushed back against the law.

“We know that we are inserting disruption into the lives of families and asking them to make different choices that they have not asked to make,” Johnson told reporters. “And we know that it’s important that school buildings don’t sit empty and as a drag on a community but should be places of vibrancy.”

Joyce Kilmer School 69, a K-6 school that was run by charter operator Kindezi Academy before closing this school year, will also reopen in a new building serving grades K-5.

Sidener Gifted Academy, which is shifting from grades 2-8 to grades 1-5, will operate in a new building at the site of School 56 in the 2026-27 school year.

Grade reconfiguration will allow the district to double the number of seats in specialized high-demand, high-performing programs, such as International Baccalaureate, Montessori, Butler Lab, and Center for Inquiry.

“We know that for many of our programs, there are schools (where) we have more applicants than available seats. Sometimes we have four or six times the number of applicants (than) open seats in the Enroll Indy lottery,” Chief Portfolio Officer Jamie VanDeWalle told reporters in the briefing. “We have the opportunity to expand access to our high-demand programs geographically.”

As a result, the district proposes to designate some K-5 programs as feeder schools to specialized middle schools.

Harshman Middle School, currently a STEM and world language school, would also open a dual language academy and a high ability program within its building. The high-ability school would serve as a feeder school for elementary students coming from Sidener, while students at Global Prep moving up to middle school could continue at Harshman.

Three other schools would become Center for Inquiry schools, which are popular choice schools that offer the International Baccalaureate program: Carle Wilde School 79, George Julian School 57, and Washington Irving School 14, which will merge with the existing Center for Inquiry at School 2.

Special education programming will exist in every zone, and prekindergarten seats from the closing Francis Bellamy PreK Center will be redistributed across the district.

IPS will move away from its disjointed system of multiple overlapping enrollment zones for its various choice schools.

Instead, it will offer four larger enrollment zones across the district.

IPS proposes creating four larger enrollment zones throughout the district to increase choice offerings for students, rather than the disjointed set of enrollment zones it currently implements.

The change means that a student who moves within the same enrollment zone can still stay enrolled at the same school.

The move is meant to alleviate the high levels of transiency among the district’s neighborhood schools and achieve the stability seen at its choice schools — 96% of the students who attend a choice school in any given year are enrolled by the September count date, indicating a stable student population in which just 4% of students change schools during the year.

By contrast, 70% of students in neighborhood schools are enrolled by count day, leaving a turnover rate of 30% during the school year, according to the district.

“That is both more difficult for staff to deal with all of that change, and tough for the students because we know changing schools has a really detrimental impact on academic outcomes,” Patrick Herrel, director of enrollment and options, told the media at the briefing.

District officials drafted the zones based on more than three years of mobility data, a change that the district estimates will reduce student mobility by up to 76%.

The district will also offer an $8,000 signing bonus for highly specialized or high-need roles such as science, math, and special education teachers.

Sixteen schools will be getting facility upgrades or new buildings.

Some of these upgrades will accommodate new specialized programs opening in the school — Riley Elementary, for example, will undergo changes to prepare for opening an arts program.

Other upgrades will bring additions to schools to accommodate more students.

Two schools will get new buildings: the formerly closed School 69 and the new School 56, which will house the K-5 students at Sidener.