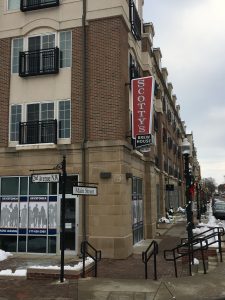 The last of Carmel’s new three-way liquor licenses will be used by an unidentified restaurant in a space formerly occupied by Scotty’s Brewhouse.

Scotty’s operated in the 6,500-square-foot space from 2014 until 2018 when it closed as part of the chain’s Chapter 11 bankruptcy filing. The spot was previously home to Detour American Bar & Grille.

Keystone Vice President Jennifer Pavlik said in a written statement that she was unable to disclose the name of the restaurant that would fill the space. She said  Keystone plans to let the future tenant announce its opening when it is ready to do so.

Mike Hollibaugh, Carmel’s director of community services, said the city had two applicants vying for Carmel’s last permit, but he declined to name the other Indianapolis-based restaurant whose application was not chosen.

“We could definitely use more permits,” he said. “Restaurants want to be here, and three-way permits are in demand, but they’re finite. The state quota system doesn’t serve a community that is growing rapidly.”

In March 2016, the state legislature passed a bill to give growing municipalities additional liquor licenses beyond those afforded to them under the existing census-based equation. Carmel was granted an additional four three-way licenses.

The Carmel City Council approved an application process a few months later to help it distribute the new beer, wine and liquor licenses.

That process required applicants to locate in one of the city’s four economic development areas: the City Center, Arts & Design, Midtown or Proscenium districts.

Anthony’s Chophouse and BurgerHaus in Carmel’s Arts & Design District received the first two licenses made available. The third was made available to Danny Boy Beer Works to locate in Midtown.

“We are lobbying again this coming year for more of these licenses,” Carmel spokesman Dan McFeely said. “We know the demand is going to increase, particularly in Midtown.”

For those cities who’ve grown and are looking for more permits, the 2020 census will provide updated figures to help guide the distribution of additional licenses.

“I think that we would certainly appreciate the Legislature looking at the quota system and finding ways to maybe loosen things up,” Hollibaugh said.

The state keeps the $40,000 fee associated with the licenses, Hollibaugh said, but Carmel indirectly benefits from the additional workers and taxes those new businesses create.

In its application letter, Keystone stated its intent to bring a casual dining or entertainment business to the space. The restaurant and bar is committed to being open to the public at least six days a week, for at least 30 hours a week, as stipulated by local ordinance.

Keystone also stated the business will have unique and high-quality offerings, and its operations will create about 20 new jobs.

While the three other entities to receive the new three-way licenses were restaurateurs, Keystone differs in that it manages the building.

“I think everyone felt comfortable enough with Keystone and the location to grant them the permit,” Hollibaugh said. “Keystone has a track record in Carmel of doing great work.”

Keystone stated in its application letter that the company’s investments on Main Street and in Carmel’s Arts and Design District alone total more than $100 million. Among those projects is Sophia Square, the development where the Scotty’s operated.

“It gives the mayor and the council a lot of confidence that (Keystone President) Ersal (Ozdemir) is going to bring a quality establishment,” Hollibaugh said.

Even though control over the restaurant belongs to Keystone and not the city, McFeely said it’s in the city’s interest to help Keystone fill the space.

“The mayor has every confidence that Keystone will do the right thing,” he said.