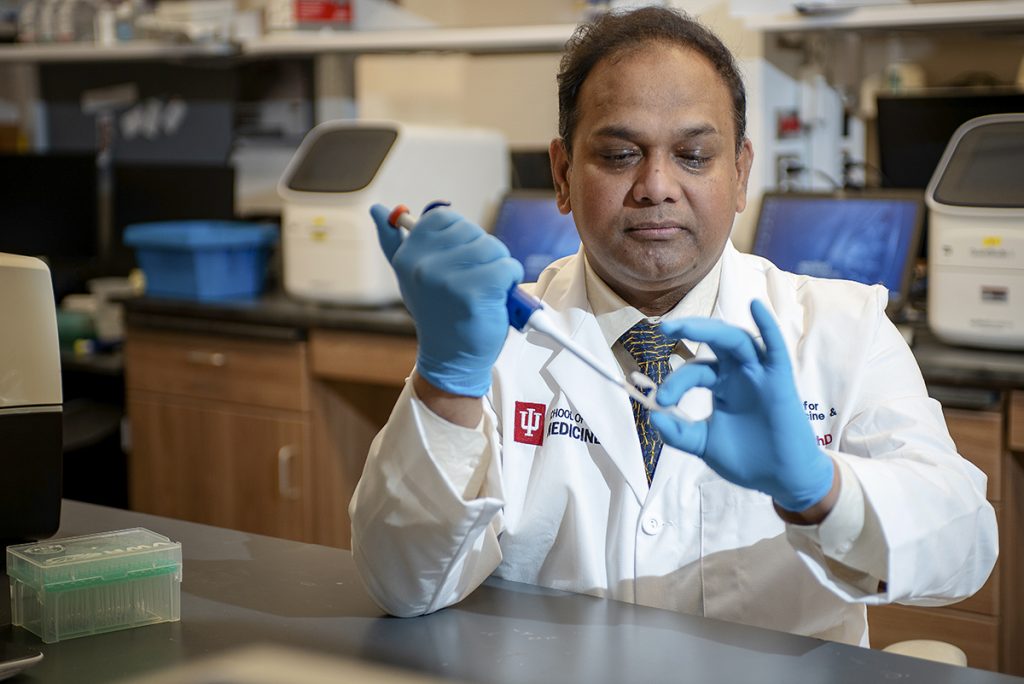 A dime-size nanochip developed by a world-renowned researcher who recently relocated to Indianapolis could help transform the practice of medicine. It could also turn Indianapolis into a manufacturing and research hub for radically new disease and trauma treatment techniques.

It all began in August 2018, when Chandan Sen, one of the world’s leading experts in the nascent field of regenerative medicine, moved his lab from Ohio State University to the Indiana University School of Medicine. He brought along a team of about 30 researchers and $10 million in research grants, and now serves, among a myriad of other positions, as director of the newly formed Indiana Center for Regenerative Medicine and Engineering, to which IU pledged $20 million over its first five years.

IU recruited Sen away from Ohio State in part because of its desire not just to promote academic research in his field but also to help develop practical, commercial products and uses for his breakthroughs.

“A scientist prefers to be in the lab and keep on making more discoveries,” said Sen, 53.

“But I thought that, unless we participate in the workforce development process and the commercialization process, I don’t think that the businesspeople would be ready to do it all by themselves. Because it’s such a nascent field.”

It’s definitely new—and its potential sounds like the stuff of science fiction.

Regenerative medicine, as its name hints, seeks to develop methods for replacing or reinvigorating damaged human organs, cells and tissues.

For instance, instead of giving a diabetic a lifetime’s worth of insulin injections, some of his skin cells could be altered to produce insulin, curing him. Such techniques might also be used for everything from creating lab-grown replacement organs to, someday, regenerating severed limbs.

“Regenerative medicine offers a form of medicine that is neither a pill nor a device,” Sen said.

“It is a completely new platform, where you don’t necessarily depend on any given drug, but are instead modifying bodily functions.”

Sen and his team’s signal contribution to the field is a technique they’ve dubbed tissue nanotransfection, or TNT. Put simply, it uses a nanotechnology-based chip infused with a special biological “cargo” that, when applied to the skin and given a brief electrical charge, can convert run-of-the-mill skin cells into other cell types. Potentially, the technique could be used for everything from regrowing blood vessels in burn-damaged tissue to creating insulin-secreting cells that could cure diabetics.

Obviously, such applications are still down the road a ways. But the technology is far enough along that some products are already making it to market—and investors, entrepreneurs and established companies are sniffing around for opportunities. According to the Alliance for Regenerative Medicine, more than 1,000 clinical trials worldwide are using regenerative medicine technologies.

“Thousands of patients are already benefiting from early commercial products, and we expect that number will grow exponentially over the next few years,” said Janet Lambert, the alliance’s CEO.

Lambert predicts that the number of approved gene therapies will double in the next one to two years. Last year, the U.S. Food and Drug Administration predicted it would be approving 10 to 20 cell and gene therapies each year by 2025.

These new techniques could do more than just revolutionize medicine. They could also upend the medical industry as we know it. And the IU School of Medicine—and Indianapolis—could lead the way.

“There are really only two or three places in the country that did the kind of comprehensive work that Dr. Sen’s group was doing,” said Anantha Shekhar, executive associate dean for research at IU School of Medicine. “And they were doing it from the lab all the way to the clinic, where they were already applying those technologies in patients.

“So it was very attractive to think of starting with a bang—bringing a comprehensive group here and creating a new center.”

Instead of merely treating chronic conditions, regenerative medicine could end them, once and for all.

For instance, consider a car with an oil leak. The “traditional” medical approach might be to live with the chronic condition by pouring in a fresh quart of oil every few days. The regenerative medicine approach would fix the leak. It’s good for the car, good for the car’s owner … but not necessarily good for the guy who was selling all those quarts of oil.

Which is why these new techniques, if they catch on, could cause turmoil in the medical industry.

“Because regenerative medicine has the potential to durably treat the underlying cause of disease, rather than merely ameliorating the symptoms, this technology has the potential of being extremely disruptive to the current practice of medicine,” Lambert said.

“This has the potential to be hugely disruptive,” Sen added, “because so much of medicine today relies on huge industrial infrastructures to manage, not cure, chronic diseases and disabilities.”

If such disruption comes to pass, the leaders of 16 Tech, a 50-acre innovation district northwest of downtown that aspires to house dozens of medical-related startups and established firms, would love to be its epicenter.

The Center for Regenerative Medicine will be one of the tenants of 16 Tech’s first building, a $30 million, 120,000-square-foot research and office building scheduled to open in June.

“Regenerative medicine is probably one of the next major waves of medical innovation in the world,” 16 Tech CEO Bob Coy said. “To have him here doing this work gives Indianapolis and Indiana an opportunity to develop an industrial cluster in regenerative medicine.”

Coy believes the most momentous early step on that road was the recent establishment by Sen of master’s and doctoral programs in regenerative medicine at the IU School of Medicine. It’s the first degree of its type in the country, earning IU and Indianapolis the enviable status of first mover.

What isn’t in place yet is a state or city program to promote development of a regenerative medicine hub.

“We need to start doing that,” Coy said. “That means putting a lot of the infrastructure in place to support startups that are based on this technology, as well as recruiting companies that want to collaborate with Dr. Sen.”

In spite of the lack of a coherent recruitment program, Coy’s phone has started to ring, thanks largely to Sen’s presence.

“There have been a few meetings I’ve had with people who already have relationships with him, who, when they come to town, have reached out to meet and talk about what we’re doing at 16 Tech,” he said.

One of the first 16 Tech startups with designs on the regenerative medicine niche is Sexton Biotechnologies.

The company was groomed by Cook Regentec, a division of Bloomington-based Cook Group charged with incubating and accelerating technologies for regenerative medicine and the related field of cell gene therapy.

Any products that show promise are either folded into the company, turned into their own divisions or, as in Sexton’s case, spun off as an independent entity with Cook retaining a financial stake.

It’s a measure of the newness of this field that Sexton’s 17 employees aren’t working on new medicines, but rather marketing basic tools needed to conduct research. The company’s offerings include a vial for storing cell and gene products in liquid nitrogen, and a cell culture growth medium.

There’s a ready market for such tailor-made gear, because, for years, researchers in the regenerative medicine field had to make do with jury-rigged equipment.

“What most of those companies did was repurpose things like tools from the blood banking industry, or tools from bio pharma,” said Sean Werner, Sexton’s president.

“So that’s why a lot of newer companies are starting to build tools explicitly for the industry, as opposed to everybody just having to cobble together stuff that was already out there.”

Werner said investors recognize the momentous opportunity in regenerative medicine and are flocking to the field.

“It’s not something you have to explain,” he said. “Companies and VC groups are trying to get a piece of it.”

What has investors and medical researchers charged up is the almost unlimited range of potential applications, from healing burns to, perhaps someday, regenerating limbs.

“I think it would be a huge revolution if we’re able to, for example, regenerate insulin-secreting cells in children who have become juvenile diabetics or have for whatever reason lost their pancreas,” Shekhar said. “Those are the kinds of things that will start to change the way we see certain diseases.”

Lambert predicted that, as the science advances, so will the business case.

“I expect this trend to continue in the coming years, greatly increasing the number of patients poised to benefit from these therapies.”

Werner said regenerative medicine also is seeking advancements in manufacturing technologies that will lower the cost of product development.

It all adds up to a huge opportunity the state is well-positioned to seize, Werner believes.

“Indiana is a perfect place for this kind of thing to really ramp up,” he said. “There’s no reason we can’t lead the field.”•