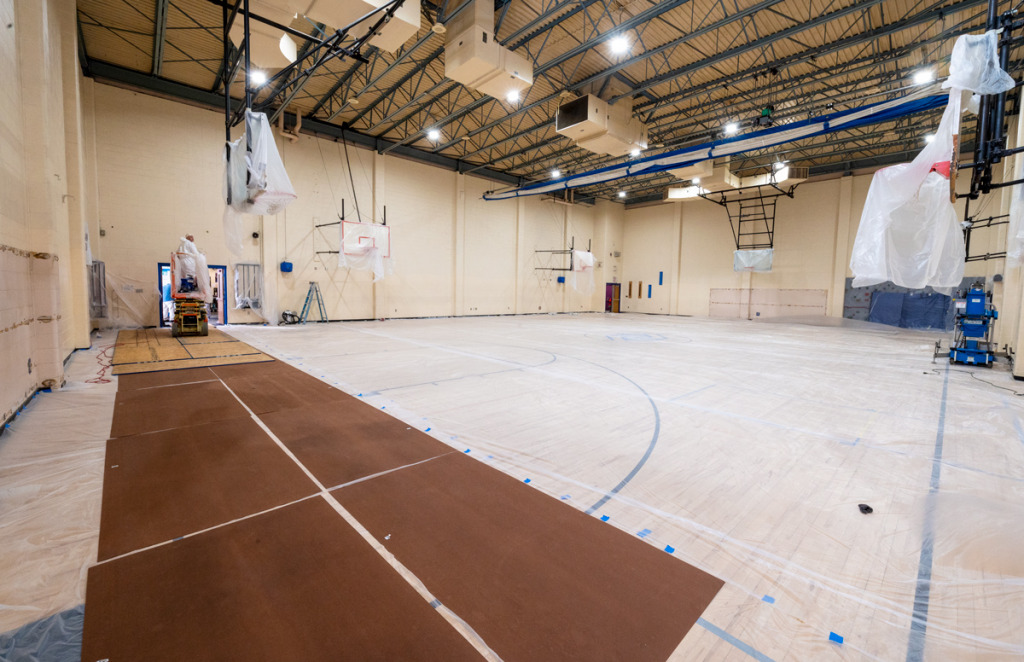 The Boys & Girls Clubs LeGore Unit at West Minnesota Street and Lynhurst Drive is getting a refurbished basketball court, at left, and library. (Photo courtesy of Indiana Sports Corp.)

An annual community-engagement project by the NCAA and its partners has resulted in a face-lift for a local Boys and Girls Club.

Each year, in conjunction with the NCAA Tournament, the association partners with local organizations to complete its NCAA Legacy Restoration Project, which aims to leave a lasting legacy on the city that hosts the Final Four.

Typically, the NCAA and its partners invest time and money in upgrading youth and community centers.

This year, The Boys and Girls Clubs of Indianapolis is the recipient, with the LeGore Unit at West Minnesota Street and Lynhurst Drive receiving a slate of upgrades.

As part of the project, the club’s basketball court is being refurbished and the library is getting new carpet and furniture. The far-west-side club will also receive new basketballs and backpacks full of school supplies and Degree deodorant and antiperspirant products.

Unilever, which owns Degree and is a corporate sponsor of the NCAA, invested more than $100,000 in the project and was the primary sponsor.

Jen Pittman, vice president of enterprise communications and community affairs at OneAmerica, helped lead the committee tasked with working with the NCAA and the Indiana Sports Corp. to select a site for the Legacy Restoration Project. That committee visited sites throughout the Indianapolis area. The LeGore Unit stood out.

“We could just sense that basketball is at the heart of this center,” Pittman said. “LeGore is a unifying place, on and off the court, and basketball is very much a part of their program. But they also extend beyond basketball and we saw that the staff and volunteers are fully invested in the kids and the neighborhood.”

The complex where LeGore members play basketball has been used by the club since 1991 and sorely needed renovations.

The work is nearing completion and will be revealed on March 25.

“We really appreciate the renovations and we’re happy to be considered for it,” said LeGore Program Director Zach Sigmund. “Our community deserves it and I feel like this facility needed it. I’m looking forward to sharing it with all the kids that want to come in and play.”

Other sports and activities will also benefit from the new equipment, including the club’s Triple Play Program, a wellness program for youth.

But the club’s basketball leagues might be the biggest beneficiaries.

Before the pandemic, the club saw 250 to 300 participants in its leagues each year, Sigmund said. When the leagues return, the players will be in for quite a surprise.

“When the kids come into the gym now, they’re going to have a nice and new basketball court to play on,” he said. “We’ve got a lot of kids in this community that absolutely love playing basketball here. Our basketball leagues bring in lots of people from the community.”

In addition to new NCAA-licensed basketballs, the court also will get new rims and backboards. The project also includes a painted mural.

“Everything is done with very good quality,” Sigmund said. “They brought in nice stuff for us and I definitely see it lasting a long time.”

The renovations to both the basketball court and library are being done by Indianapolis-area contractors, as the NCAA was committed to keeping the project local.

Pittman said a goal of the NCAA Legacy Restoration Project is to incorporate more than just athletics.

“Most of the legacy projects are well-rounded and include lots of different elements,” she said. “Those extra touches of the library, school supplies and basketballs show how carefully the NCAA considers these legacy projects.”

For more on how the NCAA is investing in the Indianapolis community during the tournament, visit finalfourindy.com/community-engagement.•