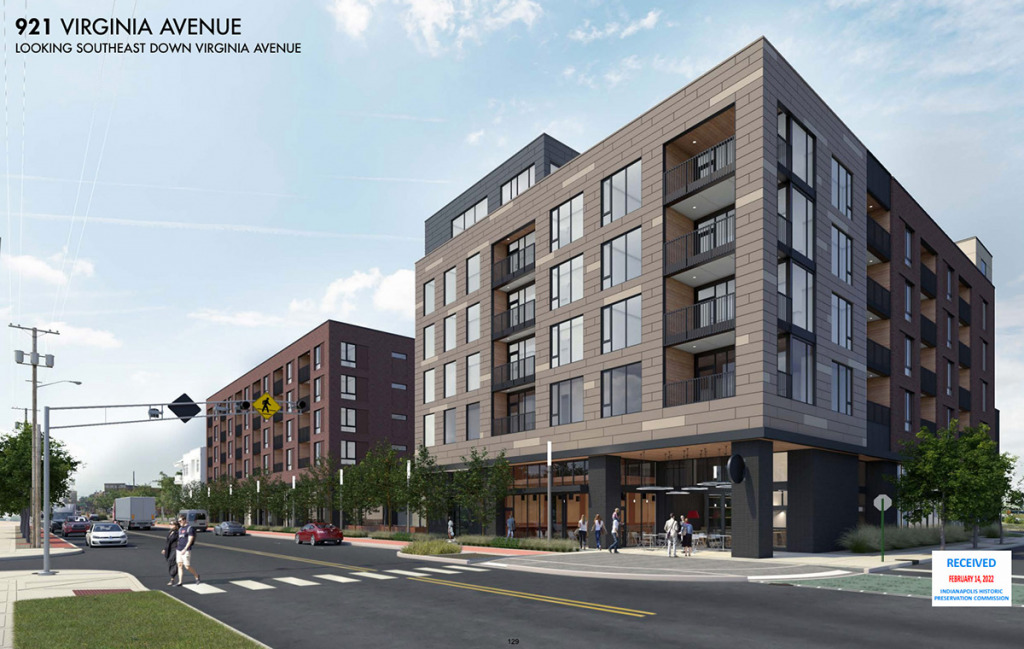 The retail spaces for the 921 Virginia project would be inset to provide more room at street-level for pedestrians and outdoor dining. (Rendering courtesy of the city of Indianapolis)

The site of a one-story, nondescript corporate campus in Fountain Square used sparingly for local White Castle operations is being eyed for a $60 million apartment and retail project by a pair of local development firms.

Gershman Partners and Deylen Realty plan to build a 195-unit apartment structure with first-floor retail at 921 Virginia Ave.—a 1.5 acre lot that is currently occupied by a 22,000-square-foot complex that once bustled as a local home for Columbus, Ohio-based White Castle’s corporate employees, but is generally no longer used.

The project would be bounded by Leonard Street to the north and west, Buchanan Street to the south and Virginia Avenue and the Cultural Trail to the East.

The yet-unnamed development would be about five stories in height and feature a mix of market-rate studios and one- and two-bedroom apartment units. It would also have six retail storefronts, a lobby and a courtyard space, along with a dual-grade, 210-space parking garage with access from Leonard Street.

Deylen and Gershman have a track record together in Indianapolis. In 2020, they completed the $45 million Ardmore on Ohio Street downtown, which is now up on the market for an undisclosed asking price. Deylen has also developed multiple apartment projects in Fountain Square in recent years,

The Virginia Avenue project went before the Indianapolis Historic Preservation Commission for a preliminary review earlier this month. A portion of the parcel is located in the Fountain Square Historic District, so the IHPC must review whether the project is appropriate for its environs.

Owned by White Castle System Inc., the property is under contract by the developers. Its purchase is pending city approvals for the project, which would include demolishing the current building and rezoning the parcel.

Some members of the commission expressed concern over the project’s multiple color tones, and mismatched masonry throughout the design.

The development consists of a single building, but the Virginia Avenue frontage gives an impression of multiple structures due to the project’s use of multiple colors and a cutout for the entryway. It also has planned to inset the retail spaces on the first floor of the building to provide more space for outdoor dining and mobility in front of the property.

Blackline Studio, itself located in Fountain Square, is the design firm on the project.

Commission members also said the building might be somewhat out of place with the other properties in the Fountain Square neighborhood because of its height. Commission president Bill Browne of Ratio Architecture suggested the project might benefit from a change in scale as it goes deeper into the district.

“I feel like there just needs to be a bit more detailing or character to the massing of the buildings,” he said. “They’re a little bit overbearing as you start down Virginia Avenue to the southeast. So I certainly would just explore that a little bit. I think what is very successful is the first floor and the treatment [along] the Cultural Trail.”

Eric Gershman, principal of Gershman Partners, said the development team expects to return to the IHPC for approval—after making some modifications—in May. The project is expected to break ground by the end of the year, with a 20- to 22-month construction window.