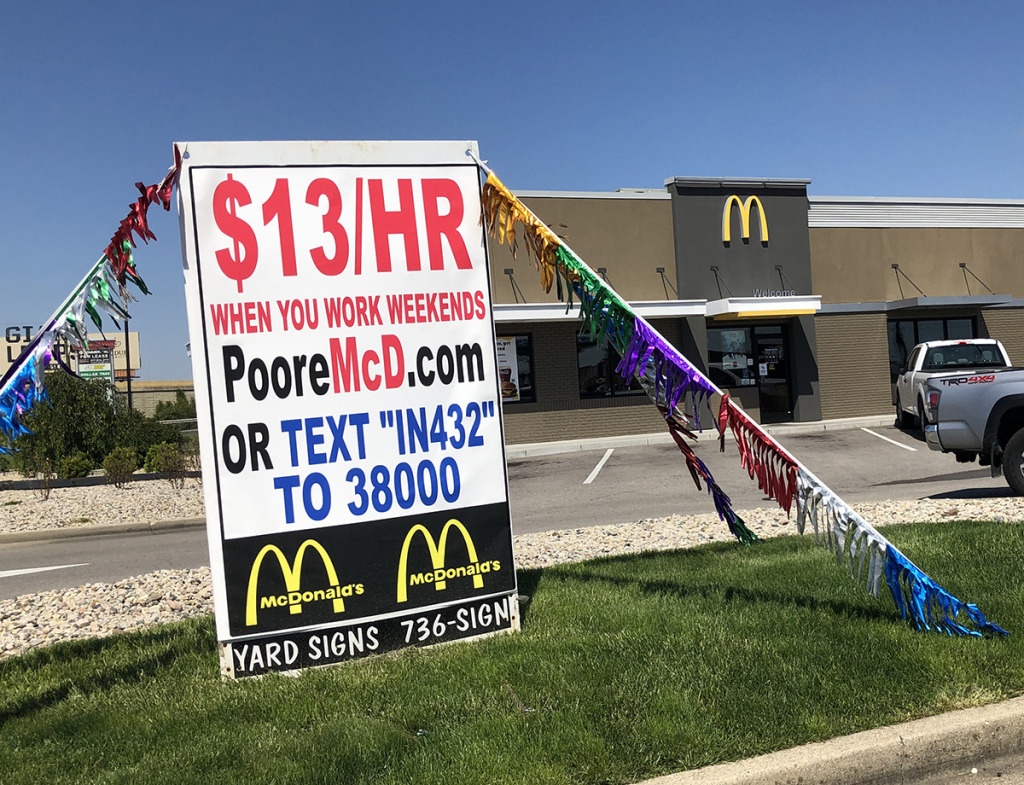 McDonald's is asking its franchisees to follow its lead. A franchised restaurant in the Indianapolis-based Poore Organization recently advertised for a $13 hourly wage on weekends. (IBJ photo/John Russell)

McDonald’s is raising pay at 650 company-owned stores in the U.S. as part of its push to hire thousands of new workers in a tight labor market.

The fast-food giant is also encouraging its franchisees — which make up 95% of its restaurant base — to boost pay.

McDonald’s is the latest restaurant chain to announce pay raises.

Chipotle said Monday it will raise workers’ pay to an average of $15 per hour by the end of June. Darden Restaurants, the owner of Olive Garden and other chains, said it March that it will guarantee workers $12 per hour including tips by 2023.

Wages and benefits for U.S. workers have been rising quickly as vaccinations increase and employers try to meet growing demand at restaurants and other businesses. U.S. workers’ total compensation rose 0.9% in the first three months of this year, the largest gain in more than 13 years, according to the Labor Department.

McDonald’s said it didn’t have data on wages at franchised restaurants. But the company is asking franchisees to follow its lead.

“We encourage all our owner/operators to make this same commitment to their restaurant teams in ways that make the most sense for their community, their people and their long-term growth,” McDonald’s U.S. President Joe Erlinger wrote in a letter to employees.

In a statement, the U.S. National Franchisee Leadership Alliance __ which negotiates with the company on behalf of franchisees __ expressed support for the wage hikes and encouraged restaurants to stay competitive in their local markets.