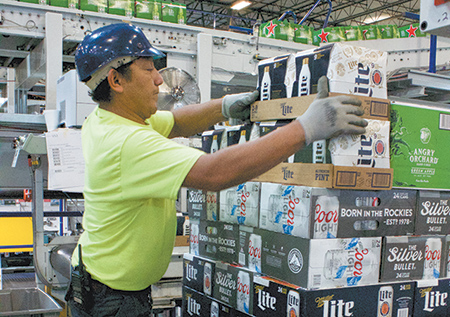 The transaction is scheduled to close Dec. 11. Terms of the agreement were not disclosed.

Reyes is one of the largest private companies in the country and is the largest beer distributor. Throughout 2020, it has grown significantly through acquisition.

“We are thrilled to have the opportunity to add a new state to our footprint,” Tom Day, CEO of Reyes Beer Division, said in written comments. “Indiana is home to great brands, retailers and consumers. We are looking forward to learning the market and bringing our strengths and scale to our new customers.”

Monarch has been family-owned and locally operated since 1947. It was founded by Edwin T. French Sr. and has operated under three generations of French family ownership, expanding into Indiana’s largest beer distributor. In 2009, the company moved into what it described as a “state-of-the-art” 500,000-square-foot distribution center on Pendleton Pike in Lawrence.

It delivers an average of 50,000 cases of product a day to retail customers throughout the state.

“This acquisition represents the coming together of two great long-standing family-owned businesses. Reyes Beer Division is a proven industry leader, and we are confident that they will be a great distributor for the state of Indiana and lead the business to further success,” Monarch CEO Phil Terry said in written comments.

He did not immediately return a call from IBJ seeking further comment.

Over the past couple of years, Monarch has had its share of ups and downs.

In 2017, it brought Yuengling to Hoosiers, a win for the company. But it failed to convince state lawmakers to allow the beer and wine distributor to also distribute liquor, which led to a major supplier, E. & J. Gallo Winery in California, ending its relationship with Monarch. Monarch ended up closing its wine division in 2018.

For years, the company had challenged Indiana’s so-called prohibited interest law, which prohibits a beer wholesaler from acquiring an interest in a liquor-wholesaling permit and vice versa.

A change to the law would have allowed Monarch to enter the liquor wholesaling business, but it lost that fight in the administrative, legislative and judicial arenas.

Monarch has landed on IBJ’s largest private companies list for years. In 2017, the last year it submitted information to IBJ, it reported total revenue for 2016 at $341 million. At the time, the company had 705 employees, but it laid off 100 employees in 2018 when it closed its wine division.

11 thoughts on “Monarch Beverage Co. to be acquired by Illinois beer distributor”