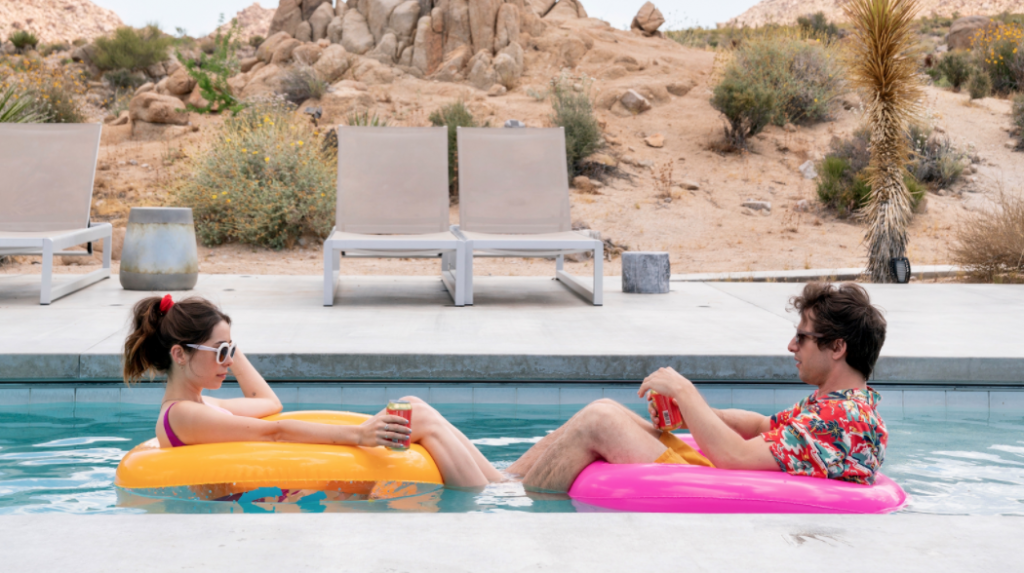 Well, it’s Groundhog Day at the movies—again. But instead of the icy winter of Punxsutawney, Pennsylvania, the time-loop romantic comedy has been transported across the country to the desert resort city of Palm Springs where Andy Samberg is permanently stuck as a plus one at a wedding.

“Today, tomorrow, it’s all the same,” Samberg’s Nyles deadpans to a smiley groomsman while floating on an inflatable pepperoni pizza slice in a perfectly pleasant pool on a perfectly pleasant afternoon. Not even the beer in his hand seems to help. Time loops can wear on a person, even in Palm Springs.

While “Palm Springs,” directed by Max Barbakow using the script written by Andy Siara, certainly owes a debt to Harold Ramis and Danny Rubin, this breezy, irreverent, oddly violent and charming entry into this increasingly robust genre stands solidly on its own.

Nyles is already deep into his life in permanent loop when we meet him delivering a showstopper of a wedding speech to bail out the maid of honor (and sister of the bride), Sarah (Cristin Milioti), who in her mission to get as drunk as possible on the free red wine forgot that she might be called on to speak. Nyles’ grand gesture works and gets him an audience with Sarah for the night, until things go very sideways and she accidentally ends up in the time loop as well.

Sarah, naturally, is less than thrilled with this development, and Nyles watches helplessly as she repeats many of his own early attempts to break the loop (driving out of state, dying, drugs, etc). He has long since resigned himself to his life in the sun, waking up every day to his terrible girlfriend (a very funny Meredith Hagner) and trying to find ways to occupy himself.

The addition of Sarah shakes things up and together they kill time with elaborate plots, synchronized dancing, costumes, mayhem and a few deep conversations. But she has her own secrets and demons and is determined to find a way out even if Nyles isn’t.

If it sounds a little like quarantine, it is. But it’s also a lot better than quarantine: Nyles and Sarah don’t have to worry about money or rent or jobs. They just have to be wedding guests, or defectors, for eternity.

Both Sarah and Nyles continue in the millennial romantic comedy tradition of the noble dirtbag leads: They are as educated as they are unmotivated and already so behind in life milestones that they’ve decided to skip to the end and just give up.

Samberg is predictably charming and funny here. But it’s Milioti, who may be best known at this point as “The Mother” from “How I Met Your Mother” or “that girl who was in that one ‘Black Mirror’ episode,” who is the big revelation, finally getting the spotlight which has been a long time coming.

The supporting cast is packed with fun characters and actors including Peter Gallagher as the father of the bride, June Squibb as the Nana and J.K Simmons as a sadistic wedding guest named Roy. And although they all get their moments, it’s hard to forgive “Palm Springs” for teasing a mini “Guys and Dolls” reunion with Gallagher and Simmons and then giving them zero songs or even scenes together.

It’s no wonder “Palm Springs” made such a splash at the Sundance Film Festival in January. It looks like a studio film, it’s fun and reminds you of the sun and warmth. Thankfully, it’s just as effective off the mountain.

“Palm Springs,” a Hulu release, has not been rated by the Motion Picture Association of America but contains some blood, drugs and sexual situations. Running time: 87 minutes. Three and a half stars out of four.