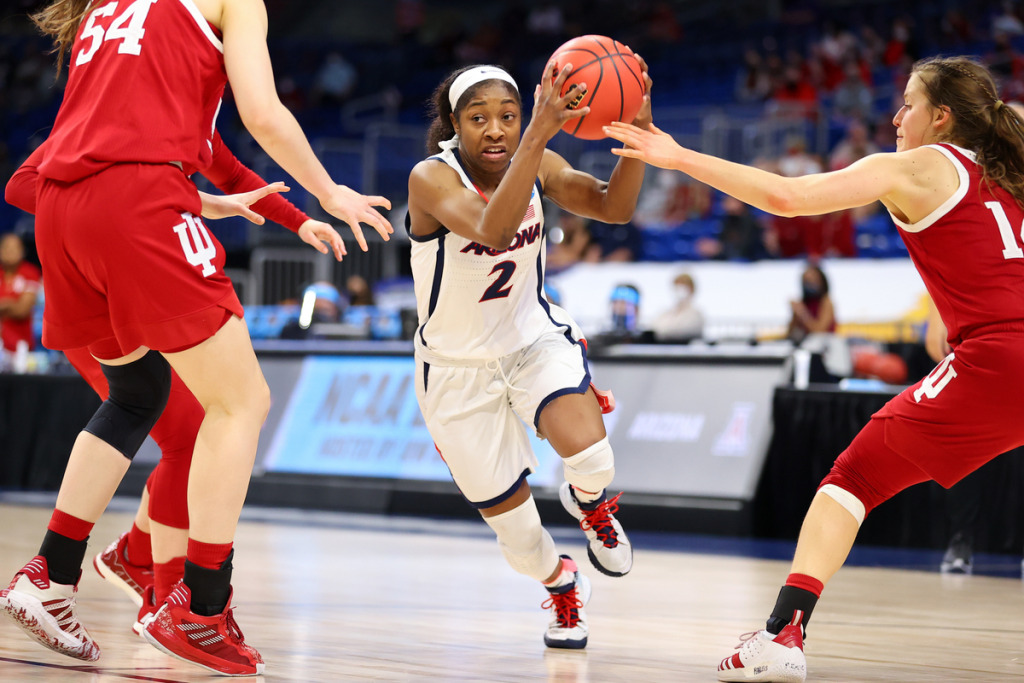 Arizona takes on Indiana in the Elite Eight round of the NCAA Women’s Basketball Tournament at Alamodome on March 29, 2021 in San Antonio, Texas. (Photo by Justin Tafoya/NCAA Photos via Getty Images)

The NCAA has for years treated women’s basketball as inferior to men’s, a stinging external review found, dramatically undervaluing and undermining the women’s game in ways that go far beyond the substandard weight rooms exposed at its championships in March.

The report, released Tuesday by the law firm Kaplan Hecker & Fink LLP, recommends serious reforms to the NCAA’s basketball programs, including a combined Final Four tournament for men and women and changes in the organization’s leadership structure, media contracts and revenue payments.

The review, commissioned by the NCAA in the wake of an uproar over inferior facilities at the women’s basketball championships, offers a detailed accounting of the ways systemic inequities can disadvantage women athletes and constrain the growth of women’s sports. And it comes amid a broader movement to reform college sports that has put the NCAA on its heels. The organization lost a major Supreme Court case over athlete compensation in June, and it was forced last month to reverse course on rules that long forbid college athletes from profiting off their celebrity.

The NCAA has also come under congressional scrutiny, including by the House Oversight Committee, which has separately probed gender disparities across college sports. “The report’s findings will come as no surprise to the thousands of student-athletes and coaches who have experienced NCAA’s gender-based discrimination,” committee leaders said in a statement Tuesday.

In a statement Tuesday, the NCAA Board of Governors said it was “wholly committed to an equitable experience among its championships. We know that has not always been the case and the instance of the Division I Women’s Basketball Championship is an important impetus for us to improve our championship experience so it is not repeated.”

“We have directed the NCAA president to act urgently to address any organizational issues,” the Board said.

A second report examining the rest of the NCAA’s championships is expected later this year, after the controversy at the basketball tournaments sparked an outcry from leaders in other women’s college sports. Women’s volleyball players decried conditions at their championship this spring, and softball leaders made similar complaints to The Washington Post, with one coach calling the women’s championship “lower than an afterthought” in the eyes of the NCAA.

The NCAA frequently prioritized its men’s basketball tournament at the expense of the women’s game, the report found. In recent years, NCAA officials repeatedly refused to allow women’s tournament organizers to use the lucrative “March Madness” branding in any of their promotional materials—even denying their request to print masks with the phrase “Mask Madness” for the tournament this year.

The NCAA cited its media deal for the men’s tournament, made with CBS and Turner, for the limitations on the women’ use of the “March Madness” branding. But the report called that claim into question.

“No one at the NCAA was able to identify any instance in which CBS/Turner itself suggested that the women’s tournament could not use March Madness—or even an instance in which the NCAA asked the broadcaster for its position on the issue,” the report said. Spokespeople for CBS and Turner said Tuesday that nothing in their agreement with the NCAA prevented them from using that branding.

The report also raised questions about the NCAA’s claims about the men’s tournament’s vast revenue generation, which the organization has used as justification for the substantial differences between the men’s and women’s tournaments. In the midst of the controversy this spring, the NCAA sent a fact sheet to media organizations that claimed women’s basketball loses substantial amounts of money.

Bu the law firm’s review found those calculations, while broadly accurate, were “skewed” by the NCAA, which incorrectly allocated revenue only to men’s basketball.

The majority of the NCAA’s revenue comes from media rights deals, the most of lucrative of which is its agreement with Turner and CBS to broadcast the men’s tournament. It extended that deal in 2016 for eight years and $8.8 billion.

The report offers a scathing and detailed play-by-play of how the NCAA failed women’s basketball players this March. It chronicles inequalities in virtually every aspect of the tournaments, well beyond the single rack of dumbbells provided in place of the elaborate weight room given to the men.

The NCAA sought out corporate food sponsorships to feed Pizza Hut and Buffalo Wild Wings to players at the men’s tournament, the report said—but not for the women, who were offered only prepackaged hotel meals. It spent $2.4 million on signage for its men’s tournament and only $783,000 on the women—a disparity that came even after the organization was criticized for the clear difference between the appearance of the tournaments.

The NCAA’s disparate treatment of men and women basketball players trickled down to affect how colleges themselves treated their women’s programs, the report found. Though the NCAA is tasked with educating colleges about Title IX, the report found the NCAA’s use of financial incentives in men’s basketball ran contrary to the spirit of the landmark gender equity law.

A “Basketball Performance Fund” distributes money to conferences based on how well their men’s basketball teams perform—some $168 million in 2021, a result of the fact that men’s basketball tournament is by far the most significant revenue generator for the NCAA.

But there is no financial reward whatsoever for high-performing women’s programs, a fact the report called “inconsistent with Title IX.” The NCAA’s fund incentivizes schools to focus on men’s basketball over women’s, the report found, and makes no financial effort to reward gender equity.