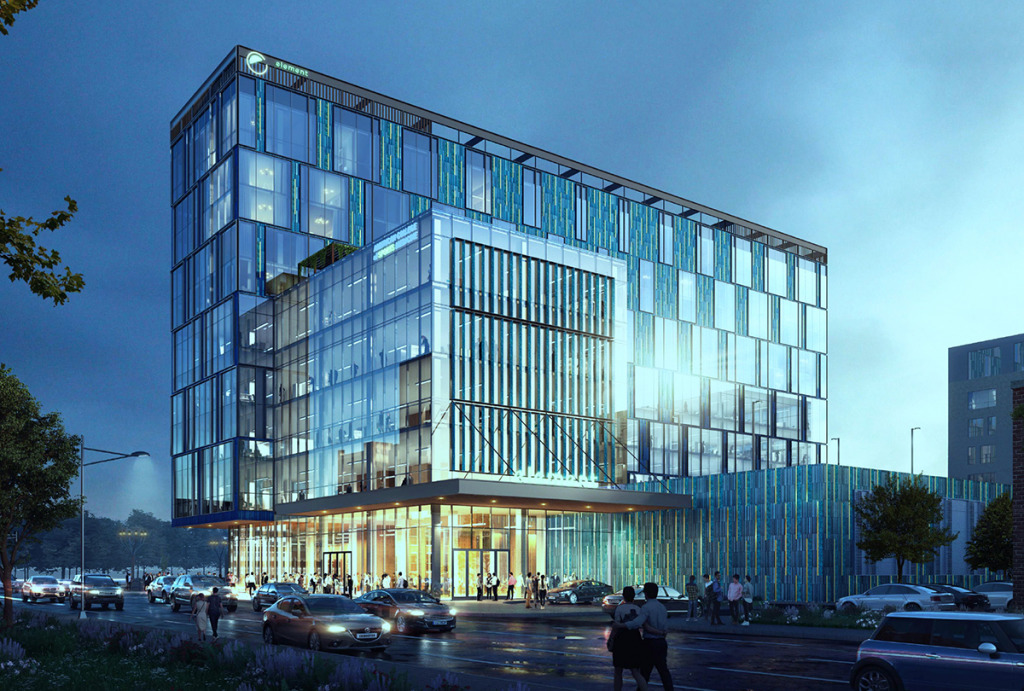 The complex at 401 W. Michigan St. would include a 125-room hotel and 75,000 square feet of office space. (Rendering courtesy of Ratio)

A local developer is teaming up with a medical education institution to create a striking, 11-story hotel-and-office center along the Canal Walk in downtown Indianapolis.

Schahet Hotels LLC plans to build the property to replace the American College of Sports Medicine facility at 401 W. Michigan St. The building would feature 75,000 square feet of office space—a portion of that occupied by the college—along with a 125-room hotel and a 240-space parking garage.

While the cost of the project has not yet been finalized due to increased construction costs, Schahet legal representative J. Murray Clark told IBJ the investment “will be significant.”

The development will allow Indianapolis to retain the headquarters for the college, which has been here since 1983. The existing building on the site, a 30,000-square-foot structure, will be demolished to make way for the new building.

The new L-shaped building would be comprised largely of clear and light-colored glass, with a 11-story primary leg and a shorter portion shooting off at a right angle on one end.. It’s expected to have office space on the second through fifth floors, with hotel rooms concentrated in the taller portion on levels six through 11. The parking garage would be in a shorter, three-story section, with parking on four floors including beneath the surface.

“This will reshape the city’s skyline in this area of downtown, provide a timeless benchmark in the local neighborhood and community and activate this segment of the canal,” Clark said, adding the development team is “very bullish” on moving the project forward.

The college is generally considered an authority in the fields of sports medicine and exercise science, with 50,000 members and certified professionals worldwide.

Clark said plans haven’t been finalized for how much space will be occupied by the college in the new building, but the owners also intend to market the building to other businesses in the medical and sports fields.

“Our hope is there will be … a cluster of industry-related groups, whether it’s sports, training or even healthcare related,” he said.

The hotel portion of the building will bear the Element flag, a sub-brand of Marriott’s Westin line. The hotel will offer both short- and long-term stay options and will be marketed to business professionals and those visiting IUPUI.

Murray said the hotel won’t impede the view of the canal for the dual-branded Hampton Inn and Homewood Suites property set to open later this year at 414 W. Vermont St.—a property that utilizes the former Bethel AME church as part of its configuration.

The project will also include some public green space on the south portion of the property. The area, which the college has long called the Fitness Garden, will be converted to a public amenity through a collaboration with the city of Indianapolis, although plans haven’t yet been finalized.

The Schahet project has been brewing for a while, Murray said.

“They’ve been working on this for several years, and I think the pandemic put things on hold,” he said. “I would submit that, but for the pandemic, they would have already probably moved forward.”

A specific timeline for the redevelopment of the property has not yet been finalized. However, the development was recommended for city approval by the Regional Center Hearing Examiner on Sept. 9, and will be taken up by the Metropolitan Development Commission on Oct. 6.

The project requires city approval because it is located in what the Department of Metropolitan Development classifies as the regional center—an area that comprises a large portion of Mile Square and other areas of downtown.

A representative for the American College of Sports Medicine couldn’t be immediately reached for comment.

Indianapolis-based Ratio is the design firm on the project.