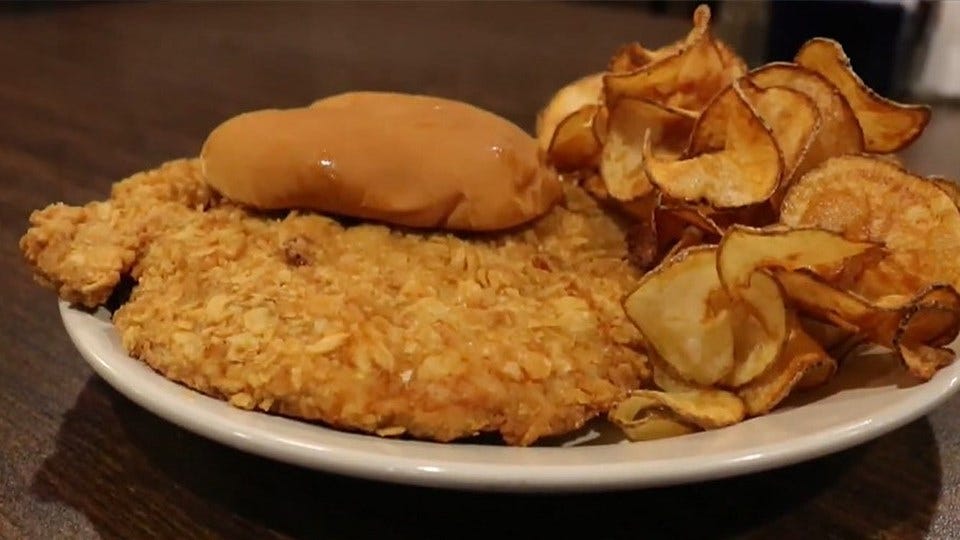 A shot of the pork tenderloin sandwich at the Tin Plate in Elwood. (Inside INdiana Business Photo)

After unveiling his 2023 Next Level Agenda on Wednesday, Gov. Eric Holcomb said a bill will be introduced in this year’s legislative session to designate the breaded pork tenderloin as Indiana’s official state sandwich.

“We’re going to settle the question once and for all about what is the official state sandwich of Indiana,” Holcomb said. “I will not let that get away from us.”

Jeanette Merritt with the Indiana Pork Producers Association told Inside INdiana Business on Friday the designation will benefit not only Indiana’s pork producers, but the numerous restaurants throughout the state who offer breaded tenderloins.

“We know from many, many food trails from websites from social media followings that that breaded pork tenderloin has a giant following in Indiana,” said Merritt. “So people already love it, but the opportunity for the governor to highlight it even more, I think, just is such a great opportunity for pork producers to be able to share it with the people that they’re around and encourage people to eat even more of it.”

Indiana is the fifth-largest pork producing state in the U.S. with nearly 3,000 pig farmers raising over 4 million hogs. Merritt said those farms are vital to their communities, especially in rural Indiana.

“Many of them are working with our neighbors to provide jobs in the in those communities. Our pig farms provide almost 15,000 jobs across the state,” she said. “So those those barns [are] not only run by a pig farmer, but they they have employees as well that are vital to those operations and to keep them running. It’s an important part of our industry that we touch a lot of industries as well. We have major packing facilities in Indiana. We have feed companies. We have so many people that are tied to the pork industry that it is something that, economically, is incredibly important to Indiana.”

Merritt said if the tenderloin receives the official designation, she hopes it will also be a boon for chefs throughout Indiana.

“We value relationships with chefs, and we value that they put pork on their menus, and that it’s important to their restaurants and their guests that are coming in,” she said. “So we hope that it even spotlights an item on their menu even more, and they’ll have more more guests coming through and more opportunity to sell a great sandwich.”

Pork producers nationwide have been dealing with rising feed and transportation costs, but Merritt said Hoosier producers had a “pretty okay year” in 2022.

“Feed costs were up, but for many of our pig farmers, a lot of them are also raising their own feed. So they’re growing the corn, they’re growing the soybeans that go into their feed for that pig they are raising,” she said. “For those that aren’t, that have to purchase feed, that is a higher input cost for them.”

However, she said 2022 was a much better year than the previous few years, which was impacted heavily by the COVID-19 pandemic.

U.S. pork production is expected to see a moderate rebound this year, according to a report from the CoBank Knowledge Exchange, a research and knowledge-sharing program that covers agriculture, rural infrastructure and other industries.

The report shows the domestic pork supply has benefitted from a 13% reduction in exports and 32% rise in imports for the 12 months ended in September, saying, “Global economic headwinds and an elevated dollar suggest this trend will continue.”

Looking forward, Merritt said, it’s hard to gauge how fuel costs will impact pork producers in 2023, but projections call for a successful year.

“We hope to have a really great production year in corn and soybeans and so you know that we have an abundant supply of feed opportunities for those livestock. So the predictions are that 2023 will be a profitable year for pork farmers, and we hope it is.”