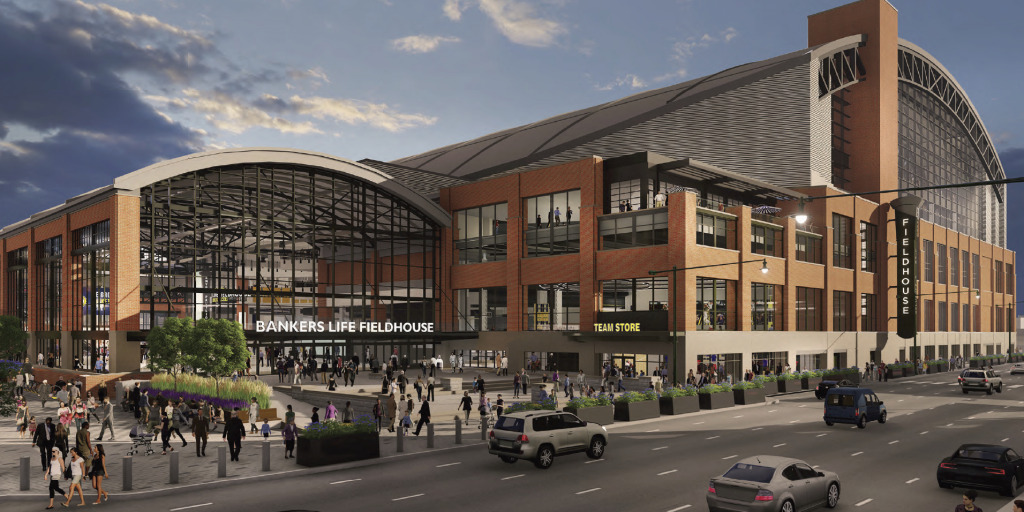 The Pacers and the Capital Improvement Board have modified plans for the facade of Bankers Life Fieldhouse—largely scrapping plans for major changes. (Courtesy City of Indianapolis)

Plans for a grand, glass-wrapped entry pavilion as part of the $360 million renovation to Bankers Life Fieldhouse have been tabled, in favor of minimal updates that largely keep the existing facade intact.

New designs have been filed with the Indianapolis Historic Preservation Commission, showing the renovation will mean little change to the exterior look of the building—with the exception of some additional landscaping and a new outdoor terrace above the team store, near Georgia Street.

The renovations will also remove the large box office area on the northern wall inside the entry pavilion and create a smaller entrance, as the facility moves exclusively to mobile ticketing. Additionally, the walkway between the Virginia Avenue garage and the fieldhouse could also be widened near the venue entrance for improved traffic-flow.

The changes were submitted late last month by the Capital Improvement Board, which owns the facility and is paying for the bulk of the renovations, along with Pacers Sports & Entertainment, which operates the 21-year-old venue.

The renovation to the fieldhouse—which includes extensive interior upgrades such as relocated suites, new club areas, a new scoreboard and extensive tech updates—was expected to feature a massive physical expansion of the pavilion, bringing entrances along Delaware and Pennsylvania Street closer to the curb. While the design went through a few iterations, the proposed changes saw most of existing brick replaced by a large curtain-glass wall encapsulating the pavilion.

“The reason we decided to change the entry pavilion is, after looking at it operationally … it just became clear that we could do everything we needed to do without a giant expansion,” said Mel Raines, executive vice president for corporate communications, community engagement and facility operations at PS&E.

The changes are not expected to affect the interior updates to the facility, but will instead focus only on the entry pavilion, which includes entrances on Delaware and Pennsylvania Streets, she said.

Plans are still in place for the 1.5-acre plaza directly north of the fieldhouse, on land now occupied by a large parking garage and a pair of smaller surface lots. The design of that portion of the project has remained largely the same since it was announced in April 2019.

Raines said updates to the facade will occur this summer and likely bleed into early fall, but it’s not expected to interfere with the Pacers’ regular season.

“[The new design] does everything we wanted it to do,” she said. “It became clear in working with [the CIB] and our construction folks that we liked it better, so we decided to go forward with this plan.”

The fieldhouse is well into the first phase of its renovations, with work on that portion of the project expected to conclude in March. Some visitors have already had an opportunity to preview the changes, specifically friends and family attending Pacers games and controlled-environment college basketball events.

The public will have its first opportunity to see the improvements during Disney on Ice, which runs Jan. 12-18 and will have limited capacity.

The CIB’s Andy Mallon said bids are currently out for the second and third phases of the project, with movement expected on those in the coming months.

That’s out on the street,” he said. “We’ll award those contracts in February and March, as our cash flow goes up.”

The IHPC approved the changes during its meeting Wednesday.