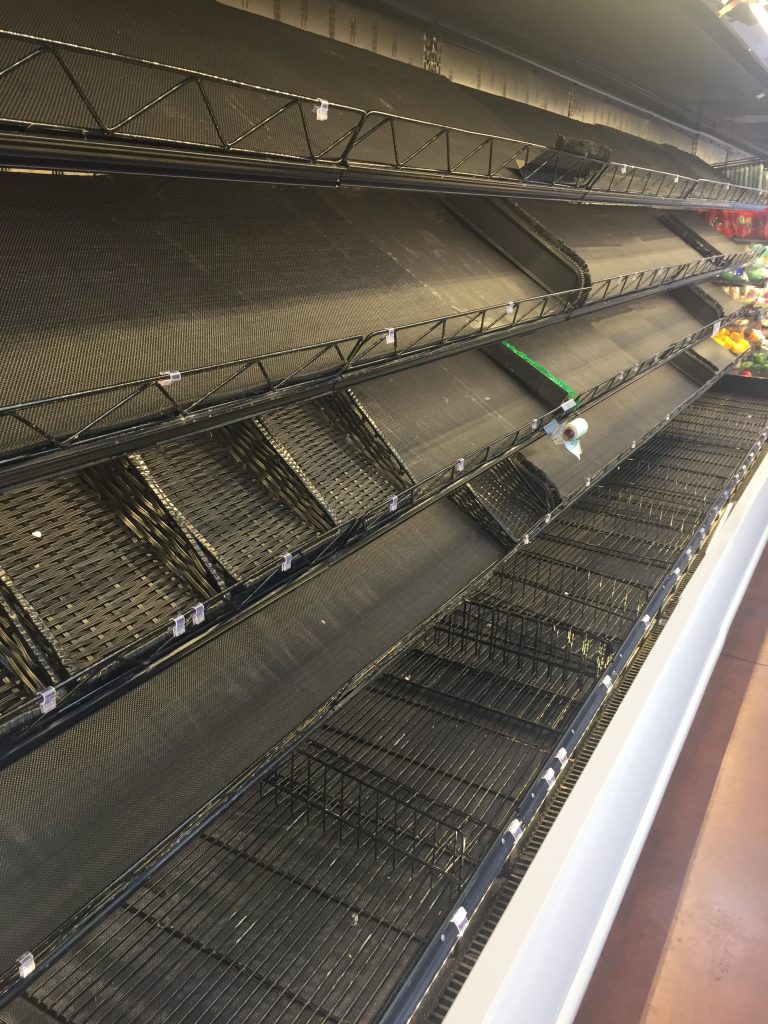 Grocers big and small are hiring more workers, paying overtime and limiting purchases on certain high demand items as they scramble to restock shelves that have been wiped out by panic shopping in response to the global viral pandemic.

Amazon said Tuesday that it will only accept shipments from suppliers of cleaning equipment, medical supplies and household goods at its warehouses for the next three weeks to fill surging demand. It is hiring 100,000 people across the U.S. to keep up with a crush of orders as more people stay at home and shop online. It will also temporarily raise pay by $2 an hour through the end of April for hourly employees.

Many grocers are also limiting purchases of products like Purell sanitizers, Lysol cleaning spray and canned soup so that there is enough to go around. And companies like Walmart and Wegman’s are curbing store hours for the public in order to give workers time to restock shelves.

The moves come as industry executives insist supply chains remain strong despite frustrated customers showing up to stores and sometimes walking away empty-handed.

“When you have runs at grocery stores, there is a little time needed to catch up,” said Lowell Randel, vice president for government and legal affairs at the Global Cold Chain Alliance, a trade group representing the refrigerated warehouse and delivery industry.

The National Retail Federation and the Retail Industry Leaders Association on Sunday urged shoppers to restrain themselves, asking that if they didn’t need an item in the next two weeks to leave it for someone else who does.

“Hoarding and stockpiling creates unnecessary gaps between the time that someone who truly needs a product can find it back on retailers’ shelves,” they said in a statement. “This is particularly important for our most vulnerable neighbors—the elderly and those who are struggling with other health issues.”

Some stores like Stop & Shop, a Northeastern grocery chain, and Australia’s Woolworth are implementing special hours to accommodate elderly customers, who have been avoiding crowds that leave them susceptible to COVID-19, the disease that has infected nearly 130,000 people worldwide and caused more than 4,800 deaths. Jim Barth, owner of a family-owned butcher in New Providence, N.J., recently started a delivery service catering to older or sick customers but stopped taking online orders after getting inundated with other shoppers who were also trying to avoid crowds.

In France, the Rungis distribution center outside Paris feeds about a quarter of the country’s population. Food arrives there from producers all over France—cheese makers, farmers, orchards and more—and elsewhere in Europe, to be parceled out to the supermarkets across the country’s north. Normally popular with tourists hardy enough to arrive when it opens in the wee hours, it’s been closed to all but the 12,000 employees.

French officials, like those elsewhere in Europe, say there’s no reason for shortages if customers shop reasonably. In Paris on Monday, residents raided supermarkets in anticipation of a lockdown.

Border closures to keep out the sick are also posing problems around a Europe designed for open frontiers. In Slovenia, which lies in the path from Italy and Austria to the Balkans, cargo trucks recently waited for more than 24 hours for checks.

To help ease the bottleneck in the U.S., the federal government has suspended rules that limit the number of hours that truckers can drive. And on Sunday, President Donald Trump had a conference call with 30 food, grocery and beverage retail executives who recommended certain actions like establishing a point person in the administration to oversee coordination with various government agencies in order to deliver essential food supplies faster to stores.

Meanwhile, manufacturing facilities are seeking exemptions to state and local restrictions that limit the size of public gatherings so that they can keep moving their products. And retailers are wrestling with labor shortages as workers worry about being exposed to the coronavirus and stay home.

For the workers who show up, sheer exhaustion is taking a toll as they must work faster while dealing with angry customers. Barth said his workers are now taking on longer hours to fulfill higher customer demand that has spilled over from big chains like Costco and ShopRite.

Brittney Legowski, a part-time college student who works as a personal shopper at a Walmart store in Menomonie, Wisconsin, says she started feeling more overworked late last week when online orders spiked. She picks about 100 items per hour for a typical customer; now, she’s picking 170 items an hour and up to half of them aren’t available.

“We’re racing through the aisles just to keep up,” said Legowski, who has gotten yelled at by irate shoppers and is thinking of quitting.

Scott Nash, CEO of MOM’s Organic Market, which operates 19 stores in Virginia and Maryland area, says that his business has doubled in the last two weeks. His stores use to sell $50,000 worth of food a day; now, it’s $100,000. But out-of stock items have shot up to 1,500; typically, they number around 150 in normal times.

Nash noted the problem is not the food supply but how quickly shoppers are grabbing it. He said that inventory turns were typically on average about every 10 days. Now they’re about every five days.

He said his 1,500 workers are working overtime to stock shelves and some are starting to call out sick because they’re tired. But he believes that the panic buying is going to wane.

‘’People can only fit so much in their stomachs and pantries,” he said.