Home » Construction of South Meridian condo project might be phased 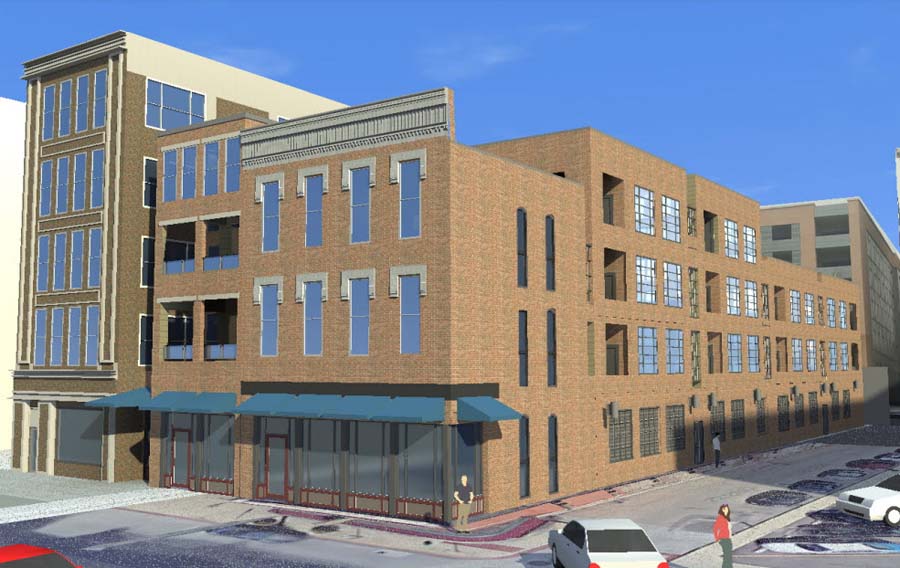 The developer of Meridian Condominiums envisions the full project (pictured) unfolding in three phases. (Image courtesy of the city of Indianapolis)

The developer behind a condominium project along South Meridian Street across from Circle Centre mall plans to shrink the development and split it into multiple construction phases.

Jupiter Group, which controls the land at 111-119 South Meridian St., would build an addition on the former site of Krieg Bros. Religious Supply House at 119 S. Meridian St. and a thin strip of vacant land immediately to the north.

The addition, ranging from three to four stories, would include up to 31 parking spaces and 12 condos.

The Meridian Condominiums project, approved in 2017 by the Indianapolis Historic Preservation Commission, was initially expected to include an addition with as many as six stories—blending new construction with the existing façade—with 24 residences.

About two-thirds of the Krieg Bros. building was demolished in 2018, after it was determined that structural issues were too costly to repair.

But Jupiter was forced to rethink the project after anticipated costs ballooned past the expected $8 million to $10 million, to more than $14.5 million, developer Rick Coombes told the IHPC during its Nov. 6 meeting.

Coombes asked the IHPC to consider approval for the project changes, which is required because the development is in the historic Wholesale District downtown.

The updated condo project would be split into either two or three phases, he said—but members of the IHPC said they had concerns about the proposed order of construction.

As presented, the first phase would be three stories tall and sit on the rear portion of the site, featuring at least four condos on the second and third floors and a 16-space garage on the first floor. Some of those spots would be available for residents of that building and the neighboring condo building at 111 S. Meridian St.

The second phase would be four stories tall and mesh new construction with the rear of the Krieg Bros. building at 119 S. Meridian St., adding 15 more parking spaces and another six condos.

The last phase would involve building infill between that building and 111 S. Meridian St., adding 1,765 square feet of first-floor retail, along with two condos on upper levels, according to plans filed with the IHPC.

A vote by the IHPC on the updated project was continued to at least December, allowing staff more time to evaluate the plans for the site.

Commission members said they had concerns about the staging of the project, and suggested Jupiter reconsider its phasing order to prevent cutting off construction access points.

“I’m more concerned about the cost of closing off Meridian Street to get construction access to that front wall you plan to build at some point,” said Bruce Stauffer, vice president of the IHPC.

Stauffer said he believes the developer will determine that the cost of shutting down Meridian Street will be too great, leading Jupiter to abandon that part of the development, leaving a large hole that would be difficult to develop otherwise.

Coombes and Steve Alexander, of the Indianapolis-based Prince Alexander architecture firm that is designing the project, said they plan to take the commissioners’ thoughts into consideration.

Plans submitted to the IHPC show most of the condos will be around 1,650 square feet, although a few are expected to be much larger, up to 2,830 square feet. There will also be two rooftop penthouses and other rooftop gathering spaces.