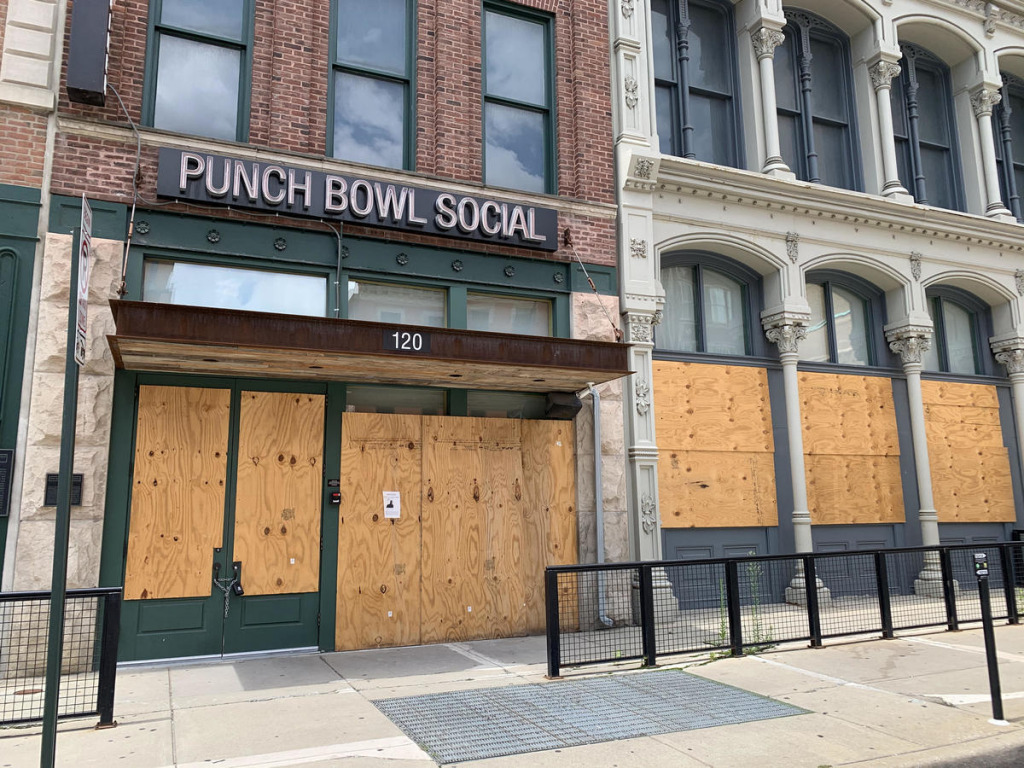 The restaurant-and-entertainment chain Punch Bowl Social, whose Indianapolis location at 120 S. Meridian St. in Circle Centre mall has been closed since the start of the pandemic, has now filed for Chapter 11 bankruptcy reorganization.

According to the initial bankruptcy filing, the company’s largest single unsecured debt is a $10.1 million loan from the Paycheck Protection Program—a Small Business Administration COVID-19 relief program designed to help small businesses weather the disruptions of the pandemic.

Punch Bowl’s other debts include a $707,894 lease obligation to Circle Centre mall, making Circle Centre the fourth-largest unsecured creditor in the case. Indianapolis-based Simon Property Group manages Circle Centre and is one of 20 local companies that makes up the Circle Centre Development Co., an entity which provided $75 million of the mall’s $320 million development cost.

The Indianapolis location, which occupies 23,000 square feet, opened in December 2016.

Punch Bowl also owes $763,173 in lease obligations to The Domain, an Austin, Texas, mall that Simon owns and operates.

The initial bankruptcy filing lists only Punch Bowl’s 30 largest unsecured creditors, but the company lists both its total debts and its total assets as being between $10 million and $50 million.

Punch Bowl’s operating concept, which is built around shared activities including karaoke, bowling, games and dining, has been upended by the pandemic.

“In a now too-familiar tale, the Debtors’ businesses were immediately and significantly adversely affected by COVID-19,” Punch Bowl said in a bankruptcy document.

Before the pandemic, about two-thirds of the company’s revenue came from corporate and private events, it said in bankruptcy filings.

The chain closed all of its locations at the beginning of the pandemic. It has since reopened three locations, in Arlington, Virginia; Austin, Texas; and Atlanta. Eleven other locations have remained closed.

Those 11 are in Chicago; Cleveland, Ohio; Dallas; Denver; Indianapolis; Milwaukee, Wisconsin; Minneapolis, Minnesota; Portland, Oregon; and in California in the cities of Rancho Cucamonga, Sacramento and San Diego.

Punch Bowl said in the bankruptcy document that it would immediately close its three operational locations in an effort to preserve its cash.

“Each of those venues was losing money on a daily basis” because of the effect the pandemic was having on the business, the firm said of the three venues that had reopened.

The company described its business as being in a “mothballed period” and that it anticipates “the reopening of the venues, once it is safe to do so.” The document does not specify which locations it plans to reopen.

As recently as Dec. 4, a Punch Bowl representative told IBJ that the company hoped to reopen the Indianapolis location in January.

Punch Bowl had 20 locations at the start of the pandemic but has since announced permanent closures for several locations, including those in Schaumburg, Illinois, and Stapleton, Colorado.