RE/MAX is suing one of its local franchisees for allegedly instructing his employees to join a national competitor so that he could later follow them and collect a recruitment bonus.

Denver-based RE/MAX LLC and RE/MAX Integrated Regions LLC filed a complaint in federal court last month against James “Jimmy” Dulin and The Hamilton Group Inc., which does business as RE/MAX Ability Plus.

The lawsuit claims Dulin breached his RE/MAX franchise agreements in Carmel, the Village of West Clay, Lafayette and Lebanon by disparaging the company and helping more than half of his sales associates defect to Bellingham, Washington-based eXp Realty, a fast-growing, internet-based real estate firm that has agents on the ground in 40 states.

Representatives for both RE/MAX and eXp declined to speak about the pending litigation. Dulin declined an interview.

“I’m going to voice my responses through the court system, not through the paper,” he said.

RE/MAX also claims Dulin violated the company’s trademark by allowing eXp agents to work out of the RE/MAX Ability Plus office in the Indiana Design Center, at 200 S. Rangeline Road in Carmel.

Dulin’s attorneys had not filed a response to the lawsuit in court by this story’s deadline.

RE/MAX sued Dulin after it settled a separate lawsuit it filed against eXp Realty in May that accused the company, which launched in 2009, of “tortious interference with existing contracts.” That suit said eXp had “induced” multiple RE/MAX franchisees to abandon their franchises before the end of the agreed-upon term.

A RE/MAX spokeswoman told The Denver Post in a statement that the agreement “involved a reiteration of eXp policies prohibiting tortious interference.” An eXp spokesman told the paper the settlement did not include an exchange of money.

That has led to campaigns by eXp brokers across the country to recruit other agents.

In fact, the web is filled with testimonials and videos with titles such as, “How to move your mega agent team or independent brokerage to eXp Realty,” and, “Was it worth it? One year after our move to eXp Realty.”

Other companies have created videos explaining why they did not make the move to eXp.

Judith Wright, a clinical assistant professor of business law at the Indiana University Kelley School of Business, said it’s tough to judge RE/MAX’s lawsuit against Dulin and his agency given that he hasn’t filed a response. That can make the case look pretty one-sided at this point, she said.

However, Wright said she’s seen similar cases in which one party in a non-compete agreement begins to prematurely transition to his or her next step.

“It kind of feels to me like this Realtor is kind of ready to move on and work with someone else. That can happen at the end of a franchise agreement,” Wright said.

“Some of the allegations written by RE/MAX here—if substantiated—would appear to be direct violations of the agreements,” she added. “But they’re just allegations at this point.”

RE/MAX Ability Plus, established in 1988, ranked seventh on IBJ’s list of largest Indianapolis-area residential real estate agencies in 2020. The company reported to IBJ that its 130 licensed agents sold a total of $607.9 million worth of homes that year.

In 2016, Dulin ranked ninth on IBJ’s all-star solo agent list after having grown from $14 million in sales in 2014 to more than $35 million that year. His specialty: the sales and marketing of homes in Carmel, Indianapolis, Fishers, Westfield and Zionville.

In its complaint, RE/MAX outlines a series of claims about Dulin’s activities under a previous RE/MAX subfranchisor: RE/MAX of Indiana Limited Partnership, which did business as RE/MAX Integra Midwest until it was acquired by RE/MAX and renamed RE/MAX Integrated Regions LLC in July.

The complaint alleges Dulin faced various business challenges while working under RE/MAX Integra. RE/MAX claims the subfranchisor allowed Dulin to terminate four franchise agreements early, waived more than $450,000 in past-due fees and acted as a mediator when his top agent threatened to leave over an unpaid six-figure commission.

“Dulin has engaged and continues to engage in a course of conduct that, by his own design, is undermining his franchises and harming the RE/MAX brand and the goodwill associated with it,” the lawsuit reads.

During that time, RE/MAX said, 14 of Dulin’s sales associates left his Carmel and Lebanon locations to join eXp—the first of more than 40 who would come to do so.

While RE/MAX points to those moves as indicators of a coordinated effort, Wright said it will be a challenge to show how the mass exodus was anything other than those employees’ desires lining up with what eXp was offering.

“They’re going to have to prove this whole conspiracy,” she said. 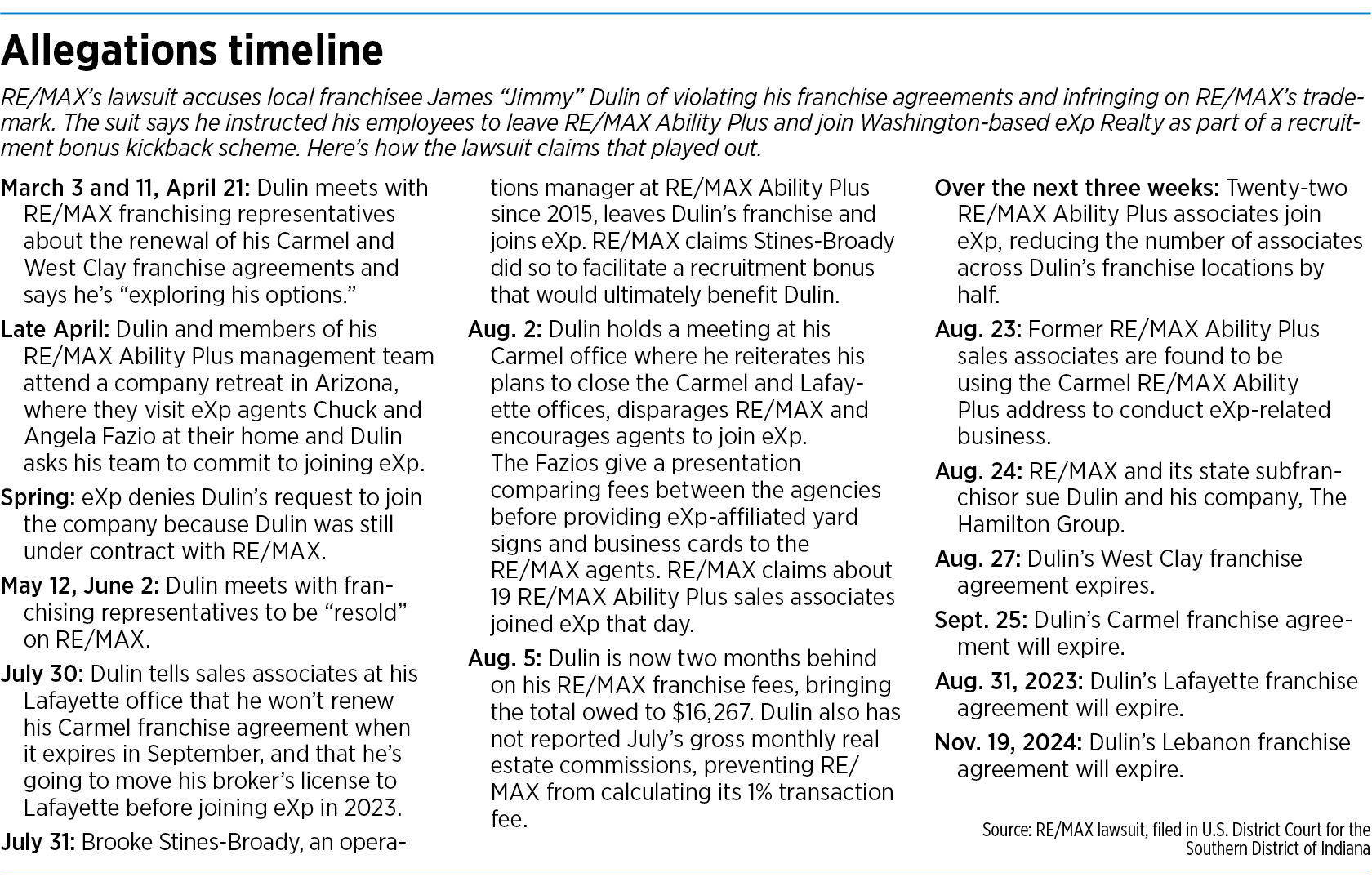 RE/MAX said in its lawsuit that Dulin and members of his staff met with RE/MAX Integra representatives this spring to discuss the renewal of his Carmel and West Clay franchise agreements, and Dulin said he was “exploring his options.”

Then, in late April, Dulin allegedly broke his tradition of hosting an annual company retreat in Indianapolis, moving it instead to Arizona, where he and his management team allegedly went to the home of eXp agents Chuck and Angela Fazio. The suit said Dulin asked his employees then to join eXp and take part in the company’s revenue-sharing plan.

The Fazios did not respond to IBJ’s requests for comment.

As described in the complaint, eXp’s benefits include a plan that compensates “sponsor agents” who recruit new hires and receive a percentage of those hires’ commissions. That revenue-sharing plan then extends to the agents those hires subsequently recruit, reaching as far down as seven tiers of succession. Under that structure, the Fazios and Dulin would benefit financially from recruiting agents from RE/MAX Ability Plus.

According to the lawsuit, Dave Conord, eXp’s head of U.S. growth, said in a sworn statement that Dulin called him in the spring to express interest in joining eXp, along with his team at RE/MAX Ability Plus. However, Conord told Dulin he couldn’t join due to his lengthy franchise agreements with RE/MAX.

RE/MAX claims that, to get around that roadblock, Dulin instead entered into an agreement with Chuck Fazio, Angela Fazio and/or Brooke Stines-Broady, an operations manager at his RE/MAX Ability Plus office since 2015. Under the alleged agreement, Stines-Broady would leave RE/MAX Ability Plus and join eXp, naming either Chuck or Angela Fazio as her eXp sponsor. She would then remit the revenue-sharing plan compensation she received to Dulin.

Stines-Broady left RE/MAX Ability Plus on July 31 and now works for eXp. She declined to talk to IBJ for this story.

The remaining offenses alleged by RE/MAX pertain to events at Dulin’s local offices. In addition to allegedly admitting his plans to join eXp when the Lafayette franchise agreement ended in 2023, RE/MAX claims Dulin held a meeting at his Carmel office on Aug. 2 to discuss the moves with employees.

RE/MAX alleges that—after encouraging his RE/MAX Ability Plus sales associates to join eXp, Dulin; his wife, Tammy; and Stines-Broady left the room so the Fazios could give a presentation comparing eXp’s fees and expenses to RE/MAX’s.

They also allegedly made yard signs and business cards for the RE/MAX sales associates that affiliated them with the Domi Agency, which is brokered by eXp.

The complaint continues to say that, as of Aug. 24, more sales associates were expected to follow suit.

“If proven, that would be extraordinary that 40 people went to work for the same competitor,” Wright said.

“There’s definitely competition to bring a good-producing agent from one company to another. That agent is going to bring in business; that brand name is going to bring value to their company,” Cockerham said. “But, to actually go into a company and recruit, that would not be common.”

But even though the agents quit the RE/MAX franchise, they might not have gone far.

As a result, RE/MAX is claiming Dulin has infringed on RE/MAX’s trademarks “by enabling eXp agents to work out of at least one of his RE/MAX franchise locations, thereby creating substantial consumer confusion in the Indianapolis market regarding the (non-existent) affiliation between the RE/MAX brand and eXp.”

Wright said she thought it likely that a client could be confused about the relationship between RE/MAX and eXp if he or she were to go through a door with a RE/MAX-branded hot air balloon on it only to be greeted by an eXp agent.

Cockerham said, though he’s not seen Dulin’s executed franchise agreements, a significant portion of those contracts are designed to protect the brand.

“The brand is the overall company’s value,” he said. “It sounds like they’re starting to do business as another franchising company while they still have the franchising agreement in place.”

But Vic Indiano, a patent attorney at Indianapolis-based Indiano Law Group, said he finds it unlikely that consumers would be confused.

Indiano said the trademark infringement component of RE/MAX’s complaint is secondary to the main breach-of-contract claims.

RE/MAX claims Dulin and his franchises have stopped paying the fees they own under the agreements. As of Aug. 5, those unpaid fees totaled more than $16,267. Furthermore, RE/MAX claims Dulin failed to report the gross monthly real estate commissions his offices generated in July, thereby preventing RE/MAX from calculating its 1% transaction fee.

In addition to those amounts, RE/MAX is seeking damages for the breach-of-contract and trademark infringement. Just how Dulin and his attorneys respond has yet to be seen.

“If RE/MAX gets hurt, their hurt is going to come because they have a lot of talented agents who are no longer going to be giving them a franchise fee because they’ve gone with someone else. They’re not going to be hurting because their name has been damaged,” Indiano said. “The breach of contract is the most likely hook.”•