Home » READI funding snag might rule out some projects

A catch in the federal funding source for Indiana’s regional grant program is causing central Indiana officials to reevaluate which projects actually qualify.

Local and state officials learned in January that several projects included in plans that had been awarded Regional Economic Acceleration and Development Initiative grants just a month before might now be ineligible because of rules attached to the funding.

The $500 million READI program, approved by the Legislature last spring, is funded by the American Rescue Plan Act, which has specific guidelines on how its funds must be spent. The act’s focus is on pandemic-related recovery, not general economic development.

Though the Indiana Economic Development Corp. knew when the READI program was created that it would be funded through ARPA, the exact strings attached were not fully known until two months ago, when the U.S. Department of Treasury released the final rules.

IEDC had just divided the $500 million among 17 self-formed regions around the state that had submitted proposals by Aug. 31.

It turns out that not every project in the program envisioned to improve quality of life and place around the state will fit the bill for eligibility.

Mark Wasky, IEDC’s senior vice president of community affairs, said the IEDC is still working with regions to navigate the federal rules and determine which projects are eligible for READI money. The IEDC hired Ernst & Young Global Ltd. as a consultant to ensure regions are in compliance.

Evaluation guidelines given to the regions to help them draft proposals did not mention that projects would have to comply with American Rescue Plan Act rules. Regions were told limitations might be added later, Wasky said, but they were told to not let that limit their plans.

“We didn’t want to, I guess, hit the reset button on what the intention of the program was,” he said. “We encouraged regions to continue down the path that was originally set, and that we would work on figuring out the details.”

He also noted that most regions did not receive their full funding requests to begin with, so they were always aware that each project might not get every dollar requested.

Economic development leaders in some central Indiana regions said they were not told about the American Rescue Plan Act guidelines until January, when the IEDC hosted a kickoff presentation meeting for the regions.

Molly Whitehead, executive director of the Boone County Economic Development Corp., who is leading the 180 Alliance region, said knowing those details earlier would have influenced how her group’s proposal was drafted.

180 Alliance was formed by Boone, Hendricks, Johnson, Montgomery, Morgan and Putnam counties. The focus of the region’s 30-project plan is providing a range of housing and quality-of-life amenities for the increasing number of people moving to those areas. The region received $20 million in READI funds out of the $50 million it requested.

Projects include a huge mixed-use development with apartments and retail at the soon-to-be Interstate 69 corridor in Johnson and Morgan counties, arts centers and mural projects, and a sports complex in Boone County.

With so many projects proposed, Whitehead said it’s now a new challenge to go back and reevaluate which ones fit the ARPA guidelines, and many might not.

She said this is a significant snag in the READI program. And while she remains appreciative of the opportunity and looks forward to making the funding work, she said many now-eligible projects might not fit READI’s initial purpose of being a placemaking tool.

“It is just an even larger challenge now than it maybe was even last summer. … It’s trying to figure out the question, are we following READI guidelines? Are we following the ARPA guidelines?” Whitehead said. “There’s just an awful lot of questions that are out there.”

In general, ARPA funds must be used for programs, services and capital expenditures that “respond to the public health and negative economic impacts of the pandemic,” the final rules say. General economic development or workforce development proposals that “seek to more generally enhance the jurisdiction’s business climate” don’t qualify.

Capital projects such as stadiums, sports complexes or convention centers are also ineligible. So, it’s doubtful that the sports complex in the works in Boone County will qualify for grant money, Whitehead said.

Affordable-housing options are eligible for the federal funds. Several regions proposed housing developments, but which ones qualify under the housing umbrella will have to be determined on a case-by-case basis, Wasky said. Eligibility of mixed-use developments that include apartments, town houses and retail spaces could depend on whether affordable housing options are included.

Water, sewer and broadband infrastructure improvements would qualify for ARPA funds, according to the final rules. Several regions proposed these types of improvements in their plans, including 180 Alliance and the White River region in Hamilton, Madison and Marion counties. 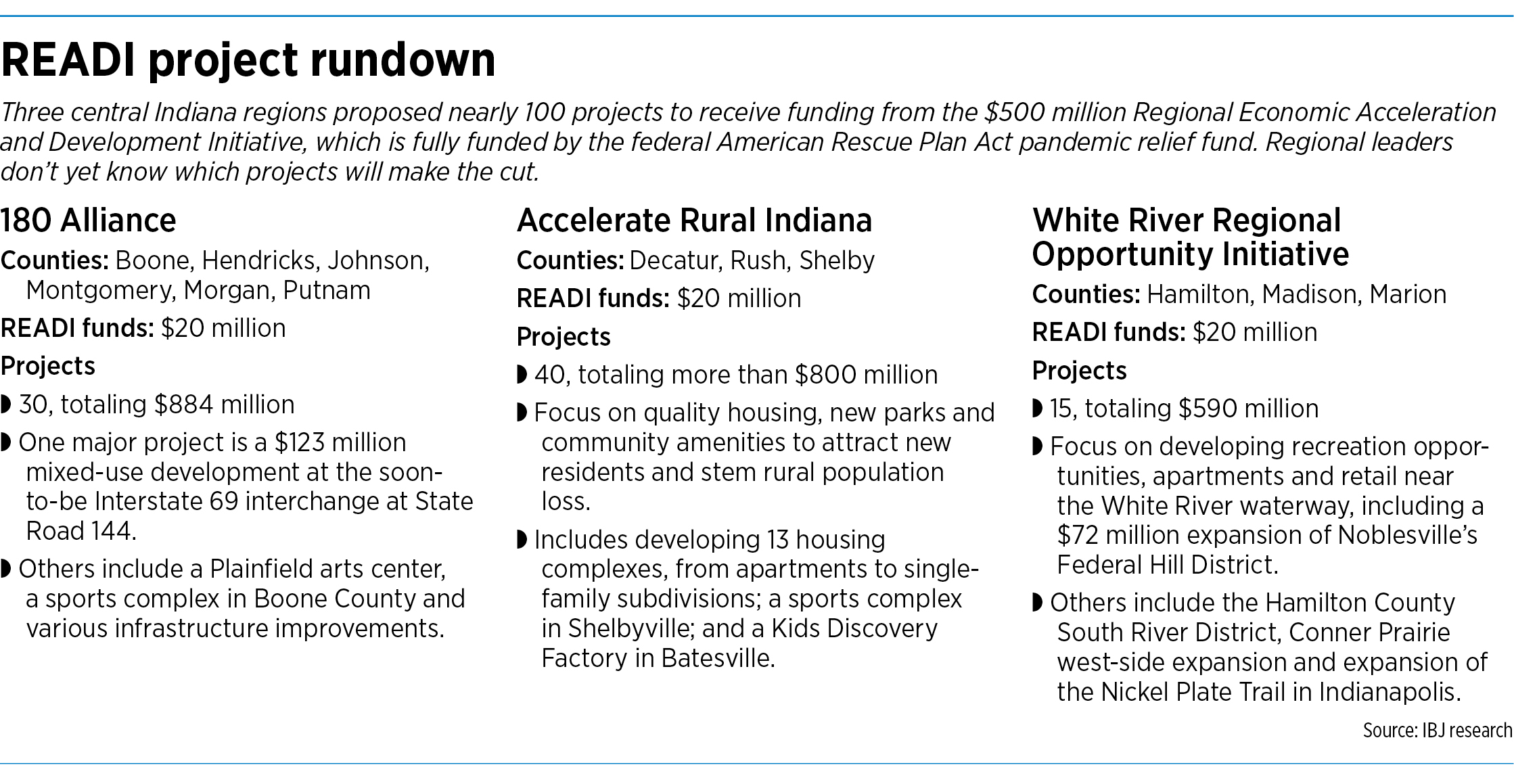 The IEDC’s goal is to not leave regions hanging out to dry with no funding for their wish lists, Wasky said.

The agency is committed to working with regions, he said, to find other sources of state or federal funds to fill in any gaps in funding for proposals that don’t make READI cut. He remains confident each region will find a way to use the entirety of its regional grant.

“Our commitment is to be able to find some way … whether it be through these federal dollars or through other means, to help them implement their plans,” Wasky said. “Because that is, you know, the reason why this initiative was created originally.”

IEDC officials are meeting with regions regularly to help them narrow project priority lists, he said.

Bryan Robbins, Greensburg economic development director and leader of the Accelerate Rural Indiana region, said the federal limitations were unexpected but he still sees READI as a significant opportunity to improve the state, especially rural areas like his.

Accelerate Rural Indiana is made up of Decatur, Rush and Shelby counties; it received $20 million in READI funding.

“I mean, you can get upset and mumble and kick rocks and such, but in the end for us … for a new region, a region that we think has a lot of potential, we will take what we can get,” Robbins said.

He said he feels confident about working with the IEDC to find other funding sources for the projects deemed ineligible. Discussions on project priorities are ongoing as the region reevaluates its plan, which includes 40 projects that total more than $800 million.

The plan’s focus is heavy on creating more quality housing, and new parks and community amenities, to attract new residents and stem rural population loss. Projects include developing 13 housing complexes, from apartments to single-family subdivisions; park improvements; a sports complex in Shelbyville; and a Kids Discovery Factory in Batesville.

The final ARPA rules could ultimately be interpreted broadly, so regions can submit arguments for why they think their projects are eligible. Robbins said his region can make an argument that the improvements to parks and recreational activities are to better public health, which might make those projects eligible. Projects such as market-rate housing or workforce development programs might not make the cut, though, he said.

Robbins said a strong showing in the first round of projects is important.

“If we can show success with these first projects, the elected officials at the state will see the transformative impact programs like READI can have, particularly on rural regions, and consider sustaining the program for a second or even a third round,” he said.

Gov. Eric Holcomb said in December that he would lean into the success of the program to ask the Legislature for more funds next year.•

3 thoughts on “READI funding snag might rule out some projects”