Home » Recalling 1969—a big year in space and sports 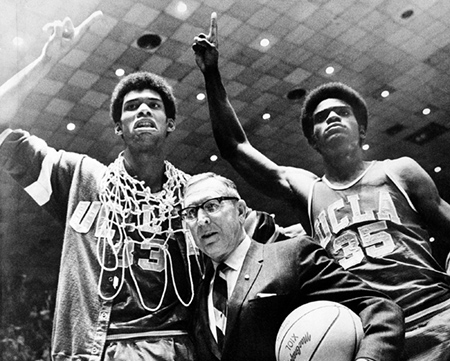 … one giant leap for mankind

Fifty years ago this weekend, the most-talked about man in the world was a Purdue alum, who chose that school partly because he was a football fan and got excited as a kid, sitting in the stands the day the Boilermakers upset Ohio State in 1945. Purdue loses that one, and it might have been Neil Armstrong of MIT.

Something else was taking a giant leap in 1969 while NASA was leaving footprints on the moon. Sports. It was a monstrously landmark year, amid the glory of Apollo 11, and what’s remarkable is how many Indiana guys had their fingerprints on all the history being made.

Six months before Armstrong walked on the moon …

Pro football was changed forever when the New York Jets shocked the 18-point favorite Baltimore Colts in Super Bowl III. The 1969 season would be the last with the NFL and AFL as separate entities. Joe Namath’s famous guarantee of victory is remembered most, but he needed to complete only 17 passes in that win. The game plan that exploited flaws in the Colts’ rushing defense was devised by the mild-mannered head coach, Weeb Ewbank. Born and raised in Richmond.

Ewbank, a soft-spoken type, was mortified when he heard what Namath had done. “I could have shot him,” he later said.

Four months before Armstrong walked on the moon …

UCLA became the mightiest dynasty in college basketball history as the first team to win three national titles in a row and five in six years. Lew Alcindor’s dominance inside was the catalyst, but the professorial coach had grown so renowned, people had taken to calling him a Wizard. John Wooden, of Martinsville. Wooden’s fifth title put him in front for most championships by a coach—possibly forever.

The team Wooden beat for the unprecedented threepeat? His alma mater, Purdue, with a fearless gunslinger named Rick Mount. Fifty years later, that remains the Boilermakers’ only championship game appearance.

Two months before Armstrong walked on the moon …

The Boston Celtics, which had finished fourth in the Eastern Division, upset the Los Angeles Lakers in seven games to win the NBA Finals. It was Bill Russell’s last season and the end of the Celtics dynasty. The dark ages were ahead for the NBA in national popularity—until two guys named Magic Johnson and Larry Bird came along 10 years later.

Two days after the Celtics won, the Oakland Oaks defeated the Indiana Pacers 135-131 to take the ABA Finals 4-1. It was only the second season of existence for the Pacers, but it inspired big plans. A fiery man who was selling class rings for a living had taken over as coach, with designs on the next step. He knew about titles, since his free throw gave IU the national championship in 1953. Bobby Leonard. Indiana would win the ABA in 1970, and twice more after that, building credibility that would lead to a spot in the NBA. And make Slick a local icon.

Seven weeks before Armstrong walked on the moon …

Mario Andretti won the Indianapolis 500 in a backup car. The day would grow in auto racing historical magnitude as the decades went by, with no more checkered flags for Mario, or anyone else named Andretti.

The day Armstrong walked on the moon …

The Clay Court Championships were set to start in Indianapolis the next day, and the local pro football team was preparing to open training camp. The Indianapolis Capitols, from the Continental Football League. Both Clay Courts and Capitols are long gone.

Meanwhile, seven of the top 12 hitters in the National League were playing for the Cincinnati Reds, including several young players: Pete Rose, Tony Perez and Johnny Bench. One day soon, people would call them the Big Red Machine. Baseball had radically changed in 1969. Four new teams were added—who can forget the immortal Seattle Pilots, who lasted only one year before they moved to Milwaukee to become the Brewers? The leagues had been split into divisions for the first time, and the mound had been lowered, in reaction to pitchers utterly dominating the sport in 1968, when the overall batting average in baseball was .237. But no one could guess the biggest change of all to come.

Two months after Armstrong walked on the moon …

What state had three teams ranked in college football’s Top 20 as the season began? Indiana, of course. Notre Dame, IU—only two years removed from going to the Rose Bowl—and Purdue, hoping for a big year since it was the last season for legendary Jack Mollenkopf. They wouldn’t stay in the polls together for long, as the Hoosiers faded to a 4-6 record.

Three months after Armstrong walked on the moon …

Baseball saw a new champion for a new age. The New York Mets—the very symbol of ineptitude for a decade, having never finished higher than ninth—came from 10 games behind to roar past the Cubs for the division title, swept Atlanta in the first-ever league championship, then shocked the mighty Baltimore Orioles in five games in the World Series. It was the first expansion championship, by the unlikeliest team. The manager who made it happen for the Mets? The guy who became a rock star to New York fans during the season when he walked to the outfield in the middle of an inning to take out a player he felt wasn’t hustling? Gil Hodges, born in Princeton, and a star at Petersburg High School.

In the clubhouse to shake hands with Hodges afterward: Weeb Ewbank. Two Indiana boys who had hit the big time in New York City.

The night before the Mets clinched, the Cincinnati Royals opened the NBA season. Another change was coming. It would be the last season with their superstar, who was yearning to leave for a place where he could win a championship. Oscar Robertson. A year later, he’d be a Milwaukee Buck, to join forces with Kareem Abdul-Jabbar and win the ring he had sought for so long.

Four months after Armstrong walked on the moon …

Pummeled by Ohio State 50-14 the year before, Michigan turned college football upside down and shocked the No. 1 Buckeyes 24-12. An earnest new coach had made the difference. It was the first salvo of the Ten Year War between Bo Schembechler and Woody Hayes. For the next decade, the rest of the Big Ten would only be spectators.

Five months after Armstrong walked on the moon …

There was a college football earthquake in northern Indiana. Notre Dame had recovered from an early season loss to Purdue to go 8-1-1. But more than that, after 44 years of saying no, the Irish consented to go to a bowl game. They’d lose in the Cotton Bowl to Texas on New Year’s Day. By then, 1969 was in the history books.

A half century later, we can understand how much changed that year, in space and in sports. Indiana in the middle of it all.•