Home » Recipe: How to make excellent scrambled eggs, just the way you like them 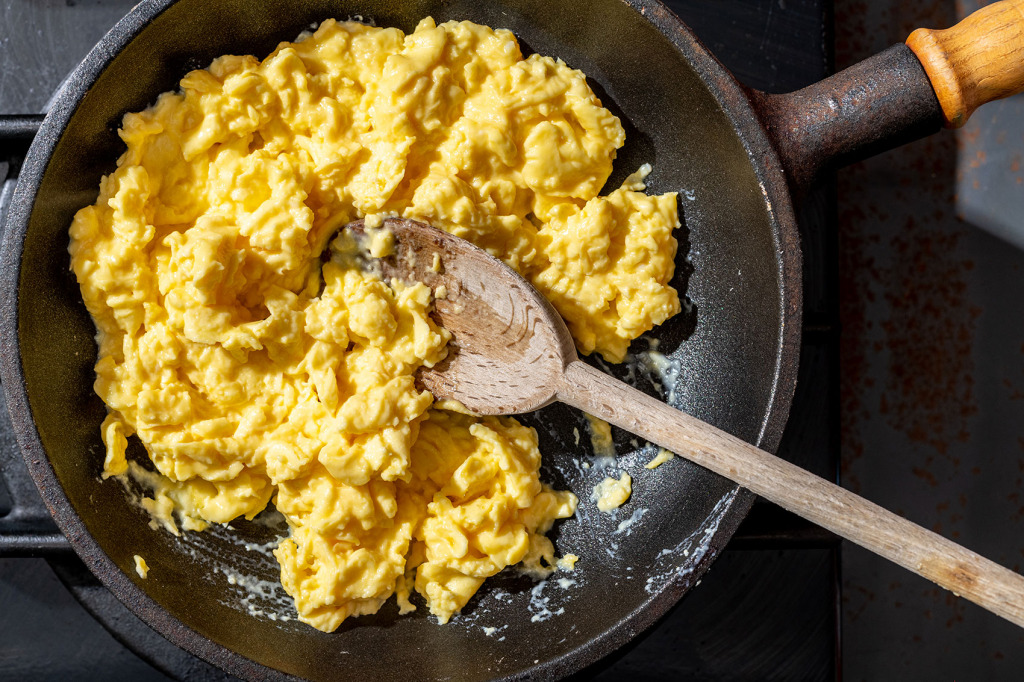 Scrambled eggs are one of the ultimate throw-together meals. Less work than even the easiest poaching, and less fuss than a standard fried.

Still, who hasn’t overcooked scrambled eggs into rubbery unpleasantness? I know I have. Here are a few tips to success, as well as strategies for cooking your eggs exactly the way you want them.

Consider a nonstick skillet. I know, some of you are going to swear you make great scrambled eggs in your well-seasoned cast-iron. And if you do, don’t let me deter you! But for anyone who has struggled with eggs sticking or burning to the skillet, nonstick can be a lifesaver. “Most pans, even the really good ones, are actually filled with little cracks and crevices,” Joseph Provost, a chemistry and biochemistry professor at the University of San Diego, told me last year. Provost, who co-wrote “The Science of Cooking: Understanding the Biology and Chemistry Behind Food and Cooking,” explained that when a pan is heated, the metal expands, which means eggs can get trapped in those microscopic cracks, where they then stick and burn. The coating of a nonstick skillet provides a smooth surface and separates the food from the metal.

Use a smaller skillet. One of the easiest ways to guard against overcooking is using a smaller skillet. My 12-inch nonstick skillet is great for when I want a very thin omelet for folding onto a sandwich. The greater surface area, though, means it’s all too easy for the eggs to dry out quickly. When you want actual curds (whether dense and creamy or light and fluffy), consider dropping the skillet size to 10 or even 8 inches, depending on how many eggs you’re cooking.

Salting. From a taste perspective alone, I have found that adding a little more salt (I favor Diamond Crystal for its easy-to-grasp grains that nonetheless dissolve well) than my instincts would tell me has made a marked improvement in flavor. My eggs have gone from blah to, wouldn’t you know, well-seasoned!

But there’s another reason salting is important for scrambled eggs: It can actually improve the texture. As Harold McGee explains in “Keys to Good Cooking,” heating eggs (more on that below) causes the proteins in both the yolks and whites to stick together, or coagulate. The more that happens, the more dry and rubbery the eggs get. The goal, then, is to keep those proteins from getting too close and squeezing out water. Salt can help achieve that. In “The Food Lab,” cookbook author and food science guru J. Kenji López-Alt explains that the salt serves as a kind of buffer between the proteins. For the best effect, he recommends salting eggs at least 15 minutes before cooking (while you assemble other ingredients/preheat the skillet, perhaps) to allow the salt to evenly dissolve, though just before cooking also helps. He found that salting toward the end of cooking produced tougher eggs that weeped liquid.

Similarly, in “Salt Fat Acid Heat,” Samin Nosrat suggests “a few secret drops of lemon juice” in scrambled eggs. Like salt, acid affects the way proteins bond, in this case affecting the speed and density at which the they coagulate.

Manage the heat. “The key to most good egg dishes is temperature control,” McGee writes. And the biggest danger in scrambled eggs is too much heat, which, as we’ve established, leads to unappealing textures. But playing around with heat also gives you control over what style of scrambled eggs you want. If you like fluffy curds, you need heat to produce steam and cause the eggs to expand. The key is how much and how long. In Cook’s Illustrated, Dan Souza found that a combination of high and low heat helped achieve voluminous but still tender eggs – start at medium-high and drop to low once a spatula dragged through the skillet left very little raw egg in the trail.

For denser eggs with few or almost no curds, work entirely over low heat. Using a saucepan, too, helps keep moisture from evaporating as much. Or you can go extra gentle with a double-boiler situation, with a bowl set over a saucepan of simmering water.

Decide how much you want to shake things up. As Souza notes, beating eggs too much before scrambling actually encourages the proteins to start the process of unfolding and then coming together, which is exactly what you don’t want before the cooking even begins. That’s why he prefers to beat the eggs with a fork, as opposed to a whisk, just until they come together.

You can, within reason, get the proteins to work in your favor. Food52 contributor Alyssa Walker recently wrote about how she likes to combine her eggs for scrambling in a cocktail shaker. Given what I already knew, I was a little skeptical of the method, but I tried it anyway, albeit with a lidded jar. And you know what? It worked. I shook just long enough to bring the eggs together and then took extra care to not overcook them in the skillet. They were some delightfully fluffy eggs.

How much you stir during cooking ultimately affects the outcome, too. Contrary to what you do in advance, constant stirring or whisking will pop any pockets of steam and lead to denser, smoother eggs, says López-Alt. If you prefer big, fluffy curds, gently fold and stir to achieve even cooking but do it as little as possible. Stir a little more often for smaller curds.

Add fat (or don’t). Fat is another way to encourage tenderness and interfere with the bonding of proteins. If you’ve always automatically beaten some milk into your eggs without thinking about it, you’re on to something. Even fattier ingredients are possibilities and will lead to denser, creamier results. Consider creme fraiche. Heavy cream is particularly rich as well. Souza preferred the in-between zone of half-and-half (1/4 cup per eight eggs), which I never have around, so I usually just do equal amounts of heavy cream and 2% milk. To account for slightly backing off the dairy fat, Souza incorporates two egg yolks, which also boosts the egg flavor and color. The ultimate addition is butter. Inspired by Nosrat’s mention of a recipe from writer Alice B. Toklas, I added a whopping four tablespoons of diced butter to four eggs. Between that and the constant stirring, these were the richest, most luxurious and filling – I didn’t eat again for many hours! – eggs I’d ever made. Not an everyday meal, but definitely illustrative of the concept.

Heed this warning from McGee, though, especially if liquid is your fat medium of choice: “Additional liquid ingredients (cream, milk, stock, water) dilute the egg proteins and give a softer result, but also one more sensitive to overcooking and leaking watery juices.” So don’t overdo it.

Don’t overcook. Easier said than done, right? I’ve come across universal advice from a wide variety of sources, which is to remove the eggs from the heat just before you think they’re finished, to let the residual heat do its work. Nosrat recommends as long as 30 seconds: “Let your courage carry you, and the eggs, to the finish line.”

Becky Krystal is a food writer for The Washington Post.