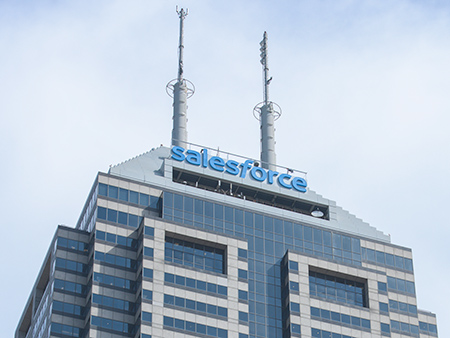 Shares in Salesforce experienced their steepest increase in almost two years on Wednesday after the company raised its annual profit forecast, signaling that demand for business software is holding up despite a broader downturn for major tech firms.

Fiscal-year earnings, excluding some items, are expected to be $4.74 to $4.76 a share, an increase of 12 cents a share from the company’s previous forecast. Revenue will be as much as $31.8 billion, San Francisco-based Salesforce said Tuesday in a statement. Analysts, on average, estimated annual profit of $4.68 a share, according to data compiled by Bloomberg.

“So far, we’re just not seeing any material impact from the broader economic world,” Chairman and co-CEO Marc Benioff said during a conference call after the results. “Our demand environment remains very strong.”

Salesforce, the leader in cloud-based customer management software, maintained hiring and high revenue growth through the pandemic, and expanded its products for business productivity with the $27.7 billion purchase of the messaging platform Slack. Last month, however, the company joined tech sector peers in slowing down hiring and travel to control expenses, according to a report from Insider. Salesforce said full-time equivalent positions rose 30% from a year earlier, to 77,810, when the quarter ended April 30.

About 2,000 Salesforce Marketing Cloud employees are based in Indianapolis.

“We are hiring, but we’re doing it in a much more measured pace,” Chief Financial Officer Amy Weaver said during the call. “We’re focusing the majority of our new hires on roles that will support customer success and the execution of our top priorities.”

In the fiscal first quarter, revenue increased 24%, to $7.41 billion, beating analysts’ projections. Current remaining performance obligation—or contracted sales that have yet to close, which is watched by analysts as a metric of near-term demand—grew 21%, to $21.5 billion. Profit, excluding some items, was 98 cents a share, compared with analysts’ average estimate of 95 cents.

Salesforce said subscription revenue generated by its platform unit, which includes Slack, gained 55% to $1.42 billion—the fastest growth of any division in the quarter.

“Slack continues to exceed our revenue expectations,” co-CEO Bret Taylor said on the call. “This was the fourth consecutive quarter we’ve seen more than 40% growth in customers spending more than $100,000 with Slack annually.”

The shares climbed as high as $173.40 in extended trading after closing at $160.24 in New York. The stock declined 37% this year amid a broad technology rout that has particularly hit software vendors. The downturn left the company undervalued, wrote Mark Murphy, an analyst at JPMorgan, in a research note ahead of earnings.

Salesforce’s 24% constant currency growth in its current remaining performance obligation is a positive development because it remained high even in the face of rising interest rates and inflation, said Anurag Rana, an analyst at Bloomberg Intelligence. “This is the power of Salesforce, where you have a very well diversified revenue stream,” Rana said in an interview.

The company doubled its expected currency headwinds to $600 million for the fiscal year, owing to a strong U.S. dollar. Earlier this month, the Bloomberg dollar index hit its highest point since the early days of the pandemic, and remains elevated.

Sales in the Mulesoft division, which helps customers connect their software across the internet, increased 9%, Weaver said during the call. A sales slowdown last year for the unit alarmed investors. Weaver said Mulesoft revenue is more volatile than other products, and that growth should pick up toward the second half of the fiscal year.

Management is also under internal pressure to cut ties with the National Rifle Association after the school shooting in Uvalde, Texas. Thousands of employees have signed a petition addressed to the company’s management team including Benioff, according to SFGate.