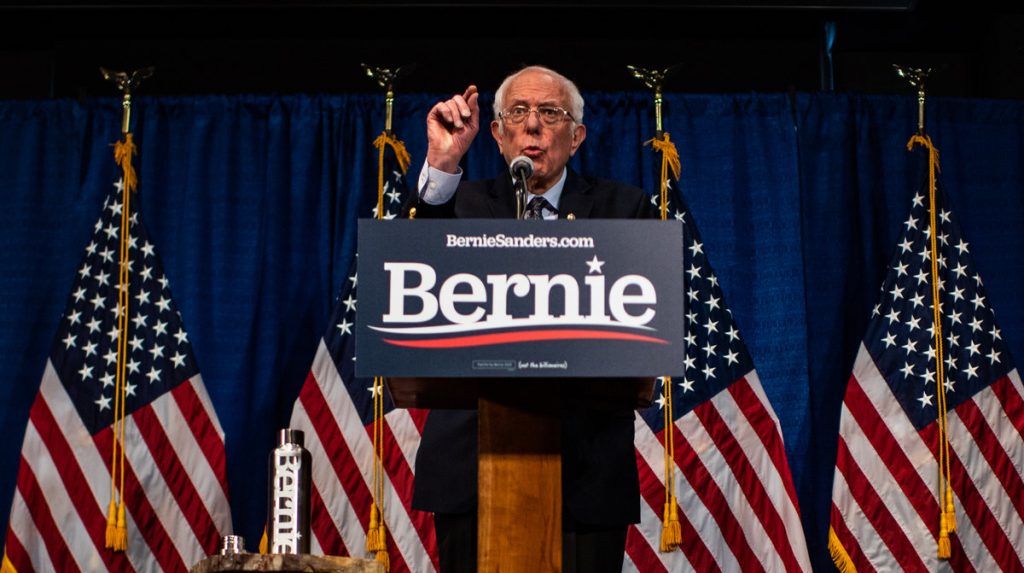 Sen. Bernie Sanders, the liberal insurgent who rose from relative obscurity to build a movement and become a two-time runner-up for the Democratic presidential nomination, is ending his 2020 campaign, clearing the way for former vice president Joe Biden to be the party’s choice to take on President Donald Trump in November.

The exit by Sanders, a 78-year-old self-identified democratic socialist from Vermont, marked the apparent close of a roller-coaster primary race that started more than a year ago. What began as the most diverse presidential field in history, featuring more than two dozen candidates, is finishing with the victory of an older white man whose prospects were written off not long ago.

Sanders’ departure presents Democrats with an immediate challenge: Can the party unify as it failed to in 2016, when a feud between supporters of Sanders and Hillary Clinton damaged its efforts to win the presidency?

Sanders’ decision closes one of the most remarkable chapters in modern political history. His advocacy for sweeping liberal ideas, such as Medicare-for-all and tuition-free public college, shifted the national debate over the role of government.

His unexpected success in the first three primary contests made him the best-performing independent contender in U.S. history, as well the strongest Jewish presidential candidate. At 78, Sanders was also the oldest candidate to go so far in the process.

But his campaign’s failure to capture the support of a majority of Democrats, on sharp display once the field narrowed to Sanders and Biden, underlined the limits of his left-leaning politics. A loss in the Michigan primary was especially damaging, undercutting Sanders’ message that he could expand the Democratic electorate by winning industrial areas.

Sanders also was unable to win widespread support in the African American community, a fatal problem in a party where black voters play a critical role.

Yet he has created a movement that could outlive his candidacy and be an influential force for years to come, given the passion of his supporters and their enthusiasm for his positions, even while the magnitude of his losses in states like South Carolina and Michigan raises questions about the scope of his support.

The backdrop against which Sanders is calling it quits amounts to one more twist in a topsy-turvy year, as the coronavirus pandemic had forced a suspension of in-person campaigning and rallies. It’s one more element of shock and uncertainty in a brief stretch of political history that has the most unorthodox presidency in memory, punctuated by an impeachment and Russian interference in U.S. elections.

Sanders vaulted onto the national scene in 2015 as a little-known candidate against Clinton, the overwhelming favorite for the Democratic presidential nod. While the senator from Vermont had spent decades in office, he had remained on the fringes of the political discourse, espousing ideas at the left end of the spectrum that often gained little traction.

But in 2016, Sanders caught a populist wave as the Democratic Party was shifting left and capitalized on Clinton’s unpopularity. He stunned many analysts by drawing huge crowds and winning 23 primaries and caucuses.

This time, many political operatives again wrote off Sanders given the Democrats’ strong field, especially after he suffered a heart attack in early October that forced him from the campaign trail for two weeks. But Sanders confounded expectations once again, recovering strongly, attracting support from influential young liberals like Rep. Alexandria Ocasio-Cortez (D-N.Y.) and accumulating more delegates than anyone but Biden.

Sanders also left a lasting legacy in terms of the way presidential candidates raise money. Starting with his 2016 campaign, he became an online fundraising behemoth, collecting tens of millions of dollars over the past two years, mostly in small increments from his passionate army of supporters.

For Sanders, the 2020 race was a turbulent ride of highs and lows.

He signaled his candidacy with a bang, releasing a video in February 2019 that went viral and raising $6 million in his first 24 hours. That silenced critics who predicted he would struggle to generate excitement in a crowded field with a different dynamic than he faced four years ago.

Just a week later, his campaign was in upheaval as the consultants who guided his 2016 campaign abruptly parted ways with Sanders after several strategic disagreements.

That was even before the campaign’s official kickoff, which came on a chilly March day in Brooklyn, where Sanders grew up. He unveiled a platform that closely resembled his 2016 agenda, focusing on universal health care, steep tax increases on the wealthy and forgiveness of student debt.

It quickly became clear that the tension between Sanders and the mainstream wing of the party had not faded since 2016. In April, he and his campaign aides stoked a public feud with the Center for American Progress, a Democratic think tank headed by a former top aide to Clinton. Sanders accused the group of using corporate donations to mount a “consistent effort to belittle or demean” him and undercut his policy ideas.

In July, the Sanders campaign’s internal disputes exploded into public view. The Washington Post reported that unionized field staffers on the campaign were battling management for higher wages, arguing that their compensation and treatment did not meet the standards Sanders espoused in his rhetoric. The field staff demanded an annual salary that they said would be equivalent to a $15-an-hour wage, which Sanders for years had said should be the federal minimum. The two sides reached a deal a few days later.

As fall arrived, Sanders struggled to keep his momentum, falling behind as Biden and Sen. Elizabeth Warren (D-Mass.) ascended. The campaign screeched to a halt on Oct. 1,when Sanders was rushed to a Las Vegas hospital after suffering chest pains during a grass-roots fundraising event. Doctors later placed two stents to open a blocked artery, and it was not immediately clear whether Sanders would be able to continue his campaign.

It was not until three days after his hospitalization, and shortly after his discharge, that Sanders’s campaign acknowledged he had suffered a heart attack.

Yet somehow the heart attack paved the way for Sanders’s political rebirth, albeit a temporary one. Shortly afterward, he received blockbuster endorsements from three of the four members of the “Squad,” young congresswomen of color including Ocasio-Cortez, who joined him at a “Bernie’s back” rally in Queens that drew a crowd of more than 25,000 people.

From there, his stock was on the rise. As Warren faded amid scrutiny of her positions on health care and her past work in the private sector, Sanders consolidated support on the left.

With his trademark irascibility and consistent focus on the same core issues, Sanders maintained a steady presence in the race as other candidates went up and down. His loyal backers gave him a floor of support. But as he later found, his polarizing politics also prevented him from growing his base beyond a plurality of the party.

In early February, Sanders fought former South Bend, Ind., mayor Pete Buttigieg to a virtual tie in the Iowa caucuses. He parlayed that success into wins in New Hampshire and Nevada, catapulting to the top of the national polls and securing his spot as the undisputed polling leader.

But instead of using his perch to strike a more inclusive tone, Sanders stoked fights with fellow Democrats, doubling down, for instance, on his praise of Fidel Castro, which offended many Florida voters.

Days before the crucial Super Tuesday contests on March 3, his fortunes turned dramatically. First, Sanders was blown out by Biden in South Carolina, the first concrete indicator that his struggles among African Americans could be fatal for his candidacy.

Then Buttigieg and Sen. Amy Klobuchar (D-Minn.) dropped out of the race and endorsed Biden, the starting gun for the mainstream faction of the Democratic Party to coalesce around the former vice president almost overnight.

The result was a brutal showing for Sanders on Super Tuesday. Biden won 10 of the 14 states that held primaries, including some where he had never campaigned or advertised. From there, Sanders was never able to recover.

Had he won the nomination, Sanders would have been the oldest person ever inaugurated as president – though Biden or Trump will assume that title if either takes the oath in January.

The 2016 campaign left lasting scars on Democrats, as many of Sanders’s followers believed that party leaders had unfairly worked to ensure Clinton’s nomination. That campaign also highlighted dramatic divisions over the party’s direction that persisted into the 2020 race.

Sanders was unable to fully capitalize on those divisions as he did four years ago. In the interim, Democrats had moved in his direction on various policies, and his once-singular calls for sweeping liberal ideas like Medicare-for-all and free college were diluted by similar proposals from other candidates.

Ultimately, Democrats chose Biden’s less-aggressive positions and rhetoric, believing they presented the best chance to defeat a president they revile.

Sanders has pledged to support Biden as the nominee, but questions remain about what his loyal supporters will do and how forcefully Sanders will urge them to back the former vice president. At rallies across the country over the past year, many Sanders supporters said in interviews that they would not be inclined to vote for the Democratic nominee if it wasn’t Sanders.

Democratic leaders hope this time will be different. In 2016, few believed that Trump could win, reducing pressure on Democrats to unify. And Sanders’s decision to end his campaign contrasts with his 2016 strategy of pressing on through the Democratic convention.

Although Sanders campaigned aggressively to activate new voters – particularly young people – who had not participated in politics in the past, his efforts fell short, exit polls and turnout figures showed.

Throughout his candidacy, Sanders’s message, while remaining revolutionary in scope, also varied. One week he was underscoring his electability. The next he focused on health care. Other times, he seemed content to reopen old battles with Democrats. He would sometimes talk about his biography, only to leave it out of his speeches for weeks. His confidants said it was hard to persuade him to listen to their advice.