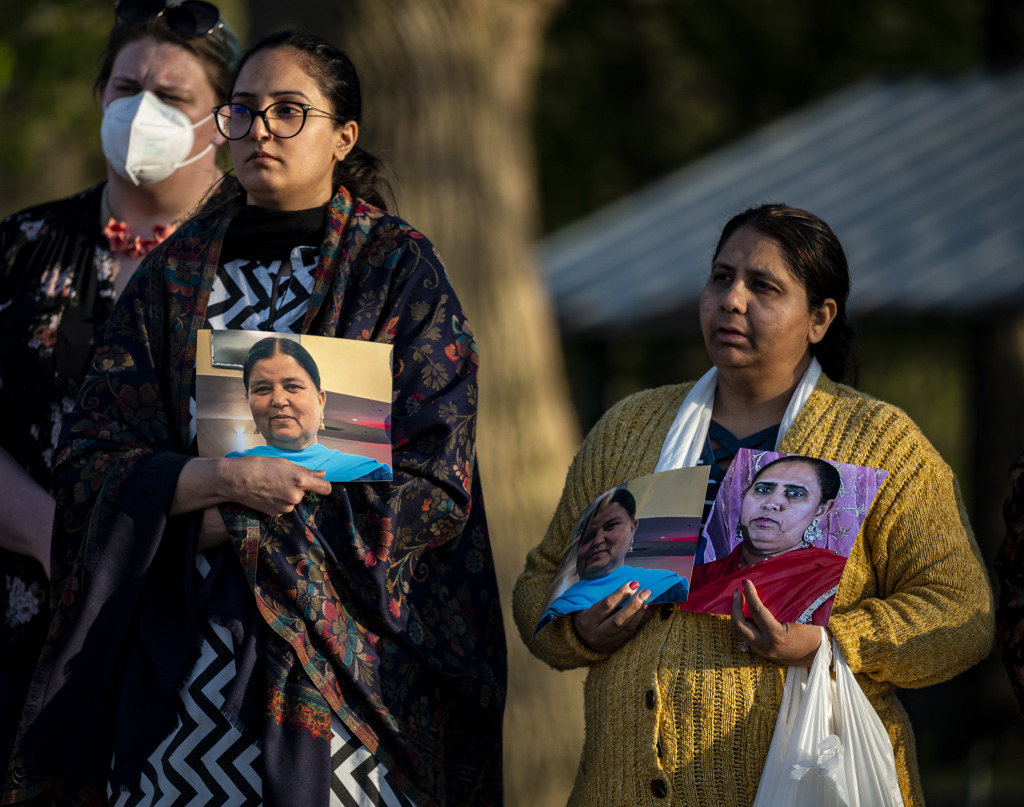 Dozens gathered for a vigil at Krannert Park on the city's west side to mourn the eight people killed in a mass shooting at a FedEx ground shipping facility on April 15. (IBJ photo/Mickey Shuey)

A Sikh civil rights organization called on law enforcement Tuesday to investigate whether a former FedEx employee who fatally shot eight people—four of them Sikhs—at a FedEx facility in Indianapolis last week had any ties to hate groups.

The Sikh Coalition’s request came a day after Indianapolis police released a report from last year stating that an officer who seized a shotgun from Brandon Scott Hole’s home after his arrest in March 2020 saw what he identified as white supremacist websites on Hole’s computer.

The coalition, which identifies itself as the largest Sikh civil rights organization in the United States, said it has sent letters to law enforcement and state and federal lawmakers “clearly expressing the continuing and urgent need to investigate the possibility of a bias motivation” in last Thursday’s mass shooting.

Hole was arrested last year at his family’s home after his mother told police her son might commit “suicide by cop.” A prosecutor said Monday that after his arrest, Hole never appeared before a judge under Indiana’s “red flag” law, which allows police or courts to seize guns from people who show warning signs of violence.

Hole, 19, used two rifles to kill eight FedEx workers and wound several others inside and outside the facility and then fatally shot himself before police entered the building, authorities have said.

A police report from Hole’s March 2020 arrest states that he became anxious while being handcuffed and asked his arresting officers to cut the power to his computer, saying, “I don’t want anyone to see what’s on it.” The report adds that while securing the shotgun, an officer saw “what through his training and experience” were white supremacist websites on the computer.

“A complete and thorough investigation—including determining the motives behind this attack and any connection Mr. Hole has to hate and white supremacy groups—is essential to providing justice and building trust between the Sikh community and local and federal law enforcement,” the Sikh Coalition’s legal director, Amrith Kaur, said in Tuesday’s statement.

Kaur added that the police report released Monday stood in “stark contrast” to a statement a day after the shooting from Paul Keenan, special agent in charge of the FBI’s Indianapolis field office. At that time, Keenan said the FBI had interviewed Hole after last year’s arrest, “based on items observed in the suspect’s bedroom at that time” by Indianapolis police. He did not say what items were found, but said agents who interviewed Hole in April 2020 found no evidence of a crime and did not identify Hole as espousing a racially motivated ideology.

On Tuesday, Keenan said that “no probable cause was found to initiate any type of legal federal process” against Hole, adding that, “The FBI takes great care to distinguish between constitutionally protected activities and illegal activities undertaken to further an ideological agenda.”

In response to the Sikh Coalition’s comments, he said that the FBI is “not ruling out any motive at this time, including one based on hate/bias.” He said the agency “will be meticulous and thorough in our investigation and devote as much time as needed to find answers for the victims’ families.”

Indianapolis police said in a news release Monday that FedEx fired Hole in October 2020 when he failed to return to work at a facility on the city’s southwest side. Indianapolis Police Chief Randal Taylor said Friday that 90% of the facility’s workers are members of the local Sikh community.

Last week’s shooting was the deadliest outbreak of violence collectively in the United States’ Sikh community since 2012, when a white supremacist burst into a Sikh temple in Wisconsin and shot 10 people, killing seven.