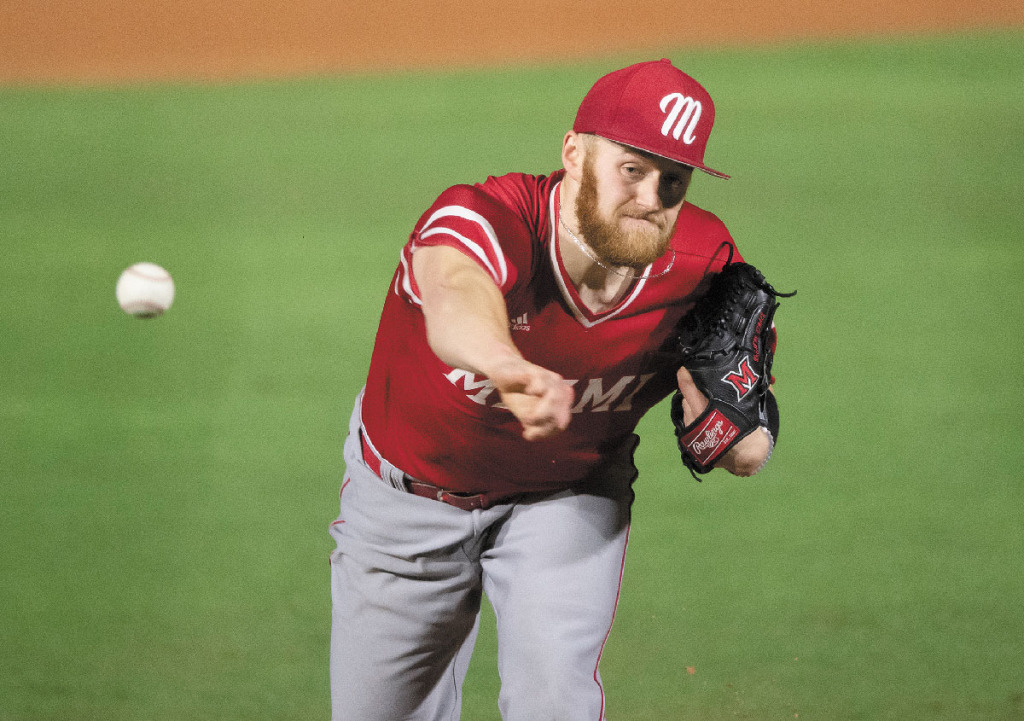 OXFORD, Ohio—The box seats behind home plate are crowded with baseball scouts jotting in notebooks and pointing radar guns, all here to see a Miami University junior righthander. His first pitch is 98 miles per hour, the scoreboard says. His third is listed at 104, and the Kent State hitter swings and misses through a vapor trail.

The 104 must be wrong. Nobody has a fastball like that, from here to Dodger Stadium. Still—obviously No. 18 out there is a hot prospect—Miami has never had a first-round pick in the 56-year history of the major league draft, but here’s the guy to change that come July.

Wait a second. Isn’t that Sam Bachman, class of 2018 at Hamilton Southeastern, where he was hardly noticed by colleges, scouts or all-state teams?

Yep. Here is a phenom few saw coming. “It’s one of those things where you look back and you just wish you could tell your old self there’s light at the end of the tunnel,” Bachman was saying before he took the mound to blow away a few more Mid-American Conference hitters. “It’s still so hard to believe, and that’s why I continue to work. Nothing’s earned yet.”

So, a lot has happened since those modest school years back in Fishers?

“Things got a lot more serious.”

To appreciate where Bachman is now, we should start with where he’s been.

“You look at freshman year in high school and where I was in baseball, it was just kind of a hobby, something to do. My friends all played it,” he said. “I never was the star. It was always watching other guys do it. I was part of the mix here and there, but I wasn’t consistent. I always had a chip on my shoulder. I was never the No. 1 guy and I always wanted to be there.”

That’s the way the woman in the gray Miami sweatshirt remembers it, too. Bachman’s mother, Suzanne, an Indiana University Health nurse practitioner, was sitting in the stands with eight other family members to watch her son pitch.

“Did I even think it would be anything like this? Absolutely not,” she said. “I don’t say that a lot to Sam because I don’t want him to think I didn’t have faith. Anytime you have a kid with a passion, you continue to feed it, and the longer we went, he was finding his way.”

Hamilton Southeastern had a losing record Bachman’s senior season. The Indiana High School Baseball Coaches Association named seven pitchers to its Class 4A all-state team in 2018. Bachman wasn’t one of them. Only two Division I schools—Miami and Lipscomb in Nashville—made offers.

But he was starting to show flashes in summer league, and, according to the Miami baseball guide, struck out 100 of 307 batters at Hamilton Southeastern. If anyone wanted to know how hard Sam Bachman could throw, all they had to do was ask the younger brother who had to catch for him in the back yard.

“He used to want me to throw with him, and I’d go inside crying because my hand would hurt,” said Gabe Bachman, now a Purdue freshman. “He threw me a curveball one time and it hit me in the ankle. That’s the last time I threw with him.”

One Bachman believer early on was Miami coach Danny Hayden.

“The first time I saw him, it was a no-brainer to try to get him to come to Miami,” Hayden said. “I remember watching him the first bullpen session he threw on campus. I was thinking, ‘You usually have to work a lot harder to get guys like this in the recruiting process. I’m glad he liked us. We’ve got something here.’”

Bachman had good freshman and sophomore seasons, then dropped his pitching release slot a tad; toned up his 6-1, 235-pound frame; developed a killer slider, and turned into a flame thrower. He hit 99.6 mph in fall baseball, which could technically be rounded up to 100. “You can’t count that,” he said. “I needed to see triple digits. I’m not going to do any 99-point something.”

That came in February in Miami against Florida International—100.8.

Suzanne wasn’t so sure. “As a mom, I thought, ‘Oh my God, your arm.’” For baseball scouts on the lookout for powerful arms, it was like ringing the dinner bell.

Now, there are a couple of things Bachman tries to avoid. One is looking at his pitching velocity on the scoreboard, except for when he has two strikes on a batter and lets one rip. “Maybe I’ll turn around and peek because I’m curious,” he said.

The other is paying too much attention to all those radar guns and eyes in the stands. “The first time it happens, you notice it,” he said. “But after a while, it’s not about them. They’re people watching; they’re just spectators at the end of the day. I really don’t see them anymore. I’m doing this for my team.”

Hayden isn’t sure how Bachman would have handled the scrutiny last year. This season, no problem. “Now, I think it lights him up. That’s part of the competition for him is seeing all those guns go up,” he said. “Sam has a laser focus on development, and then on the right day at the right time, a laser focus on competition. Then it’s full-on compete mode and he looks like a bad dude when he’s out there doing it.”

He pitches like one, too. He has struck out 54 batters in 33 innings and walked only nine. He’s given up five earned runs all season and opponents are hitting .131 against him. When he has a batter down 0-2 or 1-2, he said, one thought goes through his mind: “It’s over for you, kid.” And it usually is.

Still, Kent State found a way to beat him this day, bunting nine times. Bachman faced 27 batters, and the ball left the infield only twice. He struck out 11, and if you put the three hits he allowed end-to-end, they wouldn’t reach the centerfield wall. But he took his first loss, 4-1.

That bothers him because he is a lot more focused at the moment on giving 19-15 Miami a chance at the conference title than he is about any draft prospects. The scouts, the triple-digit heater, the future—all light years from graduation day at Hamilton Southeastern, and that was only three years ago. “I wouldn’t have believed anything close to this,” he said.

“Absolutely a dream,” Suzanne called all of it, remembering a young boy’s bedroom of baseball keepsakes and used water bottles.