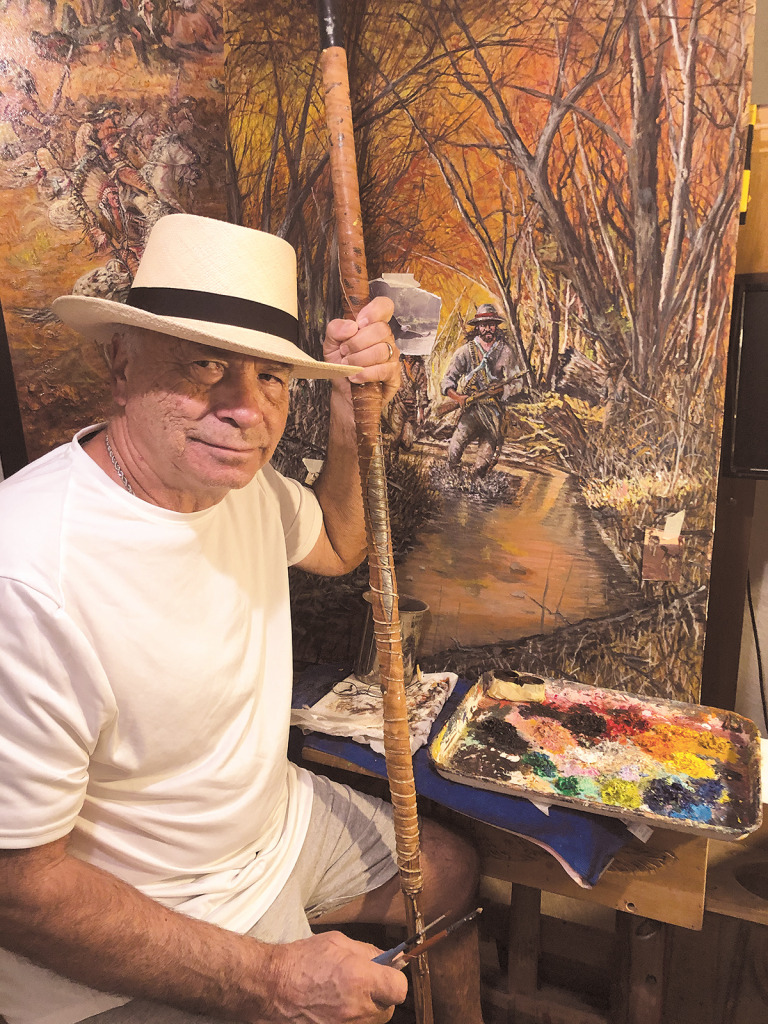 Native American artist and retired baseball player Gene Locklear says the Indians should keep their nickname, but use it as an educational tool. (Photo courtesy of Susan T. Locklear)

It seems an obvious nickname for a baseball team in Indianapolis, Indiana. A bit on the nose, even.

But now, not for the first time, it is controversial.

Nicknames related to Native Americans have been disappearing from the nation’s sporting landscape for about 50 years, with controversy ebbing and flowing along the way. It’s flowing now amid the current climate of social justice, and the waves have once again reached the shore of the city’s Triple-A baseball franchise, the Indians.

The Indians announced on July 28 they were forming a committee to review the use of the nickname and consider a change. Their official statement read in part, “We are committed to engage, listen and exchange ideas.”

A team spokesperson said the committee has since been formed but offered no information on its makeup or the status of its mission. Public opinion, meanwhile, does not appear to favor a change. Two-thirds of those who responded to an Indianapolis Star poll want “Indians” to remain the nickname. About 80% of those commenting on the franchise’s social media account agree. Those surveys are not scientific, however, and not necessarily proof of a majority opinion.

Before we get to the opinion of the person best qualified to speak on the issue, some background:

Indianapolis has had a professional baseball team since 1876, when a team called the Blues began play. The current franchise traces its ancestry to 1902, when the American Association was formed.

How it came to be nicknamed Indians is unclear. Newspaper articles in 1902 usually referred to the team without a handle of any sort, simply calling it “Indianapolis,” but occasionally went with Hoosiers or even Indianians. Indians as a nickname began appearing in articles in 1903 but only on rare occasions. It didn’t take hold well enough to appear in a headline until 1906.

There’s no record of franchise officials selecting the nickname or conducting a contest for fans to do so. It appears to have gradually emerged as a natural offshoot of the name of the city and state by popular consent. Or perhaps by the random consent of a sportswriter or two.

It was accepted without complaint until the late 1960s or early 1970s, when treatment of minorities became a bigger issue. As controversies over colleges and professional teams dropping nicknames such as Indians, Braves, Warriors and Redskins in favor of something more generic arose, the issue was occasionally brought to the desk of Max Schumacher, the franchise’s general manager from 1961-2016.

His response was that the franchise would consider a name change only if the city and state did the same. He still feels that way.

It’s a complex issue, though. One could argue the use of nicknames related to Native Americans is demeaning, promotes stereotypes and qualifies as cultural appropriation for financial gain. Someone else could claim it honors them for their spirit and courage, not unlike the choice of a fierce animal. Then again, putting a segment of the population in the same category as an animal kind of counteracts the argument. But then what about “Irish”? Is that also a degrading nickname? But then the Irish have not been victims of a mass genocide, as Native Americans have.

The debate could go on forever, and probably will. But Gene Locklear has a few things he’d like to say.

Locklear is believed to be the only full-blooded Native American to have played for the Indians. A member of the Lumbee tribe, he was a 22-year-old outfielder in the 1972 season when he won the American Association batting title with a .325 average. He would go on to play in five Major League seasons for Cincinnati, San Diego and the New York Yankees, then a season in Japan before retiring to focus on painting. Most of his artwork features Native Americans and can be viewed at www.genelocklear.com.

His most memorable painting as a member of the Indians was an elementary effort. He had been fined $50 by the team for getting kicked out of a game, so he offered to paint the teepee beyond the centerfield fence at Bush Stadium for that amount. Schumacher agreed and Locklear spent an afternoon applying a coat of paint provided by the Indians. He spruced it up by adding symbols of various Indian tribes. That night, he collected three hits in a 9-5 victory at Bush Stadium.

Locklear, who also played for the minor league Syracuse Chiefs, says he never felt degraded by Native American nicknames. In fact, his nickname among teammates during his playing career was “Chief” and he had “Chief Locklear” engraved on his bats.

“I felt proud to wear a uniform that had a Native American name and logo on it,” he says. “Think about how proud that made me feel. Being an Indian and playing for a team called the Indianapolis Indians, it can’t get no better than that.”

Locklear, in fact, believes teams with Native American nicknames should double down and take advantage of the opportunity they provide.

The Indians franchise hasn’t done that but has aligned with Indian culture to varying degrees at various times. Whether that was exploitive or reverential would be in the eye of the beholder.

They erected their first teepee at the start of the 1968 season. For a while that season, they had a mascot in Native American regalia perform, but that didn’t last long. The teepee, however, stood as a decorative element for many seasons.

Schumacher also recalls a fan, a Caucasian man named Pearce Relander, who was an admirer of Native American culture and by his own choice wore an Indian costume to games. He walked around Bush Stadium before the game and handed out Buffalo nickels to children, then took a seat and watched the game like any other ticket-buying fan.

More recently, the franchise has taken steps to distance itself from Native American references. It tried to move the teepee from Bush Stadium to Victory Field when it moved downtown in 1996 but it crumbled during the move and the idea was disbanded. That decision was made easier when it was learned that Native American tribes in Indiana lived in bark houses, not teepees.

Also, the team’s official mascot, Rowdie, was introduced as an Indian in 1993 but later was transformed into a bear in deference to prevailing sentiment.

Despite local public opinion, and despite Locklear’s approval, the changing tides might be working against the Indians’ 118-year-old nickname. The Syracuse franchise for which Locklear played might be forerunners, in fact.

They were the Chiefs, with various Indian logos from 1934 to 1996, at which point they become the SkyChiefs to move away from the Native American imagery. Their logo was changed to a train conductor in 2006 in another act of political distancing and the nickname was completely overhauled in 2018 when the New York Mets purchased the franchise and applied their moniker.

If the same thing were to happen to the Indians, they would become the Pirates, same as their Major League affiliate in Pittsburgh. In that case, would pirates be offended or honored?

Locklear, for one, would be offended by any change. Unless the Indians refuse to honor the human heritage of their nickname.

“If the Indianapolis Indians don’t recognize the Native Americans the way they should be, then get rid of it,” he says. “It’s not doing anybody any good. You might as well just name them the Indianapolis Whiteys.

“See what kind of response you get that way.”•