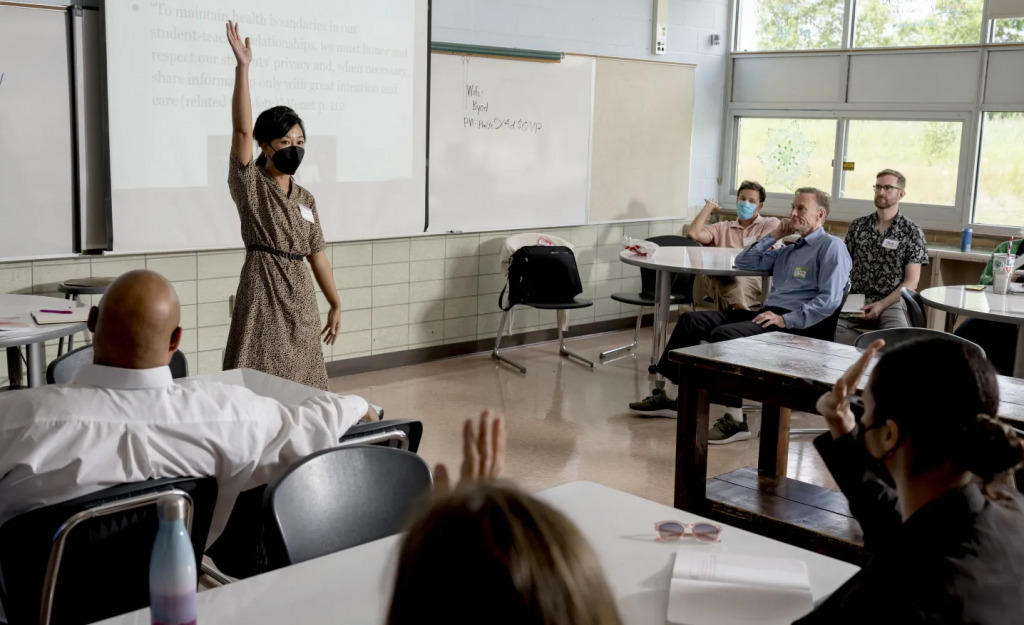 Recent staffing shortages have made it critical to recruit more candidates into the teacher pipeline, with states and schools dropping requirements like a license or degree in order to fill open positions. (Photo courtesy Nic Antaya for Chalkbeat)

Indiana’s ubiquitous teacher licensing exam could be one reason behind the state’s shortage of teachers — especially Black and Hispanic teachers, according to a new report from Indiana University.

The study found that Black and Hispanic prospective teachers scored up to 52 percentage points lower than their white peers on portions of the test, known as Praxis, further shrinking the pool of nonwhite educators that enter the profession even as the K-12 student population grows more diverse.

The traditional road to becoming a teacher has long held stumbling blocks for candidates of color. But recent staffing shortages have made it critical to recruit more candidates into the teacher pipeline, with states and schools dropping requirements like a license or degree in order to fill open positions.

The solution isn’t necessarily to get rid of Praxis and other tests like it, said Alexander Cuenca, author of the study and an associate professor at Indiana University, but to diversify the expert panels that determine passing scores for prospective educators, as well as offer more support for would-be test-takers.

“We know that more teachers of color in the classroom will improve outcomes for students of color and all students,” he said. “Licensure exams as a barrier to that are an under-examined issue.”

Praxis is divided into three sections — Praxis I, which tests basic skills; Praxis II, which tests teachers’ subject matter expertise; and a pedagogy component that tests classroom knowledge and management.

Due to a law passed in 2019, Indiana teacher candidates are no longer required to take the basic skills portion of the exam. Teachers still take the pedagogy exam and the subject matter test that correlates to the subject they want to teach.

Across all sections of the licensing exam over five years from 2016 to 2021, white candidates scored higher than Black and Hispanic candidates, the study found.

The disparity was especially significant in the content area sections of the exam. In one of the starkest examples, 52% of white candidates passed the mathematics subject area exam in the 2016-17 academic year, but no Black candidates did.

In some cases, the score gaps have gotten worse over time. In the English language arts content area exam, for example, Black candidates outperformed white candidates in 2016-17, with pass rates of 67% and 65%, respectively.

It’s not completely clear what led to that kind of score drop over the years, though Cuenca noted that Indiana switched testing vendors between 2016 and 2021, which can impact teacher prep programs and their students.

Scores tend to be higher overall and less disparate in the pedagogy section of the Praxis than the subject matter test — for the latter, teachers’ different educational backgrounds might contribute to gaps.

But there’s more to the differing scores than prospective teachers’ knowledge, according to the study, which points to how passing scores are determined.

Tests are scored on a scale, with each state setting its passing score. To determine those scores, the state and the testing company assemble panels of subject matter experts from schools and universities to determine which questions a new “just qualified” teacher should answer correctly.

The panelists participate on a voluntary basis, Cuenca said, and there’s little effort to ensure a demographic balance on each panel.

When Indiana undertook this process in 2020, 92% of the certified educators that participated in the panels identified as white, compared to 2% who identified as Black, according to the study.

As it happens, around 92% of Indiana’s 79,000 teachers are white, according to the Indiana Department of Education, compared to 66% of the state’s 1.1 million students. Hiring more underrepresented teachers has long been a policy priority for groups like the NAACP of Indianapolis, which highlighted the issue in its recent Black Academic Excellence plan.

Cuenca said the problem arises when panelists are asked to make subjective decisions about what new teachers should know — a judgment that varies depending on the panelists’ personal experiences.

A more diverse panel would have a richer discussion of this question than more homogenous panels, he said.

Educational Testing Service (ETS), the company behind the Praxis exam, has previously studied the effect of licensure examinations on the Black educator pipeline, according to the study. It reported in 2011 the existence of “very large score gaps between African American and White teacher candidates on selected Praxis I and selected Praxis II tests.”

In a statement, ETS said it is “committed to making our tests fair for all test takers to advance our mission of furthering quality and equity in education for every learner.”

“We work closely with our state clients to ensure that the panels of educators who contribute to the development of the Praxis tests, and the setting of its recommended passing scores, are representative of the test-taking population of the state with respect to race, gender, geography, and school setting,” the statement said. “We also encourage state decision-makers to solicit the diverse perspectives and opinions of all stakeholders when they set the state’s passing scores.”

The IU report said that while the issue has been long-acknowledged, few policy changes have come about as a result.

Cuenca does credit Indiana for removing the basic skills component of the test for would-be educators, alleviating some of the financial burden associated with the tests, especially for candidates who have to retake the tests.

His report says the most important solution to the issue is to require test vendors to diversify the score-setting panels associated with teacher licensing exams.

The current system creates a “closed loop,” which leads to fewer Black and Hispanic teachers in the classroom and eventually, on future score-setting panels which set the scores for the next generation of teachers.

However, Cuenca said he would strongly caution against getting rid of licensing tests altogether, especially as states deal with teacher shortages by removing other requirements for classroom teaching.

“Tests provide some public trust. There is a value from a public good perspective in having assurance on the knowledge, skills, and competencies of our professionals,” he said. “But we should think about how we can engage in that process better and in a more equitable way.”

Other states allow teacher candidates to demonstrate their subject matter expertise with their GPA from their content area, Cuenca noted.

Recruiting and retention efforts should have an eye toward creating support systems for Black and Hispanic candidates within their teacher prep programs, he said.

And the state could offer scholarships to teacher candidates who need to retake their exams. This would acknowledge that the repeated out-of-pocket financial costs and discouragement could lead them to choose another career path entirely.

“A century after this flawed system of teacher licensure was first implemented, policymakers should consider these recommendations, not only for the sake of individual teacher candidates, but to grow a more representative and effective teacher corps,” the study says.

Aleksandra Appleton covers Indiana education policy and writes about K-12 schools across the state. Contact her at aappleton@chalkbeat.org.