Marcus Ericsson, once a Formula One backmarker, is now an IndyCar frontrunner.

And an Indianapolis 500 champion.

Ericsson became the second Swede to win the Indy 500 on Sunday when he held off some of the biggest names in North American auto racing in front of the largest crowd of his life.

“It’s the biggest race in the world,” said Ericsson, who called it his biggest victory “by a million miles.”

The 31-year-old showed up in IndyCar something of a mystery in 2019 following five unremarkable seasons in Formula One. He’d worked his entire life to make it to the top level of motorsports then washed out winless — not even a single podium finish — over 97 starts.

He didn’t exactly dazzle in his first season in North America, either. Ericsson was cut loose from his first IndyCar team after just one year, then bought a seat at Chip Ganassi Racing — he made sure to note it when he said “winning the Indy 500, it’s not bad for a pay driver” — and has made steady strides in his 36 races with Ganassi since 2020.

“It’s been tough. I did five years in Formula One, almost a hundred grand prixs, running for small teams, towards the back most of it. You don’t get a lot of credit running in the back.

People think you are not very good,” Ericsson said. “I came over here, and people probably didn’t think much of that. I had to work my way here as well, learning American racing.

“Moved here, put my whole life into trying to become an IndyCar and mainly Indianapolis 500 champion. It’s been not easy. It feels good to show that hard works pay off.”

Ericsson took control of the race late — largely because of teammate Scott Dixon’s speeding penalty — and had the win in reach until a crash by Ganassi teammate Jimmie Johnson with four laps remaining brought out a rare red-flag stoppage at Indianapolis Motor Speedway.

IndyCar is among the purest forms of motorsports and rarely throws artificial cautions or issues stoppages that might change the outcome. But the crowd of more than 300,000 — only a few thousand shy of a sellout and the largest sporting event since the start of the pandemic — roared when IndyCar called the cars to pit road.

The stoppage gave Pato O’Ward and the rest of the challengers almost 12 minutes on pit road to strategize how to pass Ericsson. Ericsson was agonizing his own plans.

“Those 10 minutes sitting there in the pit lane during that red flag was some of the hardest 10 minutes of my life,” he said, “thinking what to do, thinking that I’m leading the biggest race in the world, and I’m that close to win it.”

There were two laps remaining when the race resumed and Ericsson got the jump on O’Ward.

The Mexican got one final look for the lead that Ericsson defended and O’Ward knew not to force the issue.

Sage Karam crashed and brought out another caution on the final lap, allowing Ericsson to coast to the victory podium under yellow. Karam was transported to a hospital for evaluation of muscular soreness.

“When that caution came out, I thought it was going to be another restart. I was like, ‘I can’t believe it, another one,'” Ericsson said. “First I was angry, then I just realized that won me the race. It’s an explosion of emotions from that point.” 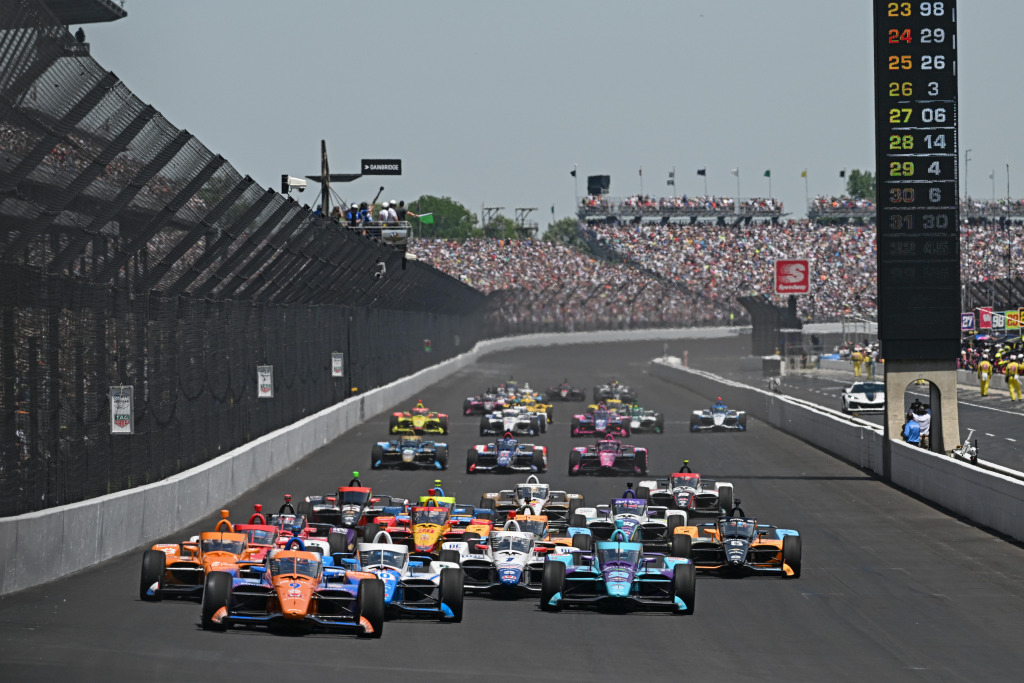 It is the fifth Indy 500 win for team owner Chip Ganassi, who caught a ride to the podium on the side of Ericsson’s car. Ericsson is the first Swede to win the Indy 500 since Kenny Brack in 1999 and the second in 106 runnings of the race.

Ericsson poured his jug of milk all over his face, then handed the bottle to Ganassi so the boss could take his own swig. Ganassi had not won the 500 in 10 years and sent five legitimate contenders to Indy to end the drought.

The win seemed to belong to Dixon, the six-time IndyCar champion who went more than 234 mph in qualifying to win the pole. The New Zealander led 95 of the 200 laps, and his Honda was easily the fastest in the field — so fast that Dixon didn’t slow down enough on his final pit stop.

The penalty took Dixon out of contention for the win.

That left Ericsson and Tony Kanaan still in the mix for Ganassi. Kanaan, at 47 the oldest driver in the field, thought he was in perfect position sitting fourth on the restart.

O’Ward wouldn’t relent, though. He signed a contract extension with Arrow McLaren SP on Friday and desperately wanted the win to celebrate his status as McLaren’s star. But O’Ward finished second, falling just short as he tried to give Mexico a banner celebration on the biggest day in motorsports; Sergio Perez opened Sunday with a win in the Monaco Grand Prix.

Kanaan was third, followed by Felix Rosenqvist, another Swede, who drives for McLaren.

Rosenqvist is in a contract year with McLaren and fighting for his job, but the McLaren group carried the Chevrolet banner at Indy as Juan Pablo Montoya finished 11th.

Dixon faded to 21st after the speeding penalty, and although he visited Ericsson on the victory podium, he was consoled by his wife on pit road after the race. Johnson finished 28th in his Indy 500 debut.

“It’s one team, everybody roots for everybody else, everybody works together and everybody is an open book,” Ganassi said. “You’re going to have things happen in these 500-mile races and they’re not always going to fall your way. So, you know, we were lucky to have five good cars and five good drivers.”