Home » Fast-growing Sweetgreen, ‘the Starbucks of salads,’ to debut in Indiana with north-side restaurant 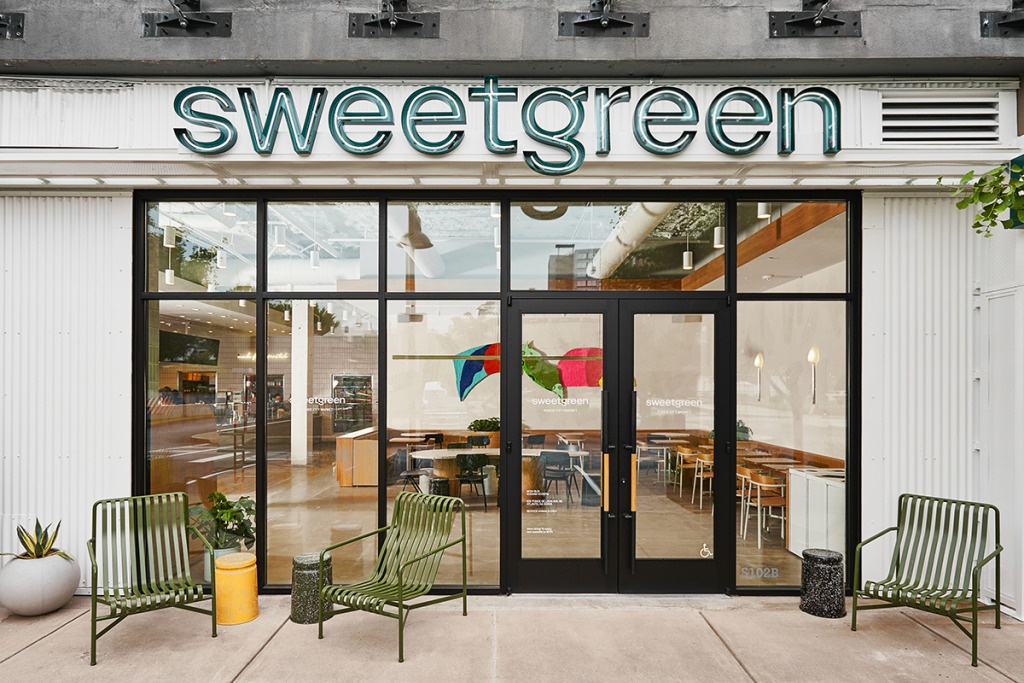 A Sweetgreen location in Atlanta. (Photo courtesy of Sweetgreen)

A national fast-casual salad chain that’s in expansion mode as it prepares to become a public company plans to open its first Indiana location next year at the Fashion Mall at Keystone—with a downtown location at least under consideration.

Los Angeles-based Sweetgreen currently counts 143 restaurants in 13 states and has announced its intentions to double that figure over the next five years. One of the three founders of the trendy, 14-year-old chain has referred to it as “the Starbucks of salads.”

It already maintains nine locations in the Chicago area, which led the chain to consider other Midwestern markets such as Indianapolis, Chief Operating Officer Chris Carr told IBJ last week.

“Based on what we know about the Keystone at the Crossing area, we thought that [the Fashion Mall] was a natural fit,” Carr said.

But company representatives declined to say where in the Fashion Mall the 2,500-square-foot restaurant would be located. They said it would open in 2022, without providing a more specific timeline.

A marketing manager for the high-end shopping center also declined to comment about Sweetgreen’s plans for its location.

On Oct. 26, Sweetgreen filed for its initial public offering, saying it would trade on the New York Stock Exchange trade under the symbol SG. Companies that file for IPOs typically enter a quiet period in which managers and marketing teams must speak sparingly about company operations.

Sweetgreen announced Tuesday morning that it intends to offer 12.5 million shares in its IPO, priced at $23 to $25 each.

Sweetgreen also wouldn’t comment on plans for other locations in the Indianapolis area, including its apparent interest in a new mixed-use development downtown.

A designer for Sweetgreen and an architect who does work for the firm filed a project construction design release application on Oct. 1 with the state of Indiana for a 3,063-square-foot Sweetgreen location that would be located at 157 New York St. in the $45 million Ardmore project. Approval from the state is required before applicants can file for local permits.

Ryan Gershman, principal of Indianapolis-based Gershman Partners, which developed the 123,000-square-foot residential and retail project, declined to comment on the prospects for Sweetgreen taking one of its vacant retail spots at street level.

Current retail tenants in the Ardmore include Rise’n Roll Bakery and Spectrum, with Shake Shack and Java House confirmed to open soon. Marketing materials for the development indicate there’s a “deal pending” for a space next to Shake Shack that’s approximately the same size as the 3,459-square-foot burger joint.

Sweetgreen has carved out a reputation for healthy food, including a wide variety of salads, bowls with proteins and veggies, and sides that lean heavily to farm-grown items such as cauliflower, tomatoes and potatoes. Its marketing also heavily emphasizes a “home-grown” ethos, championing local suppliers who supply fresh ingredients and integrating aspects of local culture into store design.

“We will have national and regional suppliers, but we go onto the market committed to supporting the small and mid-sized sustainable growers,” Carr told IBJ. “It’s all about availability and making sure food quality meets our standards.”

Sweetgreen’s IPO filing in October caused a bit of a stir when its financial records showed it has never turned an annual profit. Prior to the filings, Sweetgreen executives told the press that the company had become profitable.