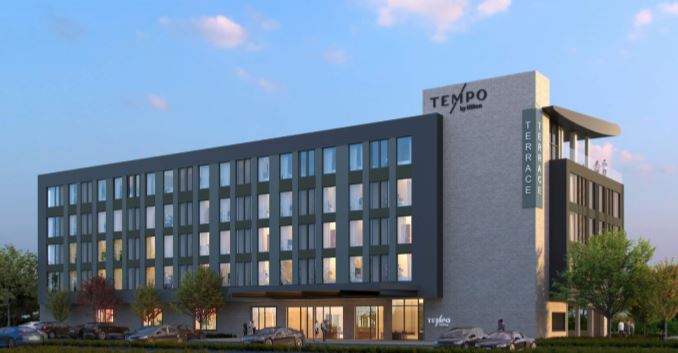 The five-story hotel would be built behind Kona Grill and open in spring 2024, according to a news release.

The hotel would be managed by Vince Dora of Dora Hospitality Group and developed by Carmel-based Equicor Hotel Group LLC.

Plans for the hotel have been submitted to the Carmel Plan Commission.

The hotel would be the first Tempo by Hilton in Indiana. The mid-priced Tempo brand, introduced in 2020, offers “Wellness Rooms” that include Peloton bikes and products from Therabody.

It is one of several redevelopment projects planned at Clay Terrace over the coming months, the news release said.

Clay Terrace, near U.S. 31 and East 146th St., is owned by Columbus, Ohio-based Washington Prime Group, which in March 2020 announced a major makeover of the outdoor shopping center.

Plans called for a hotel, apartments and office space at the 577,614-square-foot center.

Washington Prime Group is a real estate investment trust that was formed and gained ownership of the Clay Terrace lifestyle center in May 2014, after the company was spun off from Simon Property Group. It filed for Chapter 11 bankruptcy in June 2021.

Simon and Indianapolis-based Lauth Property Group co-developed Clay Terrace on 62 acres and opened it in 2004.

Dora has five other Hilton properties in its portfolio, including Hilton Garden Inns in Carmel and Fishers, a Home2 Suites by Hilton in Fishers and a Tru by Hilton in Indianapolis. A Tru by Hilton scheduled to open in Carmel in 2024 also will be managed by Dora.

Dora also has nearly 20 other hotels in its portfolio under the Marriott, IHG and Choice brands.