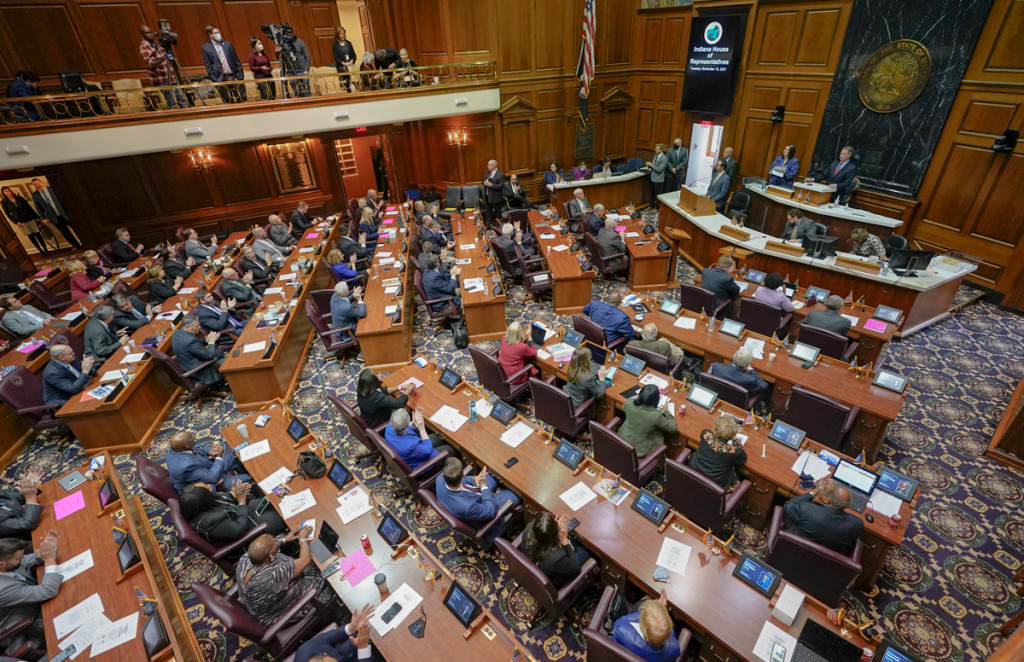 Dozens of bills are already advancing through committees and legislative chambers halfway through the third week of Indiana’s 2023 session.

The General Assembly’s focus is largely centered around the crafting of the state’s next two-year budget. Multiple bills relating to health care, education, fiscal policy and public safety are also top-of list for the Republican-dominated legislature.

The Indiana Capital Chronicle is following other bills, too. Here are some to keep an eye on as lawmakers continue their deliberations.

Township assessors in multiple Indiana counties could see their jobs nixed by voters under a bill passed out of the House 61-37 Monday.

The bill would require county election boards to place a public question on the November 2024 general election ballot asking whether the county should “discontinue paying for the cost of township assessors in the county.” All residents of the county — not just those in an affected township — would have a say.

Pressel maintained that the elimination of the single township assessor in LaPorte County could result in an annual savings of up to $250,000, but Democrats in the House pushed back against the bill. They emphasized that the cost savings for one county is not necessarily the same in others — especially those with thousands of parcels needing assessed.

Rep. Vernon Smith, D-Gary, noted that Lake County — which currently employs five township assessors — is geographically sparse. Eliminating the township offices would shift a substantial workload to the county assessor, he said. It would also create “difficulty” for residents needing to travel to the county office.

“I think the premise is flawed. Our citizens have already gone on record in Lake County saying that they want (the township assessors),” Smith said. “I think that we have to make some amendments to this bill so that we don’t end up not really feeling the pulse of the people — and how people are concerned about their township assessors.”

Lawmakers could carve out an exception in Indiana code to allow for the recreational use of throwing stars, which have been banned in Indiana since 1985.

Under current law, a person who manufactures, imports, sells, or possesses a “Chinese throwing star” commits a Class C misdemeanor, punishable by up to 60 days in jail.

A bill carried by Sen. Liz Brown, R-Fort Wayne, would legalize the recreational use of throwing stars at certain businesses, however, as long as there are safety precautions in place for throwing lanes and spectators. Brown said permitted activities would be similar to axe throwing.

The measure advanced 8-0 from the Senate Corrections Committee Tuesday.

Democrats questioned whether one portion of the bill should still be amended, however. They specifically pointed to a provision that allows minors as young as 12 years old to patronize a throwing star business without consent from a parent or guardian.

Committee chairman Sen. Aaron Freeman, R-Indianapolis, said the Senate GOP caucus would likely support an amendment to address that point next week when the bill is weighed by the full chamber.

Joel Wieneke, an attorney with the Indiana Public Defender Council, said the group supports the bill but recommended that lawmakers go one step further and delete the state provision concerning throwing stars altogether. He cited a lack of throwing star violations in the judicial system — since 2015, there have been 10 charges filed for that misdemeanor.

Wieneke also pointed to existing state statutes that provide appropriate penalties for individuals who endanger others while using a weapon.

County coroners could increase their pay and avoid certain autopsy costs under a bill that unanimously advanced from the House Public Policy Committee Tuesday.

A qualifying incident could include a car crash victim who wrecked in one county but died at a hospital in a neighboring county, for example.

The State 911 Board will study the feasibility of joining the various systems to allow emergency alerts to go to the nearest agency, regardless of county lines.

“People in emergency don’t care what the name is on the side of the apparatus,” Jokantas said. “They just want help.”

The bill heads to Appropriations for approval before heading to the full Senate.

A separate measure, authored by Sen. Jack Sandlin, R-Indianapolis, would remove residency requirements for 911 operators. Sandlin said the bill should help increase the number of employed operators at a time when 911 centers are “very” needed. The bill advanced from the Senate chamber in a 47-1 vote Monday.

A food and drink tax worth roughly $90 million a year could soon get an overhaul.

Lawmakers say Senate Bill 37 will foster transparency and ensure cities and counties are using funds properly, while some of those communities have resisted the changes and say they’re already accountable to taxpayers. It passed unanimously out of the Senate Tuesday and now goes to the House for consideration.

The bill would sunset every existing food and beverage tax without a built-in expiration date either in 2045 or when the debt tied to the tax is paid off.

It would also require governments with such a tax to give the Department of Local Government Finance a list of each unpaid bond or lease agreement by early May, and report tax revenue distributions and spending every year.

Sen. Gaskill, R-Pendleton, failed in a similar attempt last year, when the bill language was stripped out during conference committee — the last step in the lawmaking process. But it‘s back on track this year with the Senate approving it unanimously. It now moves to the House.

Sen. Liz Brown, R-Fort Wayne, said, “We have great philanthropic organizations in the state of Indiana. This ensures their donors have privacy protections. Some people like to remain anonymous when they make a donation.”

Democrat Sen. Greg Taylor, of Indianapolis, thanked her for offering a bill that protects all organizations equally regardless of political or personal ideology.

The bill now moves to the House for consideration.

Indiana Capital Chronicle is part of States Newsroom, a network of news bureaus supported by grants and a coalition of donors as a 501c(3) public charity.