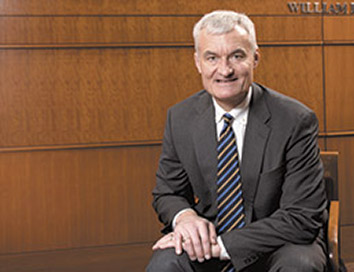 Tom Froehle, who has led one of largest law firms in Indianapolis through two mergers, will be stepping down next year as co-chair of Faegre Drinker Biddle & Reath LLP.

The firm announced Thursday that Froehle and his co-chair, Andrew Kassner, would be leaving their leadership posts April 1. Gina Kastel, a member of Faegre Drinker’s executive leadership team and board who is based in the firm’s Minneapolis office, has been selected by the board as the next chair.

“Gina’s outstanding leadership skills and experience demonstrates that she has been an invaluable servant leader at the firm, and we couldn’t be more pleased that she will be taking over as the next chair,” Froehle said in a written statement.

David Barrett, executive partner in Faegre Drinker’s Indianapolis office, is among those who have been asked to continue to serve on the firm’s executive leadership team. That group is responsible for implementing firmwide strategy and policy.

Froehle gave up a busy corporate and public finance practice to become the chief executive partner of Baker & Daniels in 2008.

Four years later, the firm merged with Minnesota-based Faegre & Benson to become Faegre Baker Daniels. Froehle was named chair and managing partner of the firm in 2016.

At the beginning of 2020, Faegre combined with Philadelphia-based Drinker Biddle & Reath, which created a firm of more than 1,300 attorneys, consultants and professionals in 22 locations across the United States, United Kingdom and China. It joined the ranks of the 50 largest law firms with a projected gross revenue of nearly $1 billion.

Froehle, former CEO of Drinker, and Kassner were named co-chairs of the merged firm.

Kastel credited Froehle and Kassner for their work in building Faegre Drinker.

“We are a stronger firm thanks to Andy and Tom’s leadership through the combination, and their remarkable work has led to Faegre Drinker’s early success,” Kastel said in written comments.

She served as Faegre Baker Daniels’ chief operating officer until 2020, and she helped guide Faegre’s combination with Drinker.

Kastel was selected to lead the firm following an extensive vetting process led by a board-appointed governance succession committee with the help of a nationally recognized outside consultant. As chair, she will focus on growing the firm’s client roster, strengthening client relationships and continuing to attract the best talent in the industry.

During the next several months, Kastel plans to visit the firm’s offices and listen to colleagues and clients.

“In collaboration with attorneys and business professionals across our offices, I plan to build on our foundation of exceptional clients, talent and culture, while leading efforts to continue innovating our services organization and the client experience,” Kastel said.