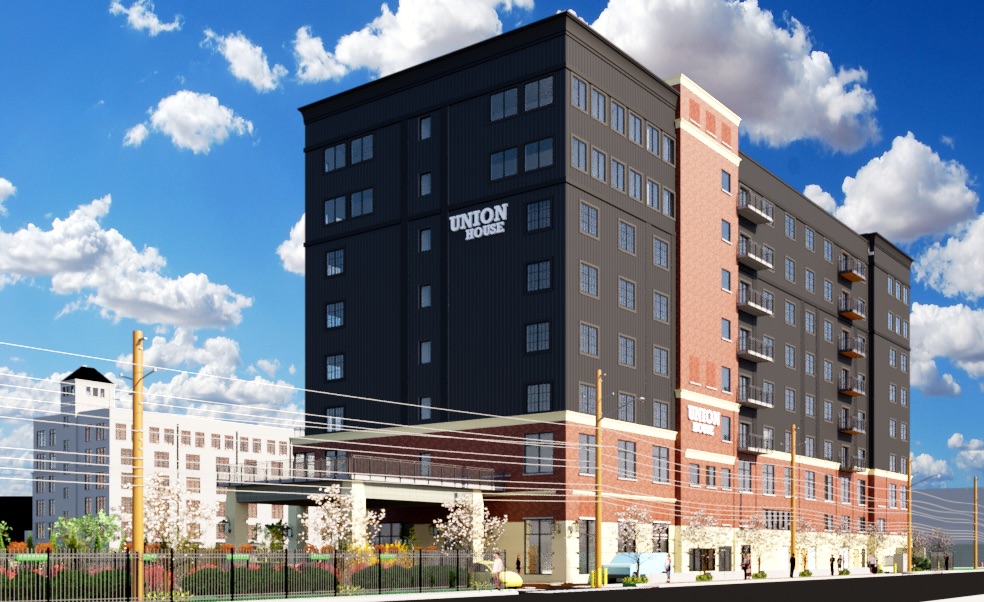 The investor group behind Union 525 is proposing another expansion to the tech incubator’s downtown Indianapolis corporate campus, this time with plans to construct a nine-story apartment building and a large parking garage on an nearby lot.

Union East LLC, a partnership of software firm SmartFile CEO John Hurley and several Indiana-based developers, is hoping to build the 160-unit multifamily building and 700-space parking garage at 108 E. McCarty St., southeast of the Union 525 building and west of the Eli Lilly and Co. campus.

The project, called Union House, would be bordered by McCarty Street on the south, Madison Avenue on the west, East Merrill Street to the north and South Pennsylvania Street to the east.

Steve Alexander, whose Indianapolis-based firm, Prince Alexander Architects, is the designer on the project, said most of the units will be “efficiency apartments,” which are smaller than traditional one- and two-bedroom units. They typically allow for customized leasing structures.

He said those types of apartments are beneficial for individuals and groups spending an extended period in Indianapolis or working at the Union campus but without the ability to commit to a typical six-month or year-long apartment lease.

“The thinking is that if a software company is moving here from San Francisco or a company has code writers that are coming in on a special assignment,” the Union House apartments can offer a “custom-design leasing sort of strategy,” Alexander said.

A unit breakdown for the apartments was not immediately available, but it is possible some of the units will also be available through traditional leases at market rate.

The first floor of the building would also include commercial retail space and bicycle storage space, a fitness center, a game room and a dog-washing area. An outdoor patio is planned for part of the ninth floor.

The apartment structure would sit on the northern portion of the site, with a 16-space surface lot between that building and the parking garage, which has been earmarked for the southern part of the site since 2017.

The 1.74-acre surface parking lot where Union House is expected to be constructed has been owned by the Union East partnership since late 2016.

The group is composed of Hurley, Lafayette developers John Teibel and Brad Teibel, and Schererville-based businessman Al Krygier. The partners collectively oversee more than 4 million square feet of office space around the state.

The oblong lot is partially across Madison Avenue from the Union 601 building now under construction. The building was approved by city of Indianapolis officials last year as the demand for more tech-focused workspace on the campus outgrows the former Brougher Building at 525 S. Meridian St.

Union 525, which is fully leased, houses 25 tech firms and more than 400 people across 122,000 square feet. The development team is spending about $10 million to build the six-story, 67,000-square-foot 601 building, which will be constructed from timber—similar to a new development planned in Broad Ripple.

Union typically offers short-term leases—ranging from one to three years—to allow tenants to adjust their space, as needed, in increments of about 5,000 square feet.

Alexander declined to provide a development cost for the Union House project, indicating funding mechanisms have not yet been finalized. Union East plans to use a combination of capital and construction loans for the apartment project.

The group is in talks with the city about securing tax-increment financing dollars for the parking structure, which would be mostly used by Union campus tenants and residents.

“We’ve been working closely with the city on assistance for financing for the garage,” Alexander said.

Taylor Schaffer, the city’s deputy chief of staff, confirmed the city has received a request for TIF dollars for the project and “is in conversations with the developer about next steps.”

Alexander said the investors hope to begin construction by the end of the year, working on both the apartments and the parking garage simultaneously.

The apartment portion of the project is expected to go before the city’s Regional City Hearing Examiner on June 11, with a zoning variance for the sky exposure plane going before the Board of Zoning Appeals on June 16. Approvals from both are required to move the project forward.