The Indiana House, above, and Senate will reconvene Jan. 6 for the 2020 session, during which smoking issues are expected to be debated. (TheStatehouseFile.com/Bryan Wells)

It might sound like a broken record: Business and health advocates will be at the Statehouse next month to again encourage lawmakers to raise the legal smoking age from 18 to 21.

For several years, bills to do just that have been filed and often given hearings, and proponents of making the change have argued it would improve the lives of Hoosiers.

Time and again, legislation to raise the age to possess or purchase tobacco to 21 has failed.

But that could be about to change. In the wake of a surge in teen vaping and new support from key leaders, so-called Tobacco 21 legislation is poised to pass during the 2020 session, which starts Jan. 6.

Gov. Eric Holcomb announced Dec. 10 that raising the age for smoking and vaping is “long overdue” and he made it a key part of his legislative agenda.

Republican leaders, including House Speaker Brian Bosma and Senate President Pro Tem Rodric Bray, say that their positions have changed and they are now open to passing legislation.

“It’s been said that it takes seven years for an idea to get through the Statehouse,” Bray said. “People are getting comfortable with it and deciding it’s an idea worth getting behind.”

Indiana Chamber of Commerce President Kevin Brinegar, who has lobbied for years to raise the age to 21, said that shift in position from key lawmakers is significant.

“We’re very optimistic,” Brinegar said. “It looks like the tide has turned.”

Republicans hold a supermajority in both chambers of the Indiana General Assembly. But the leadership support doesn’t make the bill a slam dunk.

Conservative lawmakers reticent to tell adults what they can and can’t do could still prove problematic.

“I’m interested to see if the 21 age increase for smoking and vaping is successful,” Bosma said. 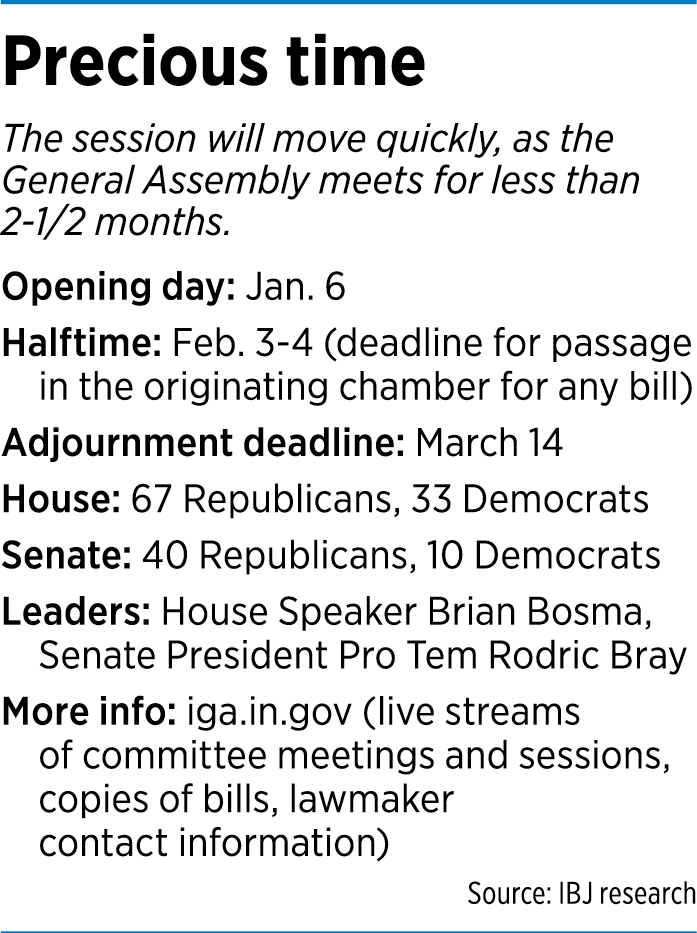 But even as support grows for raising the smoking age, lawmakers appear unlikely to address another proposal from health advocates—increasing the cigarette tax and imposing a tax on e-cigarettes and e-liquids. That issue is expected to be sidelined until 2021, when the state’s next two-year budget will be drafted.

“I think it’d be too aggressive of an issue to deal with in a short session,” said Republican Rep. Cindy Kirchhofer, who chairs the House Public Health Committee. “We just don’t have time to carefully assess what a tax would do, but I’m not saying I oppose it.”

Despite the time crunch, Holcomb said he’s looking at potentially backing an increase in the cigarette tax in 2021.

“We don’t want to leave any stone unturned,” he said.

Not the first try

Legislation to raise the smoking age has repeatedly seemed to have strong support in both chambers but still hit roadblocks.

In 2017, a bill authored by Kirchhofer, of Beech Grove, that would have barred Hoosiers younger than 21 from buying cigarettes and raised the per-pack tax unanimously passed the House Public Health Committee, but legislators stripped those provisions from the bill in the House Ways and Means Committee.

In 2018, a bill sponsored by former Rep. Charlie Brown, D-Gary, unanimously passed the same committee but was later killed by a procedural move.

And in 2019, a bill filed by former Sen. Randy Head, R-Logansport, passed the Senate Health and Provider Services Committee after no one testified in opposition. But after being sent to the Senate Committee on Tax and Fiscal Policy, it did not receive a hearing.

Also in 2019, a bill to increase the cigarette tax stalled, but legislation to impose a tax on vaping products almost survived. The e-cigarette tax bill ran into problems toward the end of the session as lawmakers couldn’t agree on the best way to structure the tax.

Proponents of both changes argue they are necessary to curb youth smoking and improve the overall health of Hoosiers.

Dr. Richard Feldman, director of medical education at Franciscan Health in Indianapolis, said national data has shown that raising the smoking age to 21 could decrease the smoking rate 12% and decrease smoking-related deaths 10%.

Advocates say it’s important to cut off youth access to tobacco products because 95% of smokers say they started before age 21. “We’re going to have a lot less smokers and a lot less death later on if we increase” the age, Feldman said.

Kirchhofer said she plans to file legislation again to raise the smoking age to 21 and has heard from other lawmakers who are doing the same.

“It’s on the forefront of many minds,” she said.

Proponents might have vaping to thank for some of the new support.

The significant nationwide rise in vaping, especially among youth, is blamed for increasing numbers of serious lung injuries. In Indiana, four deaths have been linked to vaping so far and 55 vaping-related lung injuries have been confirmed.

“That scared and got the attention of policymakers,” Brinegar said.

“I think it has been a catalyst to move legislators to try to do something,” Feldman said. “People are afraid that we’re going to lead this new generation into a lifelong addiction.”

House Speaker-elect Todd Huston, R-Fishers, said hearing from constituents and his teenage kids about vaping in schools helped him reconsider raising the age.

Now he supports the idea.

“I think it makes sense,” Huston said. “I’ve seen the impact of smoking and vaping at that age.”

Bosma said he’s also been swayed by military support for the change. One argument for keeping the smoking age at 21 has been that anyone old enough to enlist in the U.S. military and die for his or her country should be allowed to smoke.

But retired U.S. Army Brig. Gen. Jim Bauerle, who serves as vice chairman for The Military/Veterans Coalition of Indiana, has testified since 2017 on proposed bills to raise the smoking age to clarify the military’s position.

“The military has always been very supportive of what we can do to eliminate this problem,” Bauerle said.

Recruits are not allowed to smoke at basic training, for example.

Brinegar said the chamber is working to ensure more lawmakers know about the National Guard’s position. “We’re gradually trying to get the word out.”

The second prong of the anti-smoking fight—increasing taxes—will likely be pushed to 2021 since Republican leaders say they don’t want to address any measures in 2020 that would reopen the 2020-2021 budget passed this spring.

Efforts to increase the cigarette tax in recent years have failed to garner enough support, and legislation that would have created a tax on vaping products died in the final hours of the 2019 session.

E-cigarettes and e-liquids are not currently taxed in Indiana; cigarettes are taxed at $1 per pack.

Feldman said addressing the age instead of the tax is “a lot easier” for lawmakers.

“It’s the safest thing for them to do legislatively and politically,” he said.

Brinegar said the chamber still plans to lobby for the taxes this year, even though the odds aren’t good.

“The sooner they do it, the sooner we’re going to have an impact,” he said.•