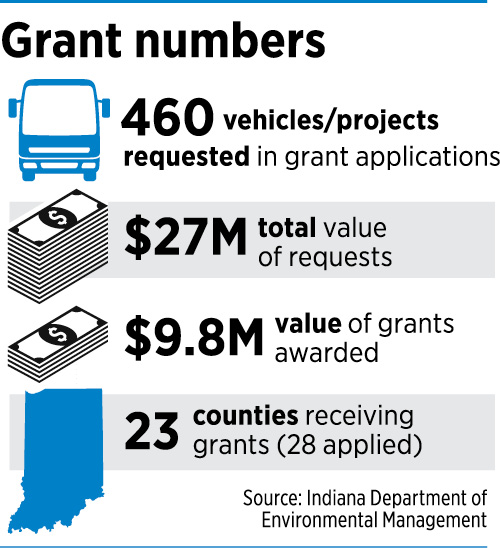 Carmel Clay Schools has 165 to 170 buses on the road every day, and soon it will take a first, small step toward making that fleet more efficient. It’s buying an electric bus, thanks to the 2016 settlement of the federal class-action lawsuit against Volkswagen.

Indiana is receiving $41 million—in three disbursements—from the $2.9 billion portion of the settlement dedicated to funding projects that reduce diesel emissions. The German carmaker agreed to a total fine of $14.7 billion after it was caught cheating on emissions tests and violating the Clean Air Act.

The first round of Indiana’s grants has just been awarded.

Carmel Clay Schools is one of four school districts that will be receiving funding for an electric bus and one of 34 initial grantees recently approved by the Indiana Volkswagen Environmental Mitigation Trust Fund Committee and the Indiana Department of Environmental Management, which Gov. Eric Holcomb tasked with overseeing the fund.

The recipients include school districts, local governments and businesses spread throughout 23 counties.

Janet McCabe, assistant director for policy and implementation at IU’s Environmental Resilience Institute, said it’s “hugely significant” that Indiana received $41 million that it can use to make strides in environmental efficiency.

“The state is just not going to get a pot of money like this,” said McCabe, who is also a senior law fellow at the Environmental Law & Policy Center. “It just doesn’t happen.”

But there is some concern that too many Indiana recipients are spending the grant money on diesel vehicles (although newer diesel models release fewer emissions than older ones) instead of electric options.

IDEM and committee members held public meetings and gathered input through 2018 to determine how to allocate the funds. Applications for the first round of grants were due in June and awards were announced in July.

The state received more than 60 applications requesting $27 million for 460 vehicles and engines. Awards were capped at $800,000 per recipient, and every recipient must match part of the grant. The $9.8 million in grants will result in $31 million spent on 179 fuel-efficient vehicles and equipment projects.

“We were very pleased with the response,” said Shawn Seals, who works in IDEM’s Office of Air Quality and is manager of the Volkswagen trust fund. “When you get three times what’s available in the ask, that’s a pretty well-received program.”

School districts haven’t bought electric buses on their own yet because they cost about four times as much as a traditional bus—about $100,000 versus $400,000.

“It is forward-thinking,” said Brett Boezeman, director of facilities for Bartholomew Consolidated School District. “There’s nothing like this in the state.”

Still, grant recipients and environmental experts acknowledge that the impact of one electric bus or clean diesel truck is minimal, at least at first.

“On its own, it’s not significant,” Carmel Clay Schools Transportation Director Ron Farrand said. “Our thinking is, every little bit helps. We have 24 propane buses in operation. When you start combining all that, one more bus does make a difference.”

The largest chunk of the first round of funding—$3.7 million—went toward diesel vehicles, which some environmental advocates say shouldn’t have been the priority.

A report released in May by the U.S. Public Interest Research Group graded states on their priorities for the trust fund dollars. States were penalized for allowing more than 15% of the funding to support diesel vehicles and rewarded for emphasizing funding electric vehicles.

“Although technically allowable under the settlement, for states to spend this money on outdated diesel or other fossil fuel technology would be a wasted opportunity,” the report said. “The Volkswagen settlement money presents states with a unique chance to accelerate transportation electrification, and this money should be spent towards that goal.”

Indiana received a D grade in the report, but it was not alone. Only seven states received a B or better.

The USPIRG recommended states spend 85% on all-electric transit and school buses and the remaining 15% on electric vehicle infrastructure.

Seals said Indiana does plan to use 15%—or $6 million—for electric vehicle infrastructure. A request for proposals for that part of the funding should be released next May, he said.

McCabe said she would have preferred a greater emphasis on electric vehicles, because they have the biggest impact in reducing emissions.

And she said the more schools that can switch to electric buses, the cheaper the prices will become.

“Those first few school buses, they’re going to make a difference for those kids,” McCabe said. “People need to get used to things, see the benefit of them little by little by little … . I admire these school districts that say, ‘Yeah, we want to be out there doing that.’”

“I was hoping for a much larger percentage of the funds [to] go toward alternative fuels that would make a transformative difference,” Beranek said.

Affordable diesel vehicles already exist, he said, so those purchases don’t necessarily need a government subsidy. Instead, the Volkswagen money should be used to offset the cost of trying something new, like electric or hydrogen-powered vehicles.

The committee’s chairwoman, former Republican state Sen. Beverly Gard, also expressed concerns about the amount of diesel vehicle funding included in the first round, but said she understood the argument that a new diesel vehicle still releases far fewer emissions than an older one.

She said she hopes the next round of funding has less of a focus on diesel.

“We’re trying to get away from diesel,” Gard said. “That’s still something that gives me pause.”

IDEM scored the applications and presented recommendations to the committee for approval in July.

Seals said IDEM was open to diesel vehicles, because the dollars can go further given that diesels are cheaper than electric vehicles, and the support infrastructure needed for electric vehicles can be difficult for some applicants to invest in.

McCabe said diesel vehicles are cheaper in the short run, but electric vehicles can be more cost-effective and better for the environment in the long run.

According to the USPIRG, 5.3 million tons of greenhouse gas emissions could be eliminated if all U.S. school buses were replaced with electric buses. Replacing all diesel-fueled transit buses with electric alternatives would eliminate another 2 million tons of emissions. Each electric school bus could also save a district $2,000 per year in fuel and $4,400 per year in maintenance costs.

“I really hope that IDEM takes this opportunity to build on this experience,” McCabe said. “This is a long game that we’re looking at.”•