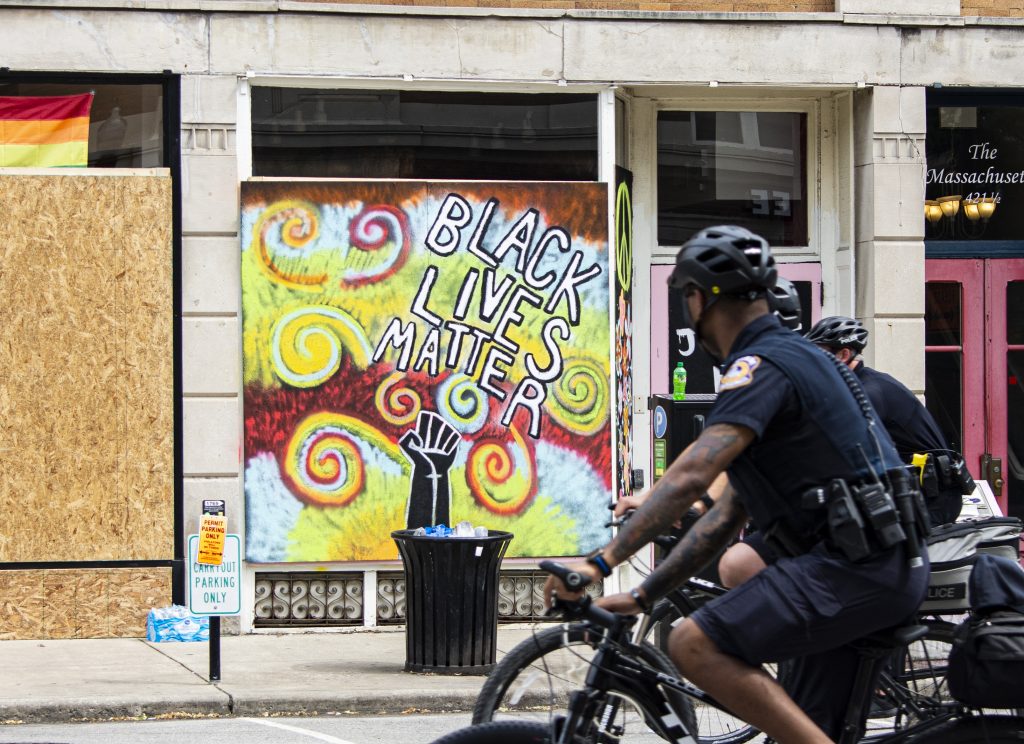 In the aftermath of weekend looting and vandalism, some downtown Indianapolis businesses are turning their plywood window coverings into works of art or messages of support for peaceful protesters.

Several restaurants and retailers covered their storefronts after protests over racial inequality and law enforcement’s treatment of African Americans boiled over into rioting and destruction—causing millions of dollars in property damage to more than 100 businesses.

Most of downtown’s ground-level facades are covered by large plywood boards, which business owners erected to patch up damage or prevent additional harm. Several businesses have enlisted their staffs and local artists to paint murals on the boards that display unity or perseverance.

Over the weekend, Kohn led her staff in adorning the store’s plywood coverings with the names of African Americans who have been killed by law enforcement.

“All of it comes back to these people who unjustly lost their lives,” she said.

Protests have been a nearly daily occurrence in Indianapolis and other cities since May 26, after the death of Minnesota man George Floyd in police custody on May 24 and other deadly encounters between black individuals and law enforcement, such as the Indianapolis Metropolitan Police Department’s shooting of Dreasjon Reed in early May.

Protests in Indianapolis have been generally peaceful since Monday, after a weekend that saw police use tear gas and other dispersion methods on large crowds. The pandemonium included dozens of arrests and two deaths, in addition to the property damage.

Silver in the City is one of at least three businesses in the 400 block of Mass Ave to decorate its plywood. Its artwork features names like Floyd, Michael Brown, Tamir Rice and Breonna Taylor—all African Americans who died during interactions with law enforcement.

“We want these names, this artwork, to speak for themselves,” Kohn said.

Across the road, two paintings are visible: One at the Flying Cupcake Bakery expressing solidarity with the Black Lives Matter movement and another at the Artisans gift shop, where several artists painted a mural depicting a flower stemming from a crack in a sidewalk.

“We were asked to come down and do a mural, and we wanted to do something with the theme of hope. So, the flower growing through the cracks in the sidewalk is our symbol of that,” said John Kane. “Hopefully people will come by and they’ll stop and look a little more closely, and think about how they feel.”

The mural is also meant as an indirect tribute to Cathedral graduate Chris Beaty, who was shot to death amid the riots on Saturday night, just a few blocks from Artisans.

“There’s nothing angry about our message,” Kane said. “It’s about something beautiful growing out of something that’s kind of overlooked—like the cracks in the sidewalk.”

Nearby, on the north side of an apartment building at 333 N Pennsylvania St. (directly across East Vermont Street from where Beaty was killed), other artists painted a mural honoring Beaty, who played football for Indiana University. The artwork includes space for people to write messages remembering the man, along with an array of sports and personal memorabilia.

Outside of Mass Ave, several other downtown businesses have taken the temporary plywood coverings as an opportunity to show their creative side as well.

Downtown Comics, 11 E. Market St., put out a call Monday for artists to decorate its boards, encouraging “budding artists to make it comicy and fun,” in hopes of catching eyes and making people “think twice about before defacing it with graffiti.” Several local artists contributed to the ad-lib mural.

Other businesses are taking a different approach with their artwork choices. Soupremacy, 7 E. Market St., has a heart on its plywood window covering, with “Indy” written inside it and the word “Open” in a script shape above.

Indianapolis resident Ty Green, who was on Mass Ave with his family Wednesday afternoon, said he is happy to see artwork going up on the plywood—and messages supporting racial equality.

“Art is a form of expression,” he said. “I think it’s genius that they’re doing this.”

The Arts Council of Indianapolis on Friday said it has partnered with St’ArtUp 317 and local cultural organization Pattern to support businesses that ask local black artists to decorate their plywood facades, specifically for artwork supportive of the issues raised by the Black Lives Matter movement in recent weeks.

The organizations said they can to provide stipend payments of $250 to $500 for 10 to 15 artists and encouraged businesses to provide additional funds, when possible. The entities also hope to curate the artwork when it is removed from the buildings for later display in public spaces.