In many ways, Franklin College operates in the shadows of much bigger institutions around the state.

Its undergraduate enrollment (894 students) is a fraction of that of Purdue (about 40,000) or Indiana University (90,000). It has a small faculty, a 200-acre campus and a quiet, suburban setting in Johnson County.

But as far as Franklin College President Thomas J. Minar is concerned, the science program is just as critical to Indiana’s $63 billion life-sciences economy as the larger research institutions.

“We’re not at the scale of Purdue or IU, obviously,” he said. “But Purdue and IU can’t do it all. There are certain students who don’t belong in those huge educational settings. We feel we have a real role to play in educating a certain kind of student.”

Franklin College has turned out thousands of graduates over the decades who have made a name in Indiana’s science community, including doctors, researchers, biotech entrepreneurs and hospital executives. 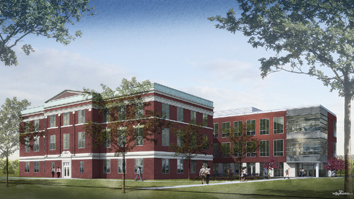 They include Theressa Wright, head of global patient safety in Eli Lilly and Co.’s cardiology department; Derek Small, CEO of Assembly Biosciences in Carmel, which is developing drugs for gastrointestinal diseases; Tom Roberts, vice president of quality assurance at Cook Medical in Bloomington; and Dave Dunkel, chief of staff at Johnson Memorial Hospital.

Now, the college is about to renovate its science labs to emphasize student research and make the sciences more inviting to non-science students.

On May 18 at 5:30 p.m., the college will have a groundbreaking ceremony to upgrade and expand its science center. The project involves gutting and modernizing Barnes Hall and building an additional wing, with a courtyard between them

“It’s a beautiful old Georgian red-brick building,” Minar said. “But I wouldn’t call it state of the art for 2017.”

When the project is completed, the space in the science center will grow by 70 percent to 51,000 square feet. The number of labs will grow from 10 to 12, and total lab space, including three research labs, will nearly double, to 15,917 square feet.

The price tag on the project is $18 million, which is a bit less ambitious than the original plan to spend $25 million.

Minar said the school has raised almost $9 million, and is also issuing bonds to pay for the science center, as well as pay off some old debt.

The groundbreaking ceremony will take place behind Barnes Hall on Monroe Street. The public is invited to attend.

Meanwhile, the college has updated its science curriculum to emphasize more student-driven research. The college has 14 full-time science faculty members.

“A lot of this isn’t just the popular drive you’ve seen nationally in the last 20 years talking about STEM education, which of course is one of the great cliches now in any conversation about education,” Minar said. “But rather it’s a recognition of the role we want to keep playing in the vivacious life science economy in Indiana.”