Neighbors of the former Sunrise Golf Club property along the Monon Greenway in Carmel aren’t sold on a redevelopment plan that calls for building 149 custom homes and up to 265 apartments on the 78-acre site. 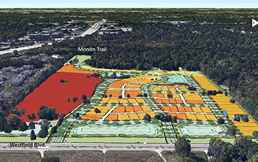 Developers are planning 149 single-family homes and up to 265 apartments (multifamily area in red) for the former Sunrise Golf Club in Monon.(Rendering courtesy of Sunrise on the Monon LLC)

Nearby residents told the Carmel Clay Plan Commission this week that they are concerned about the proposed density and its likely impact on traffic along two-lane Westfield Boulevard.

Property owners in The Retreat apartments and condominiums just south of the former nine-hole golf course circulated a petition opposing the project, citing those concerns and the fact that the multifamily housing will be rented, rather than offered for sale.

The Plan Commission heard from more than a dozen critics and posed questions of its own before assigning the Sunrise on the Monon rezoning request to its subdivision committee for further review.

As IBJ reported in May, Carmel-based Old Town Development LLC acquired the land from the Vera Hinshaw Family Limited Partnership. It had been in the Hinshaw family for more than a century.

Sunrise on the Monon is being designed with empty nesters in mind. Old Town plans to offer a variety of housing options ranging from seven-figure custom homes built on the tree-lined golf greens to single-level apartments with attached garages.

The developer has identified about 18 acres on the south end of the property for the apartments, but it’s still working on a site plan for the four-, eight- and 12-unit buildings and related amenities.

Old Town Principal Justin Moffett addressed neighbors’ concerns about the project’s aesthetics by assuring them the apartments won’t be an eyesore—after all, he’ll be selling custom-home lots in the same area.

“We saw a void in the market—apartments appealing to the older demographic,” he said, citing the main-floor living, private parking and “significant outdoor living spaces”  Sunrise plans to offer its renters.

Most other multifamily projects in the construction pipeline are geared to young professionals, Moffett said.

As for traffic, he said the 16,000-vehicle daily count on Westfield Boulevard is expected to drop by about 6,000 when construction on U.S. 31 is complete late next year. Sunrise likely wouldn’t ready for residents until the summer of 2016.

The multifamily component is a “critical part of the development,” Old Town’s Matt Griffin told the Plan Commission before a public hearing Tuesday.

With the apartments, the total density of the project would be about 5.5 housing units per acre, city planning administrator Rachel Keesling told the commission. She said Sunrise would be a good fit for the site, providing a transition from single-family neighborhoods to the north (about 2.2 units per acre) to the multifamily Retreat to the south (about 6.4 units per acre).

Old Town also plans to preserve most of the trees on the site; more than 20 percent of the property is expected to remain green space, including a “gateway plaza” with Monon access. It’s slated to be part of the four-acre Vera J. Hinshaw Park, which will be donated to Carmel Clay Parks & Recreation.

The developer has plenty on its plate. In addition to building “pocket” neighborhoods in Carmel’s Arts & Design District, Old Town also is working on the 40-home Gray Oaks neighborhood near 146th Street and Gray Road.

And this week, Moffett joined Carmel Mayor Jim Brainard in announcing plans for a $150 million redevelopment project in the so-called Midtown area between Carmel City Center and Main Street.