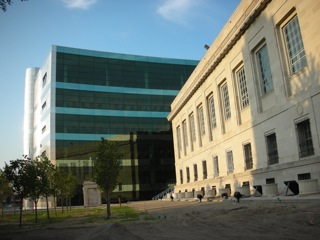 It’s been quite an ordeal, but the Central Library expansion is almost complete. The Interim Central Library, which opened in Old City Hall after construction began on the expanded facility in 2002, is scheduled to close on Sept. 8. The Library says it will take 6 weeks to move more than 700,000 volumes. A grand re-opening is planned for the end of 2007. Was the new building worth the wait?