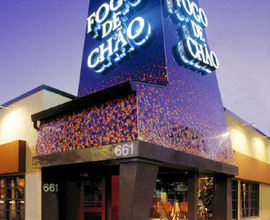 A few nuggets to break up an otherwise slow day for real estate news:


All-You-Can-Eat Meat: The deal is done to bring the upscale Brazilian Steakhouse Fogo de ChÃ£o (fo-go dÃ¨e shoun, or fire on the ground) to the former Zipper Building downtown. The chain has 10 locations in the U.S. (Chicago restaurant shown here) and five in Brazil. Diners use a disk with one side green and the other red to show whether they want servers to continue bringing skewers of meat.


Open Road: The owner of Indy Saab plans to open a 5,000-square-foot BMW motorcycle repair shop at 2416 W. 16th St., near Lafayette Road. The new facility will be next door to the Indy Saab dealership.


Noodle News: It’s official: You’ll still be able to get noodles near IUPUI. Noodles & Co. has filed plans to take the former Nothing But Noodles space at 903 Indiana Ave. This confirms the fine reporting of a couple of blog readers. (Thanks, folks.)


Tipping the Scales: Indianapolis Scale Company has filed plans to build a new, 12,000-square-foot headquarters in Camby’s Heartland Crossing. The company plans to move from its current home at 7302 Kentucky Ave.