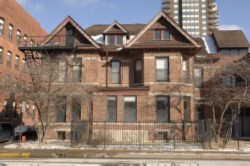 The Salvation Army has won approval to demolish an historic home it owns next door to its office at 540 N. Alabama St. after Indiana Landmarks could not find another user willing to invest in the property. The Queen Anne-style structure at 234 E. Michigan St., which was built before 1898 as a single-family home, has been controlled by the Salvation Army since 1947. It was used as apartments until about five years ago. While the exterior remains in good condition, the interior is in rough shape. A report prepared for Indiana Landmarks by Mansur estimated renovation would cost between $600,000 and $700,000. "As hard as I tried, I was not successful, particularly in this economic environment, in finding an end user willing to lease and spend a large sum of money to rehab," Mark Dollase of Indiana Landmarks wrote in an e-mail. "It had much going for it, but also much against it." The Metropolitan Development Commission approved the Salvation Army's request Wednesday. No date has been set for demolition. The Salvation Army had planned to use the space for parking but is now proposing green space.