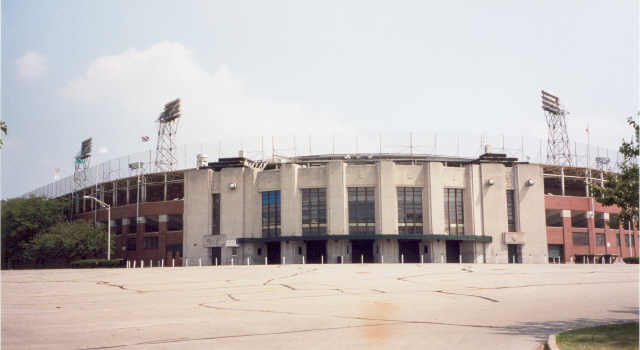 The Historic Landmarks Foundation of Indiana has added four new structures and an architectural feature to its annual list of the 10 Most Endangered Hoosier landmarks. Additions to the list include the Indiana Soldiersâ€™ and Sailorsâ€™ Childrenâ€™s Home in Knightstown, Jacobs Wild Animal Circus Barns in Peru, the Old Perry County Courthouse in Rome and the Snow Hill Covered Bridge in Franklin County. The only Indianapolis structure to make this year’s list is Bush Stadium (shown above), the former home of the Indianapolis Indians, which also made the list last year. One of the Top 10 was not a building but rather an architectural feature. The Foundation says historic windows are being replaced at “an alarming rate” mainly due to attempts at energy efficiency. “Well-maintained original windows will last much longer than vinyl replacements, sparing landfills of both the originals and the replacements,” the Foundation says. “In this era of necessary thrift and conservation consciousness, Historic Landmarks suggests returning to the save-and-repair ethic of earlier generations rather than falling for sales pitches that result in waste and drastic loss of architectural significance.” The Foundation removed three structures that appeared on last year’s listâ€” Indianapolis Public School #97, the Colgate-Palmolive factory complex and giant clock in Clarksville and the Jennings Building in New Castle.