Here are some end-of-year openings for eateries, and a few to look forward to early next year:

• Blue Sushi Sake Grill is expected to open in February in the Ironworks Hotel on the north side, according to Nebraska-based owner Flagship Restaurant Group.

The location at 2721 E. 86th St., west of the Fashion Mall at Keystone, will be Blue Sushi’s first in Indiana, and 13th overall. Others are in in Nebraska, Colorado, Texas, Kansas, Illinois and Kentucky. 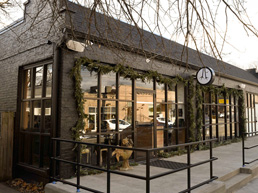 The fried chicken diner at 115 E. 49th St. (see photo at right) is in the space last occupied by Barking Dog Cafe and across from Hoover’s flagship Cafe Patachou.

Brown operates Pizzology in Carmel, and European restaurant Stella at 611 East St., with the Libertine bar in the basement.

• Burnside Inn opens Sunday at 314 Massachusetts Ave. The three-story bar, lounge and live entertainment spot is operated by serial entrepreneurs Ric Payne and Will Howe, who co-founded the Indianapolis-based Wild Beaver Saloon chain, among many other joint projects.

Also involved in the project is Kerry Payne, Ric's brother, who also is an owner of Wild Beaver Saloon. Jill Kelly Howe, Will's wife and a costume designer at Beef & Boards Dinner Theater, will be handling the entertainment booking.

Burnside Inn is named for Liberty, Indiana's favorite son, Civil War Gen. Ambrose Burnside. Although notable as a military man, inventor and politician, Burnside is best remembered today for his distinctive facial hair, which led to the term "sideburns."

The bar/restaurant is owned by Greenwood-based Johnson Hospitality Group, whose other offerings include Mucky Duck Pub on the south side and Spin Nightclub in Broad Ripple.

The restaurant will be in the Baldwin/Chambers building under construction on Rangeline Road near City Center Drive and should open next fall.

North of 96th reporter Lindsey Erdody had the scoop in October, before the official announcement.

• 36 East at 36 E. Washington St. downtown has closed after a four-year run—the latest in a string of restaurant casualties at the location.