The owner of a downtown apartment community wants to put the brakes on redevelopment of an adjacent property into a $36 million hotel complex, arguing that the city never properly released its rights to a street that would be enveloped by the project. 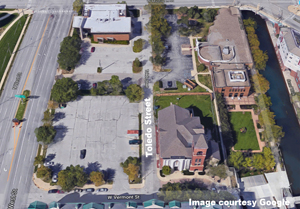 Canal Square Associates LP, the owner of Canal Square Apartments at 359 N. West St. along the Central Canal, is suing the city of Indianapolis and its Department of Metropolitan Development, in addition to Indy Canal Lodging Associates LLC.

Indy Canal Lodging is an affiliate of locally based Sun Development & Management Corp., which intends to build the dual-branded hotel on the site of the Bethel African Methodist Episcopal Church at 414 W. Vermont St. The site sits just north of Canal Square Apartments.

The thoroughfare in question is a section of Toledo Street, which runs directly west of the church. (Click on accompanying image for larger view.) Toledo Street runs north-south for just one block, from West Michigan Street down to West Vermont Street, which borders Canal Square Apartments.

Sun in 2016 received rezoning approval for the site and got the thumbs-up from the city’s Regional Center Hearing Examiner on its design for the 197-room dual Hampton Inn and Homewood Suites by Hilton.

On Nov. 30, the Regional Center Hearing Examiner approved design changes for the project, which were to be considered on Dec. 20 by the Metropolitan Development Commission.

But MDC members declined to hear the petition and continued it to a later date, citing the lawsuit filed Nov. 27 in Marion Superior Court.

The complaint charges that the city’s sale of the Toledo Street property to Sun was unlawful because it was never properly vacated and remains a public street. Canal Square Associates is seeking a permanent injunction preventing Sun from building on the site until the street is property vacated and Indy Canal gets ownership.

“If the proposed hotel project development proceeds as planned, then Canal Square and its tenants, guests and vendors (and the public as a whole) will unlawfully lose their right and ability to utilize the Toledo Street property as a public street for access to and from the Canal Square property,” Canal Square Associates said in the suit.

The origins of Toledo Street date to 1836, according to the complaint. In December 2016, the city’s Department of Metropolitan Development issued a request for proposals for the Toledo Street property. The city ultimately agreed to sell the property to Sun for $6,200 and executed a purchase agreement in July 2017.

The acquisition of the Toledo Street property is important to Sun’s overall plans to redevelop the Bethel church building and a surface lot to the west.

Sun’s plans call for two hotels to be housed in separate seven-story towers on the property. They would share amenities on the lower floors, including meetings rooms and lounges. The church itself would be renovated and retrofitted as part of the complex.

Attorney Mary Solada of Bingham Greenebaum Doll LLP, who represents Sun, declined to comment on the complaint, only saying “we are confident in our position.”

The city is contributing $8 million in so-called “developer-backed bonds,” a financing vehicle championed by the Hogsett administration.

The Bethel church was built in 1869 and had served the black community at the location for nearly 150 years. But dwindling membership and an aging building requiring costly repairs forced the congregation to sell the property.

Members are worshiping at The Unity Center, 2163 N. Illinois St., until funds can be raised to build a new church on Zionsville Road on the northwest side of the city.