I have often pointed out on this blog the irony that Obamacare—despite much bipartisan protest to the contrary—has actually helped advanced many conservative ideas on health care policy.

The report’s most interesting chart showed that while health insurance premiums have risen a “modest” 24 percent since 2010, the size of deductibles has soared by 67 percent.

In the chart below, the top line represents deductibles, the middle line is premiums and the bottom two lines are workers' earnings and inflation. 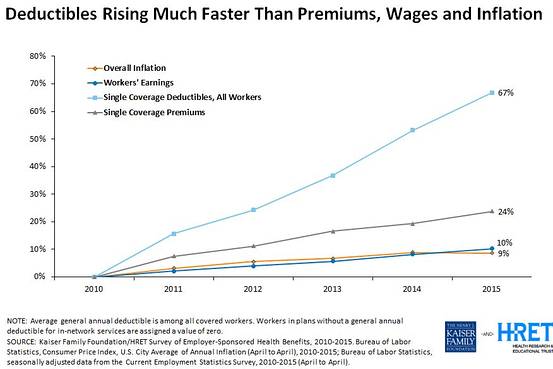 This is, in large part, one of the accomplishments of the Patient Protection and Affordable Care Act (aka Obamacare)—albeit an unintended one. By boosting the cost of insurance and introducing the first tax on employer health benefits since 1954, Obamacare pressed the accelerator hard on the small trend of consumer-driven health care plans.

Those plans, which typically pair a high-deductible health plan with a health savings account, had been a conservative cause célèbre since the 1990s, but didn’t pick up steam until George W. Bush’s Medicare Modernization Act of 2003 gave complete tax-free status to health savings accounts.

The Obama team didn’t want this. In fact, they set out to kill off health savings accounts.

Dan Perrin, president of the D.C.-based HSA Coalition (and a right-hand man of the late Pat Rooney, a health savings account pioneer), told me that in September 2008—crunch time before the presidential election—the Obama campaign took the time to send a staff person to meet with Perrin and make clear to him that, should Obama become president, there would be no place for health savings accounts.

Obamacare has spurred the expansion of high-deductible health plans and the health savings accounts that often go with them in two ways.

For individual insurance, Obamacare introduced a raft of new rules, which pushed the average cost of health insurance 24 percent higher than it would have been otherwise, according to a 2014 analysis by Yale University.

That left insurers few options for restraining the cost of health insurance other than hiking deductibles.

The second way, and the part that’s showing up in the Kaiser data, is Obamacare’s Cadillac tax. Starting in 2018, it will apply a 40-percent excise tax to each dollar that employers and employees spend on health benefits that exceed $10,200 for employee-only coverage or $27,500 for family coverage.

That means an employer would pay $400 for every $1,000 in spending on health benefits that exceeds those limits.

The Cadillac tax has caused employers of all stripes to boost deductibles in an effort to avoid triggering that tax. And that trend is likely to continue because the tax is set to rise at a slower rate than medical inflation typically has, meaning over time, more employers’ health plans will trigger the tax.

The problem with high deductibles  is that the cost of health care is still sky high—often too high for consumers to shoulder.

That’s why health care debates are beginning to move past the Affordable Care Act to focus on deductibles and the high cost of drugs, noted Drew Altman, CEO of the Kaiser Family Foundation.

“Public support may be gathering for a health-care agenda that focuses on consumer issues such as deductibles and drug costs, which means that soon the Affordable Care Act may not dominate the health agenda as it has since 2009,” Altman wrote in a Wall Street Journal blog post.

And consumers are, indeed, pushing back, causing some important changes. As I’ve written before, the proliferation of high-deductible plans is starting to create a real market for health care services, and that has prompted some unprecedented price cuts from health care providers.

But the main things making health care so expensive are 1) the roughly $1.5 trillion in annual spending or tax breaks the federal government gives to the health care system, and 2) the pervasive system of regulation that health care providers face from the rigid DRG and CPT systems that health insurance plans use to pay them.

It’s those things that the Obamacare law is trying to address under what’s called “value-based payments.” These efforts are designed to break out of some of the overly rigid methods traditionally used to pay for health care. And they will impact a much larger chunk of dollars than high-deductible health plans do.

The federal Medicare program wants to funnel half its spending through value-based payments by 2018, and many private health insurers have similar goals. But early results aren’t super encouraging.

Value-based payments are a far dryer topic than the $100,000 cost of new hepatitis and cancer drugs. But it’s the area that will prove whether Obamacare can truly live up to its name—protecting patients and making care more affordable.