Pete Dye on Thursday is scheduled to hit the ceremonial opening shot on his latest Indiana golf course.

The 90-year-old legendary golf course architect recently put the finishing touches on The Club at Chatham Hills, a course in Westfield snaking through a high-end residential community of the same name now under way. Dye said he spent countless hours over five years to complete the course.

Dye is known for creating some of the most beautiful—and in some cases most challenging—courses across the U.S. The Carmel resident built a number of courses in Indiana, including Crooked Stick, host of the 1991 PGA Championship and 2012 and 2016 BMW Championships. The seven-course Pete Dye Golf Trail is a major draw for Indiana tourism. 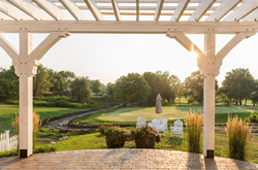 In designing Chatham Hills, Pete Dye tried to keep as much of the natural terrain as possible. (Image courtesy Chatham Hills)

Chatham Hills, a private club, already has 240 members (resident and non-residents) before the first tee shot hits the fairway, said Betsy Garfield, vice president of real estate acquisition for Henke Development Group, which is the developer of the project.

The larger Chatham Hills development includes nature trails, 40 acres of parks and a clubhouse with swimming, tennis, dining, bowling and a fitness center.

The club's initiation fee runs $15,000 for residents and $17,500 for a non-residents. The monthly membership fee will be $385. Garfield told IBJ that club officials are being careful to assure it maintains a private feel.

“We never want the club to be too full that a new resident can't join golf or existing golf members struggle with tee times," Garfield said.

But Chatham Hills officials are undaunted.

Henke Development officials were encouraged by this year's attendance (124,800) at the BMW Championship at Crooked Stick and the growth in youth golf in Indiana.

The progress on the Chatham Hills housing development has no doubt fueled the membership drive at the golf club.

Henke Development Group officials told IBJ in July the housing project is coming along faster than expected after breaking ground at the end of last year.

In 16 months, Steve Henke said the project had sold 145 homes—a significant increase in demand compared to his other massive housing project, The Bridgewater Club, which he began developing about 14 years ago. He said he only sold about 40 to 50 homes in the same time period at Bridgewater, which is similar in size but has fewer lots than Chatham Hills.

Henke told IBJ in July that he expects 100 homes to be under construction by the end of this year.

The project stretches north from 199th Street to State Road 38 and from U.S. 31 to west of Horton Road. When fully developed, which Henke estimated could still take 10 to 12 years, it could include 1,500 homes.

Henke thinks a big part of the popularity of the golf course and surrounding housing development is the rolling terrain, accented by babbling brooks and mature trees. The golf course, Henke said, was designed around natural features with the aim of leaving as much of the land as undisturbed as possible.

Chatham Hills homes are priced between $475,000 and $2 million—an increase from Henke’s original projection of $275,000 to $1 million when he introduced the project nearly three years ago. The neighborhood is intended to have a mix of younger families and empty nesters, Henke said, which should give the golf course a good demographic mix from which to pull members.